On Monday, June 5, most people in Qatar were fast asleep when neighbouring Bahrain announced it was cutting diplomatic ties with Doha, delivering the first of a series of coordinated diplomatic strikes that has left the region in disarray.

The news came at 5:50am local time, on the tenth day of Ramadan. Within 10 minutes, Saudi Arabia, the Gulf’s biggest power, had followed suit. The kingdom announced via state media that it was taking action to “protect its national security from the dangers of terrorism and extremism”.

By 6:20am, the United Arab Emirates had completed the troika. “It was bound to happen. It was something that was ready to explode,” Anwar Gargash, UAE state foreign affairs minister, later told the Reuters news agency.

At least three other countries, including Egypt, joined in later in the day.

But Oman and Kuwait, two other countries in the six-member Gulf Cooperation Council (GCC) – which includes Qatar – stayed neutral.

Qatar strongly denied the allegations against the peninsula which were used to justify a set of punishing measures as a “campaign of lies that have reached the point of complete fabrication”.

Despite mediation efforts led by Kuwait, the standoff continues.

On Friday, minutes after US Secretary of State Rex Tillerson urged Saudi Arabia and its allies to ease their blockade, US President Donald Trump issued a pointed message to Qatar that seemed to contradict Tillerson.

Here are some of the key points of the ongoing rift between Saudi and its allies, and Qatar:

Along with severing diplomatic ties, a Riyadh-led blockade was imposed against Doha. Saudi, which shares the only land border with Qatar, shut the crossing and stopped goods being transported to its gas-rich neighbour. Saudi later offered to allow food to enter, but Qatar declined, insisting that the siege should be lifted in full.

Saudi, UAE and Bahrain also closed their airspace to flights to and from Qatar, forcing airlines to remove Doha from their list of destinations. The move stranded thousands of passengers and resulted in lost revenues to airlines caught up in the rift. The International Air Transport Association pleaded that air links be restored, but its request has so far met silence. Qataris were even barred from transiting through the UAE.

Qatari citizens were also ordered out of the three countries, while Saudi, UAE and Bahraini nationals were told by their countries to leave Qatar within two weeks. The decision has been criticised as a violation of human rights. Bahrain later backtracked, telling citizens they can stay in Qatar.

Because of the dispute, the Philippines briefly suspended travel of Filipino workers in Qatar. But the measure was amended a day later, allowing vacationing workers to return to their jobs in Doha, and providing new employees with permits to leave.

Sea links were also cut. At the UAE’s port of Fujairah, vessels flying the Qatari flag or those destined for Qatar were not allowed to pass.

Tankers carrying liquefied petroleum gas from Qatar also had to change course in the Gulf of Aden, according to reports. Another ship was also diverted from Suez Canal in Egypt.

Even as countries, such as the UAE, blocked Qatari exports such as gas and aluminium, Qatar continues to let natural gas flow to UAE, making it possible for Dubai and Abu Dhabi to keep meeting their energy needs.

The Qatar pipeline pumps about two billion cubic feet of natural gas to Oman and UAE, according to a Bloomberg report. Imports meet about half of the demand of power plants in the Emirates.

As Saudi and its allies tightened the noose, other countries in the region stepped in.

Turkey and Iran opened their airspace to more Qatar flights. Both countries also offered food shipments after reports of panic-buying in the immediate aftermath of the rift. Iran said food shipments can reach Doha in 12 hours.

An estimated 40 percent of food items in Qatar are transported through Saudi Arabia. Qatar quickly said there was no need empty supermarket shelves as supplies are adequate.

Following the threats made against Qatar, its close ally, Turkey, voted to accelerate the deployment of troops to its base on the peninsula.

Turkey, which also enjoys strong relations with Saudi, said it would work to help resolve the crisis peacefully.

While Ankara’s move to deploy the soldiers is not anti-Saudi, it is clearly pro-Qatari, one analyst said.

As accusations heated up, Saudi signalled that it was escalating the fight in the media sphere – first by shutting down Al Jazeera Media Network’s local office in the kingdom.

“There was an unprecedented escalation from the [Gulf] mass media … but Qatar has not met this escalation with escalation,” Qatar’s Foreign Minister Mohammed bin Abdulrahman Al Thani told Al Jazeera in an interview.

There have also been reports of demands to shut down Al Jazeera entirely.

“Closing Al Jazeera’s bureaus is a political decision that amounts to censoring this TV broadcaster,” Alexandra El Khazen, the head of the group’s Middle East desk, was quoted as saying.

Later Al Jazeera reported that its media platforms had experienced a sustained cyberattack.

In the first hours of the diplomatic scuffle, the United States weighed in.

Secretary of State Rex Tillerson said it was important for GCC members to remain “unified”, adding that he did not think the rift would affect the fight against “terrorism”. The US maintains a military base in Qatar, its largest in the Middle East, with an estimated 10,000 troops.

Tillerson’s assurances, however, were thrown into doubt after US President Donald Trump wrote a post on social media referencing Qatar. Trump said leaders of the Middle East had stated that they “would take a hard line on funding extremism”. He later made a phone call to Qatar’s leader to offer help in resolving the crisis.

Instead of defusing the heated situation, Trump’s tweets led to more discord.

Hours later, Jordan downgraded its relationship with Qatar and revoked the licence of Al Jazeera to operate there. Mauritania also broke off diplomatic relations with Qatar, followed later by Senegal. Sudan, however, said it will not take sides in the rift. Eritrea also declined pressure to follow Senegal.

Meanwhile, Bahrain ordered a ban on showing sympathy to Qatar on social media, while the UAE warned its residents that they could face 15 years in jail and a fine of as much as $136,000, by posting messages of support for Qatar.

On Thursday, even as diplomacy continued with Trump and France’s Macron calling for dialogue, Qatar’s adversaries hardened their stance.

Earlier, Bahrain’s Foreign Minister Sheikh Khalid bin Ahmed Al Khalifa said his country “is open to any options to protect ourselves from Qatar”, as he demanded that Doha distance itself from Iran and “stop supporting terrorist organisations”.

Earlier, the anti-Qatar bloc demanded that Doha stops supporting groups like Hamas and the Muslim Brotherhood.

On Thursday evening, joint action by Saudi, UAE, Bahrain and Egypt placed 59 individuals and 12 organisations on a “terror list”, which included chairman of the International Union of Muslim Scholars, Yusuf al-Qaradawi, and 18 prominent Qataris.

The UN said that the agency was not bound by Saudi’s “terror list“, while Qatar said the list “reinforces baseless allegations hold hold no foundation in fact”. 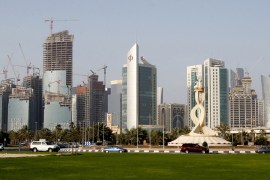