Why is this election important?

France is choosing its next president. The election is being closely watched because, for the first time in modern French history, neither of the two candidates in the decisive second round is from the mainstream parties of the left or right.

“The Republicans – which is on the right – and the Socialist Party on the centre left represented only 26 percent of the total votes from the first round, which is the lowest cumulated score for France’s two main parties in the history of the Fifth Republic,” Pierre Bocquillon, a lecturer of politics at Britain’s University of East Anglia, told Al Jazeera.

“They are perceived as disconnected from citizens, not delivering on their promises and conducting similar policies when in power. More than a victory of the challengers, it is first a spectacular failure of both the Socialist Party and The Republicans.”

Frontrunner Emmanuel Macron, 39, is a centrist running as an independent and launched his own movement just last year – “En Marche!”. He was previously an economic minister under the socialist government of outgoing President Francois Hollande .

His 48-year-old rival Marine Le Pen, leader of the far right, recently stepped down from the National Front (FN) party that raised her. The move was seen as part of her efforts to distance herself from the racist roots of the party, which was founded by her father Jean-Marie Le Pen in 1972.

France is a founding member of the European Union , and this election could lead to the bloc’s ultimate downfall.

While Macron is a great supporter of the EU, Le Pen rails against it at every opportunity. She has promised a referendum on France’s membership, in the hope the country will “Frexit” in Britain’s footsteps.

Other hot topics in the campaign have included: unemployment, security of the economy, workers’ rights, globalisation, immigration,  refugees and secularism.

Further underlining the unpredictable nature of this election, on Friday – with one and a half days to go until the vote – nine gigabytes of data from Macron’s team was posted online in the final hours of campaigning.

WikiLeaks has said the dump was authentic, though did not claim responsibility.

The leak comes in the wake of accusations that Russia attempted to hack the 2016 US election .

Macron’s team has said the “hacking” is an attempt at “democratic destabilisation”.

To find out more about the two leading candidates,  click here . 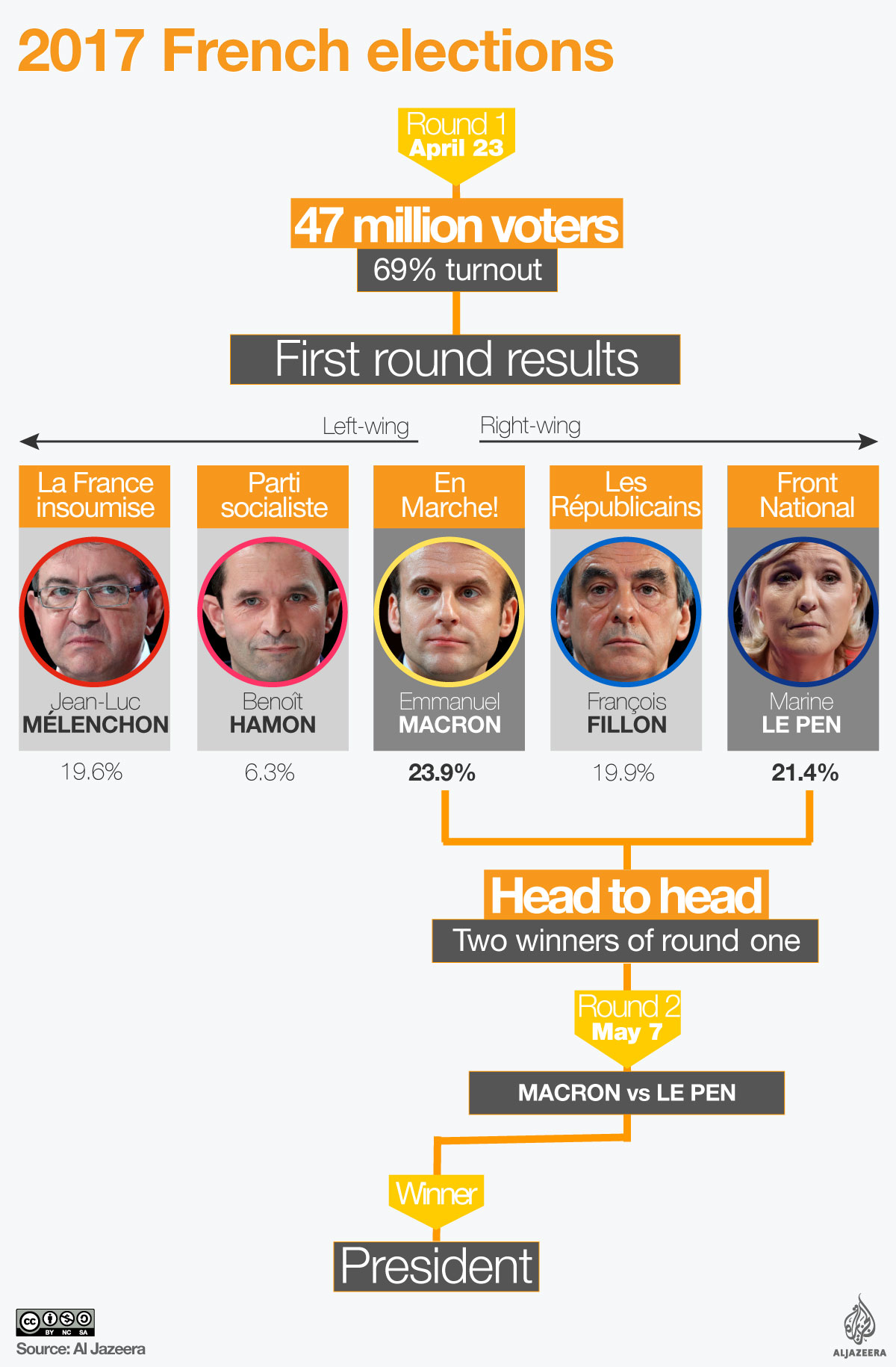 In the first round, Macron won 23.9 percent of the vote compared with Le Pen’s 21.4 percent. Polls before the campaign blackout on Sunday’s vote showed Macron winning to the tune of around 65 percent of the electorate.

After an unprecedented televised debate between the rivals on Wednesday, he gained one point in the polls as Le Pen was on the defensive, appearing to many as a less convincing leader.

Macron is likely to attract voters who cast their ballots for the traditional left and right candidates in the first round on April 23, losers Benoit Hamon and Francois Fillon. Both have urged their supporters to pick Macron.

However, Jean-Luc Melenchon, a far-left candidate, won more support than Hamon at the initial April 23 round, and it is less clear what his supporters intend to do. Some say they will cast blank votes, others have indicated they will vote for Le Pen. Unlike several other leading politicians, Melenchon has refused to call on his fans to back Macron.

Polls failed to predict two major recent events in the West: Britain’s decision to leave the EU and the election of US President Donald Trump . And it is these two surprises, many analysts say, that mean anything is possible.

Another common subject is whether or not another attack on French soil would boost Le Pen, who ritually condemns what she calls “Islamic terrorism”.

However, polls hardly moved after an attack before the first round, in which French national Karim Cheurfi killed a policeman on the famous Champs Elysees.

“I would say it’s unlikely – not very unlikely that Le Pen would win,” Nacira Guenif, a sociologist and professor, told Al Jazeera.

“Even if she fails, to some extent she has already won … This is the most depressing, preoccupying statement you can make. She has won in many ways. She will pollute and invade the public debates, the political issues for a long time.”

How has the far-right managed to get so far?

The last time the far right made it this close to running France was in 2002, when Marine’s father, Jean-Marie Le Pen, was up against the right-wing Jacques Chirac, who ultimately won.

Then, Le Pen won just 18 percent of the vote as millions rushed to keep the extreme right out.

However, the younger Le Pen appears more of a mainstream player compared with party figures during the ruling period of her father – an outright racist who served in the Algerian War, during which it was later discovered he had carried out torture.

She is also riding a gripping populist wave, presenting herself as “the candidate for the people” and slamming, among other things: immigration , refugees, French minorities including Muslims, the EU and euro, globalisation, foreign workers, and taxes (except on foreigners).

“This is a moment when we realise how successful the NF has been in imposing some of its ideas on a part of the mainstream right, even though they only have four MPs and Le Pen will be defeated,” Jean-Yves Camus, director of the Observatory of Radical Politics at the Jean Jaures Foundation, told Al Jazeera.

What do other countries make of it all?

Western Europe’s far right are watching this election closely. A Le Pen win would give them a significant boost.

Among her supporters are Geert Wilders, an Islamophobic Dutch politician who recently lost an election, and Nigel Farage, the former leader of the populist United Kingdom Independence Party.

In January, she travelled to the Trump Tower in New York, sparking speculation that the new US president was among her allies. Trump tweeted a mysterious message during the first round: “Very interesting election currently taking place in France”.

France: Who are Emmanuel Macron and Marine Le Pen?

Russian President Vladimir Putin officially welcomed her to Moscow in March, saying she represented a “quickly developing spectrum of European political forces”, but denied interfering in the political process.

As for Macron, Barack Obama , the former US president, threw his support behind the former investment banker on Thursday. Macron is said to have taken inspiration from Obama’s grassroots campaign strategy.

Meanwhile, Angela Merkel , the German chancellor, said she believes Macron would be a “strong president” for France.

Though British prime minister met Macron, she has not – unlike the UK’s Labour, Lib Dems, Greens and SNP opposition parties – endorsed him.

In the short term, if Macron wins, there is expected to be a greater sense of calm and security on the streets than if Le Pen wins the presidency.

In the immediate aftermath of the vote, if the far-right candidate does succeed, clashes on the streets are expected as anti-fascists and other demonstrators express their anger over the result.

Even so, Macron’s popularity is by no means universal.

At a protest in Paris on May 1, which turned violent, thousands of demonstrators chanted “Ni Le Pen, ni Macron” translating to “Neither Le Pen nor Macron”.

Once elected, the French president can serve a maximum of two five-year terms in office.

Parliamentary elections are expected in June. Early polls suggest Macron’s party will emerge as the largest, followed by conservative parties. The far right is expected to come out last.