German leader Angela Merkel said on Saturday that US President Donald Trump’s G7 partners remained in the dark about his intentions on climate change, calling the debate at a summit in Sicily “very unsatisfactory”.

“The whole discussion on the topic of climate was very difficult, not to say very unsatisfactory,” Merkel said, as the two-day G7 summit of some of the world’s wealthiest nations in the seaside town of Taormina, Sicily, drew to a close.

“Here we have a situation of six against one, meaning there is still no sign of whether the US will remain in the Paris accord or not,” she added.

A final G7 communique on Saturday said that all member countries – except the US – had reaffirmed their “strong commitment” to abide by the 2015 Paris climate agreement to rein in greenhouse gas emissions.

READ MORE: Seven things you need to know about the G7 summit

Trump says he will make a final decision on whether the US will stay in the Paris climate agreement next week.

But Gary Cohn, Trump’s economic adviser, on Friday said the president had told his G7 colleagues that he regarded the environment as important.

“His views are evolving, he came here to learn,” Cohn said. “His basis for a decision ultimately will be what’s best for the United States.”

The US is the world’s biggest carbon emitter after China.

Al Jazeera’s Laurence Lee, reporting from Taormina, said the picture that had emerged from the summit was largely of one against six, particularly as the other countries tried to explain their belief in the importance of the Paris accords.

“You sort of get the sense that he doesn’t feel comfortable in this group,” he said.

“It’s a bit like what Vladimir Putin was like when Russia was in the G8; [looking] a little bit separate, looking a bit surly and like he doesn’t really belong here. [Trump] seemed to be much more comfortable in Saudi Arabia and in Israel,” said Lee.

Lee said that the US had apparently won some battles at the summit, particularly regarding refugees.

Italy was disappointed not to receive more backing for its call to open up more legal channels for immigration to try to slow the flow of people risking their lives to reach Europe on flimsy boats from lawless Libya.

“That was very much Donald Trump’s doing because he said [the US] didn’t want to take any more refugees just because the G7 wants to,” reported Al Jazeera’s Lee.

Reuters reported that a European diplomat, who declined to be named, said: “There was very strong opposition by the Americans and British who wanted to refocus on security and water down the expansive language on freedom of movement.”

The G7 also stated that they are ready if necessary to slap extra sanctions on Russia if it continues failing to honour its commitments on Ukraine, the summit declaration reads.

“Sanctions can be rolled back when Russia meets its commitments. However, we also stand ready to take further restrictive measures in order to increase costs on Russia should its actions so require,” the final statement read.

The G7, urged on by Japan, also adopted common language against North Korea after a series of missile tests by the nuclear-armed nation. The G7 statement said that North Korea poses an increasing threat of a “grave nature” to international peace and security.

The G7 leaders also reached agreement on improving cooperation against terrorism in the wake of the bomb attack on a concert in Manchester on Monday night that left 22 people dead and dozens wounded.

There was relief that Trump agreed to language on trade in the final G7 communique that commits to a rules-based international trade system.

The final declaration pledged to “fight against protectionism” while “standing firm” against “unfair” trade practices.

The issue is sensitive because Trump has questioned free trade policies normally traditionally championed by the G7.

His treasury secretary, Steven Mnuchin, has said the US reserves the right to be protectionist if trade arrangements are unfair to US companies and workers.

INSIDE STORY: Is Donald Trump against free trade?

The G7 is an informal gathering that meets every year under a rotating chairmanship. Its decisions are not binding as an international treaty would be simply representing the leaders’ political commitments.

The final communique was just six pages long, against 32 pages last year, with diplomats saying the leaders wanted a simpler document to help them to reach a wider audience.

The G7 countries are: Canada, France, Italy, Japan, Germany, the US, and the UK. The European Union also attends. 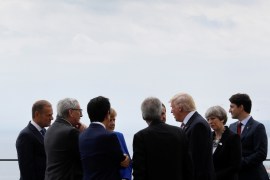