Five years ago today, Egypt witnessed the overthrow of its first democratically elected president, Mohamed Morsi, in a military coup.

The Muslim Brotherhood member had been in office for just a year when army chief, General Abdel Fattah el-Sisi, announced on July 3 Morsi’s overthrow on state television, along with the suspension of the constitution and the installment of an interim government.

The military said it was responding to the people, who had poured into the streets by the millions on June 30, 2013, over fears that Morsi was becoming increasingly authoritarian.

In just over two years, Morsi became the second Egyptian leader to be toppled. During a wave of popular uprisings that swept across the Arab world in 2011, the Egyptian people also overthrew the 30-year dictatorship of military leader Hosni Mubarak.

The social and political upheaval during those years plunged Egypt into an economic crisis and deeply divided the nation.

But Sisi’s rise to president in June 2014 was meant to herald a new era of stability.

Sisi, who was recently re-elected, introduced rapid economic reforms, such as slashing fuel subsidies and raising taxes in an effort to ease unemployment and generate long-term revenues. He also initiated several new infrastructure projects, including the expansion of the Suez Canal and the country’s farmland area, which he said would make Egypt more self-sufficient and generate jobs. As violence dwindled, tourism revenues increased.

Yet experts say the temporary stability, which has gradually eroded, came at the cost of public freedoms.

Dalia Fahmy, a professor of political science at Long Island University in New York, says the “promise of stability through the military has led to further uncertainty,” pointing to developments such as the imprisonment of 60,000 political prisoners, torture of 830 people in 2016, and the blocking of 434 websites.

“The question is, will the state under Sisi be able to survive the post-coup repression and economic uncertainty?” Fahmy told Al Jazeera.

In March 2018, it was announced that Sisi won 92 percent of valid votes in the presidential election, after he eliminated any real opposition. At least six other candidates pulled out of the race, were prosecuted or jailed upon announcing their intention to run for elections or during their election campaigns.

READ MORE: Egypt campus – The students versus the regime

Shortly after Morsi’s removal, the military-backed interim government embarked on a crackdown against Muslim Brotherhood supporters, many of whom continued to stage counterprotests and express their support for Morsi.

In August 2013, the army and security forces attacked a demonstration in Rabaa al-Adawiya Square, killing some 1,000 Morsi supporters. Human Rights Watch described it as “one of the largest killings of demonstrators in a single day in recent history”.

And in a widely criticised mass trial, Egypt sentenced hundreds of alleged supporters of the Muslim Brotherhood to death – “the biggest mass sentence given in modern Egyptian history”, according to Amnesty International. The movement, which is Egypt’s oldest, most influential Islamist group, was also banned and had its assets seized before being declared a “terrorist organisation” by the government.

The final ruling for the trial, involving 739 people facing a death penalty, was recently postponed due to “security concerns”.

Abdullah al-Arian, a professor of history at Georgetown University’s School of Foreign Service in Qatar, told Al Jazeera the Egyptian government’s actions send “a stark message to all Egyptians that under the resurgent authoritarian rule of the Sisi regime: Dissent will not be tolerated”.

The arrests have extended well beyond Muslim Brotherhood supporters. The Egyptian government has also been systematically targeting journalists, leading activists and any critics of President Sisi.

The case of photojournalist Mahmoud Abu Zeid, also known as Shawkan, has caught international attention. Abu Zeid has been in jail since August 2013, after he was arrested while taking pictures as Egyptian security forces violently dispersed the Rabaa sit-in.

“The state of oppression in Egypt has sunk so low that al-Sisi’s forces are arresting well-recognized activists as they sleep, simply for speaking up,” Sarah Leah Whitson, Middle East and North Africa director at Human Rights Watch, said in a statement on May 31, 2018.

A few months into office, Sisi passed a law banning demonstrations without prior police approval, leading the protest movement to practically dry up. Such oppressive measures, analysts say, were bound to tighten the noose on the country and bring in a facade of stability.

“Many Egyptians just wanted economic and political stability; hence, the support for the Sisi coup. Immediately after Sisi took power, Saudi and Gulf money began to flow into Egypt, temporarily stabilising the Egyptian economy and winning for Sisi the support Morsi had squandered,” James Gelvin, a professor of Middle East history at the University of California, Los Angeles, told Al Jazeera.

“Egypt is much more authoritarian today than it was under any leader since Gamal Abdel Nasser … Under Sisi, all oppositional activity has been outlawed, the Muslim Brotherhood banned, and political opponents – whether Islamist or secular – killed, imprisoned and tortured.”

Under Mubarak, there was not much room for dissent, but there were clear red lines. People could mostly go about their business, as long as they did not criticise Mubarak, Islam or the security forces. Today, no one is safe.

Human rights defenders, civil society groups and NGOs have also been targeted, systematically summoned for questioning, banned from travel and having their assets frozen. A law, signed in May 2017, criminalised the work of many NGOs and placed them under the direct surveillance of the country’s security bodies.

“Under Mubarak, there was not much room for dissent, but there were clear red lines,” Sarah Yerkes, a fellow at the Carnegie Endowment for International Peace think-tank, said.

“People could mostly go about their business, as long as they did not criticise Mubarak, Islam or the security forces. Today, no one is safe. The government is fractured, so there is no clear line of control, and anyone can become a target of the regime at any time,” Yerkes told Al Jazeera.

Despite electing him to power, millions came out against Morsi’s moves to grant himself broad legislative and executive authority. Many people, mainly secularists and members of the old guard, feared that the uprising could end badly. The chaos that gripped Syria and Libya after the Arab Spring served as a stark warning to the public.

“With 30-40 percent of the country living on $2 a day or less, there is very little room for manoeuver for them,” Mark Levine, a professor of Middle East history at University of California, told Al Jazeera.

“If the country grinds to a halt with new protests, literally millions of people face financial ruin and even hunger very quickly,” Levine added.

While Sisi’s public standing went largely unchallenged during his first two years in power, a series of decisions tested his popularity and grip on the country.

In 2016, the government announced a maritime agreement with Saudi Arabia to transfer control over two Red Sea islands, leading thousands to take to the streets in peaceful protests. In response, the government sentenced 71 people to two years in prison.

Cracks in the economy have also resurfaced. In May 2017, Egypt’s inflation rose to 30 percent, the highest in three decades. Under a $12bn IMF bailout loan to support Egypt’s economic reform plan, the government floated the currency and raised the price of fuel by 55 percent for the second time in months.

The other large domestic threat Egypt is facing is the violence in the Sinai, where armed groups, affiliates of the Islamic State of Iraq and the Levant (ISIL, also known as ISIS), launched an open war against the government, security forces and civilians.

Despite promises for reform and improvement in the Sinai Peninsula, home to 1.4 million people, the Sinai uprising continues to pose one of the biggest challenges for Sisi’s government. Analysts have long criticised Sisi’s use of “brute force” in the peninsula rather than finding remedies of the underlying issues heightening the violence there.

And while the government claims it has the issue under control, its efforts to contain the violence in the Sinai, which dates back to before 2011, have been largely unsuccessful.

“The government has faced a serious terrorist threat and received some criticism for its handling of it. The country is clearly less secure, but this is also a result of regional trends, especially the rise of ISIS,” Issandr el-Amrani, head of the North Africa section at the International Crisis Group, told Al Jazeera.

Though Egypt’s position on the international front seems to be strengthening as it forges closer ties with the United States, Saudi Arabia and Israel, analysts say that domestically, Egypt is on the decline.

“Egyptian society is being crushed by the weight of economic disorder, and social and political repression,” said Fahmy. 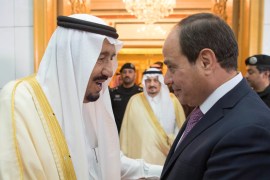 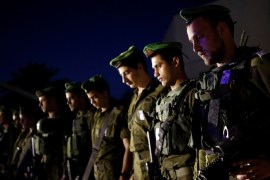