It was 20 years ago, but Jose still remembers first glimpsing the Russian classic by Leo Tolstoy in the rubbish outside a home in Bogota’s Bolivia neighbourhood. The rubbish collector loaded his truck with the rest of the waste, but took the book home. It was the start of a wonderful obsession.

Today, the 55-year-old lives on a steeply sloping road in the La Nueva Gloria barrio, in the southern reaches of Colombia‘s sprawling capital.

The outside of his modest two-storey house blends in with its neighbours, but inside, it couldn’t be more different. This is the home of La Fuerza de las Palabras, Spanish for “The Strength of Words”, a community library.

“In August, it will be 17 years since we created this library,” Jose says.

Jose’s family used to rent out the downstairs to tenants. They still live on the first floor, but books have invaded all three rooms on the ground floor. There, you cannot see the tiles, except for a narrow pathway that winds through the rooms. It is bordered with stacks of books which brush the ceiling – the last time Jose counted, there were some 25,000 – and it feels like every day more books find him. The library has begun to send tendrils into the upstairs family space as well. An entire wall and some new shelves in their dining area are covered in novels.

‘A PhD in marginalisation and poverty’

Jose returns to the library to meet me after an early morning shift for the local municipal council. He has worked for four different public and private waste management outfits in the last 20 years and his duties have taken him all over Bogota. In his mind, he holds a map of the best places to find books.

Generally, rich and prosperous northern Bogota is good for hardcovers and rare editions; the south is where he finds the paperbacks. No one ever seems to mix the books with organic waste; instead, they are left out in separate boxes or bags.

As Jose’s collection has grown, so too has his fame. The other drivers at the municipality used to think that Jose was crazy, but now they help out, bringing him whatever books they discover in the rubbish.

Local newspaper headlines hailing him as “Colombia’s Lord of the Books” have brought more donations pouring in. He has been invited to share his story at events in Colombia and abroad, including at the Guadalajara International Book Fair in Mexico, the largest of its kind in Latin America.

Jose has become a conduit connecting book lovers – La Fuerza de las Palabras has donated reading materials to some 235 schools, institutions and community libraries across Colombia. In fact, one of their first contributions was to his neighbourhood’s only school, which is down the road from his house. The school did not have a library until Jose rolled up.

Bogota is famed for the beauty of its public libraries, but they tend to be in the north, leaving low-income neighbourhoods, like La Nueva Gloria, completely deprived.

“This neighbourhood used to be just miserable,” Jose says. “I grew up here and I can tell you it got me a PhD in marginalisation and poverty. Kids here don’t have a place to study; instead, they have to start working early.”

He credits his own love of reading to his mother, who would put him to bed with a book every night, even though they were too poor to keep him in school.

Jose believes getting an education can help break the cycle of poverty.

Every kid who participated in those sessions has gone on to university, including my daughter.

“The whole value of what we do lies in helping kids start reading,” he says, explaining that he got the idea for the library only because visitors to his house would ask to borrow books to help their children prepare for school.

It’s a vision shared by volunteers from other countries, such as Denmark, Norway, France and South Korea, who have come to spend time at La Fuerza de las Palabras.

Colombian writers and poets also have made a point of visiting.

“There was a cultural exchange with all the kids from the neighbourhood,” Jose says.

“Every kid who participated in those sessions has gone on to university, including my daughter.”

This year, La Fuerza de las Palabras received a donation of an ambulance for Jose to convert into a mobile library.

His oldest child, 29-year-old Maria Angelica, takes on most of the responsibility of running the library, he says with pride, adding that his son Johann Sebastian, 25, helps with the administration and budget.

His youngest daughter, Merylin Marcela, 19, drives the ambulance and helps pick up and deliver books.

Jose’s most reliable partner, however, is his wife Luz Mery. She answers the phone, helps children find their books and organises book readings and other events at the library.

A seamstress by profession, Luz Mery was willing to forego the rent they could have earned from leasing out the downstairs rooms.

This fills Jose with gratitude.

He is an example for society.

“She has so much of work to do for the library, that I now try to help her with the housework,” he says.

For her part, Luz Mery sees herself as equally committed to La Fuerza De Las Palabras.

They have managed to stretch the fees she earns from stitching, and Jose’s salary from the municipality, to pay for many programmes at the library, such as informal readings and gatherings.

Their shared project continues to drive a personal transformation as well.

Jose was over 50 when he went back to high school.

“It took me three years to finish,” he says. During that time, his schedule was hectic. He would work nights, come back home for a nap at 7am and wake again to go and study at 11am.

His teenage classmates were fascinated and welcomed him. Luz Mery is proud.

“He is hardworking and persistent,” she says of her husband. “He is someone who committed what little time he had available to volunteer. He is an example for society.”

Travelling across Colombia in a truck of books

There are exciting times ahead for the library. One sponsor has donated land and the Gutierrez family are collecting funds to build a real library for the community on it.

Over the years, Jose has amassed an incredible collection, including beautifully illustrated antique encyclopaedias and a set of vinyl recordings which he listens to on a turntable in his dining room.

He also has a small collection of newspapers dating back to historic moments, such as the 1948 assassination of Jorge Eliecer Gaitan – a charismatic liberal politician who many hoped would become Colombia’s president. In the days immediately after Gaitan’s murder, Bogota was gutted by riots and his killing eventually led to the founding of the Revolutionary Armed Forces of Colombia, or FARC, and 52 years of war between the state and the armed group.

Jose hopes to create an archive in the new building to house everything he has collected.

Unfortunately, the computers installed in the mobile library were stolen when the truck was broken into recently.

Jose hopes they will be able to eventually replace them and help La Nueva Gloria’s children master basic computer literacy.

Having finished high school, Jose is ready to write a book about his experiences, but it won’t take the conventional approach of an autobiography. Instead, he intends to structure it around the 60 books that have driven his own personal metamorphosis. His favourite is the short story Father Sergius by Leo Tolstoy, which is about a Russian prince and military lieutenant who becomes a monk. He says he likes the historical story because it is full of themes around faith and inspiration.

His own book will be quite the tale. A lot has changed in his life, but he can still recall what it was like when he first began collecting the books.

“Lots of people mocked me. They would laugh when they found out about my project. But now 20 years later, they are amazed,” says Jose, adding that “my dream is to exchange my garbage truck for a truck full of books, and travel the country.”

He pauses to savour the thought. Then says: “I am sure I will pull it off.”

The author is a Gabriel Garcia Marquez Cultural Journalism Fellow for 2017. 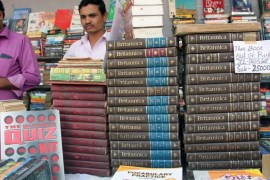 India: For the love of second-hand books

The second-hand book stalls at the Vijayawada Book Festival intrigue customers with a dose of nostalgia. 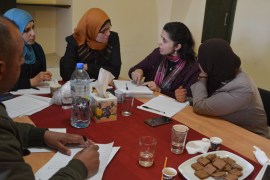 Project aims to preserve seeds of crops that once grew across historic Palestine, and to safeguard waning biodiversity. 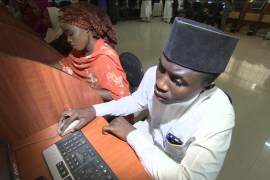 An ambitious offline project plans to give millions of students in the developing world access to online resources. 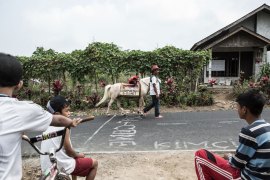