Serang, Central Java, Indonesia – The sun had not yet risen on the eastern horizon, but 42-year-old Ridwan Sururi was already busy tending the horses.

The father of five fed the animals while grooming them and cleaning their barns. As a horse caretaker, he has been performing these duties for a long time in his home village of Serang at the foot of Slamet volcano in Central Java. But since December 2014, he has also been running another enterprise: Kudapustaka, a small mobile library.

Sururi takes the library around the village and nearby areas on one of his horses on Tuesday, Wednesday and Thursday every week.

The idea for Kudapustaka came to him during a conversation with Nirwan Arsuka, a fellow equine lover from Jakarta. The two agreed they wanted to do something good and meaningful for the environment and community, and Arsuka suggested the mobile library on a horse.

Arsuka donated 136 children’s books as a start, and Sururi took them around on his white mare, Luna. Now, with more and more people having heard of Kudapustaka thanks to social media as well as local and international media coverage, the number of books donated has reached the thousands.

Sururi headed to Elementary School 5 in Serang with Luna. At 9am, after the bell rang for the first break, the children ran out of the classrooms and bustled around him to borrow or return books.

According to data from UNESCO, Indonesia has succeeded in bringing adult illiteracy rates down from 15.4 million in 2004 to 7.5 million in 2010, and those rates continue to decrease. 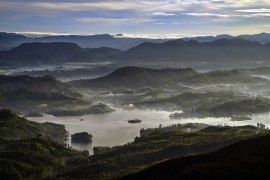 The tea plantations in the highlands of Sri Lanka supply the leaves that fill tea cups across the globe.