“Prince Philip carries out final official engagement,” the BBC informed the world on August 2, 2017. “The Duke of Edinburgh met Royal Marines in his final solo public engagement before he retires from royal duties.”

There is an air of historic solemnity in the tone of the BBC. “The 96-year-old announced his retirement in May, after decades of supporting the Queen as well as attending events for his own charities and organisations. Prince Philip has completed 22,219 solo engagements since 1952.” In 1952 I was one year old. The year after that, the MI6, the military intelligence outfit of the Duke of Edinburgh’s government, helped the CIA to stage a coup in my homeland. The BBC would not say which one of those 22,219 royal duties coincided with that occasion.

On this occasion, instead, the BBC did what it does best: pointed to a truth but camouflaged it with a number of choice euphemisms that completely distort what it seems to mark. Prince Philip – how shall we put it gently here – is a rank racist. His racism is a public secret. Everyone knows it. The Prince himself habitually stages it. So the BBC needs to report it, though in a typically BBC kind of a way – by making it frivolous and innocuous.

“Prince Philip’s gaffes from decades on royal duty,” the BBC headlines it. So the good Prince’s astonishing utterances are not what they are, symptomatic of a deeply racist mind. They are just “gaffes” – unintentional and unfortunate remarks causing embarrassment, things he should not have said, and did not really mean, but unfortunately did say. That’s why they are “gaffes”.

The BBC then moves to colour these vintage racist utterances with even thicker brushes as “memorable one-liners that can make some people chuckle and others cringe”. That is meant to cancel the “cringe” with a “chuckle” and come up with a neutralising cough. The rest is entirely standard BBC lore chiselling at brutish facts with etymological gymnastics: “Prince Philip is renowned for speaking his mind – often explained as his attempt to lighten the mood – and that outspoken nature has at times led to controversy with some of those remarks teetering on the edge of being offensive.”

Such vintage BBC phrases ought to be studied at Columbia School of Journalism and other such reputable places as exercise in sheer charlatanism. “Speaking his mind” is lovely, isn’t it? “Lightening the mood” he does – doesn’t he? Fabulous indeed! “Outspoken” is our lovely Prince – isn’t that courageous! Every turn of phrase is brushed thickly to sugar-coat a bitter truth.

Now let’s look at some of these “attempts to lighten the mood”:

“Everybody was saying we must have more leisure. Now they are complaining they are unemployed” (during the 1981 recession).

“You are a woman, aren’t you?” (in Kenya after accepting a small gift from a local woman).

“If you stay here much longer you’ll all be slitty-eyed” (to a group of British students during a royal visit to China).

“You can’t have been here that long, you haven’t got pot belly” (to a Briton he met in Hungary).

“Aren’t most of you descended from pirates?” (to a wealthy islander in the Cayman Islands).

“How do you keep the natives off the booze long enough to pass the test” (to a Scottish driving instructor).

“It looks as if it was put in by an Indian” (referring to an old-fashioned fuse box in a factory near Edinburgh).

“Still throwing spears?” (question put to an Aboriginal Australian during a visit).

“There’s a lot of your family in tonight” (after looking at the name badge of businessman Atul Patel at a Palace reception for British Indians).

“The Philippines must be half-empty as you’re all here running the NHS” (on meeting a Filipino nurse at Luton and Dunstable Hospital).

Prince Philip to European aristocracy is what Donald Trump is to American liberal democracy: an embarrassment - the men who flaunt the ugly truth from under the thin veneer of their bourgeois etiquette.

There are other even more remarkable gems that the BBC has of course not listed but others have. But these should suffice.

BBC’s transparent attempt at whitewashing notwithstanding, Prince Philip’s racism is actually quite priceless because it comes so naturally to him. He is not faking it. He is not trying to offend anyone. He is offensive. This is he. This is who he is – and the long panoply of his racist, sexist, elitist, misogynistic, class-privileged and unhinged prejudices is a mobile museum of European bigotry on display.

The Duke of Edinburgh has done the world an extraordinary service by being who he is, by staging generous servings of his bigoted disposition and he is retiring happily with having catalogued all or at least most of his priceless inventory for posterity to read and learn.

Our dearly beloved Duke of Edinburgh is blissfully old. He has lived a long, rich, and fulfilling life – and may he live the rest of his racist days with the dignity and poise that he has denied others. His xenophobic bigotry is pure, his sense of class entitlement undiluted, unencumbered, uncensored, liberated from any inkling of bourgeois inhibitions. He does not mean to be offensive. He just is. He is a walking embodiment of every layered lava of European racism summed up inside one royal head.

Today people of the privileged class have learned how to camouflage their racism in varied codes and convoluted bourgeois euphemism. The kind of bigotry that Prince Philip exudes and stages is now considered rude and vulgar, old-fashioned and outmoded, presumed classed and pointed at the lower social strata. The precious advantage of Prince Philip is that he is a royal from the heart of British (and European) aristocracy. He tells it as he sees it fit.

The Prince is the repository of all the colonial past and all the class privileges of the present. His racist remarks should not be whitewashed or camouflaged. They need to be properly, accurately, and verbatim catalogued in the British Library and made available to future generations of scholars and critical thinkers, anthropologists of the racist foregrounding of European imperialism for careful and close analysis. They are the insignia of an entire semiology of colonial racism in full-blown aristocratic diction. From the rampant racism now dominant in Israel to pernicious xenophobia evident in Trump’s America, it’s all there: rooted in these unhinged expletives in polite, aristocratic British English.

Expressions of Prince Philip’s racism are not “gaffes” as the BBC and other British outlets embarrassed by their vulgarity brand them – though one can see why the BBC is rushing to term them as such and brush them quickly under the proverbial carpet. For the world at large, however, at the receiving end of British and European racist colonialism, these “gaffes” are in fact priceless relics of an age now deeply camouflaged under lovely-looking and liberal euphemisms. We as a result need to treat them as archaeologists treat any other relic and fragment they find. Based on such remains, they reconstruct bygone ages and the forgotten truths they reveal and conceal at one and the same time.

The guilty conscience of a fallen empire

The kind of racism Prince Philip exudes is reminiscent of the very spirit of British and other European imperialism at its height. This is the way the British thought when they ruled India, the French when they ruled Algeria, the Italians when they conquered Libya, the Belgians when they owned Congo.

Prince Philip is a museum piece – a living, breathing, mobile, jolly good fellow, smiling, handsome, charming great-grandpa who happily walks about, utters obscenities while his entourage try to cover up for his “indiscretions”. But these are not “indiscretions” or “gaffes.” He means what he says and he says what he means. He is the living memory of an entire history of imperial hubris now being actively repressed to offer a more liberal, tolerant, cosmopolitan character for the British and, by extension, “the European”. 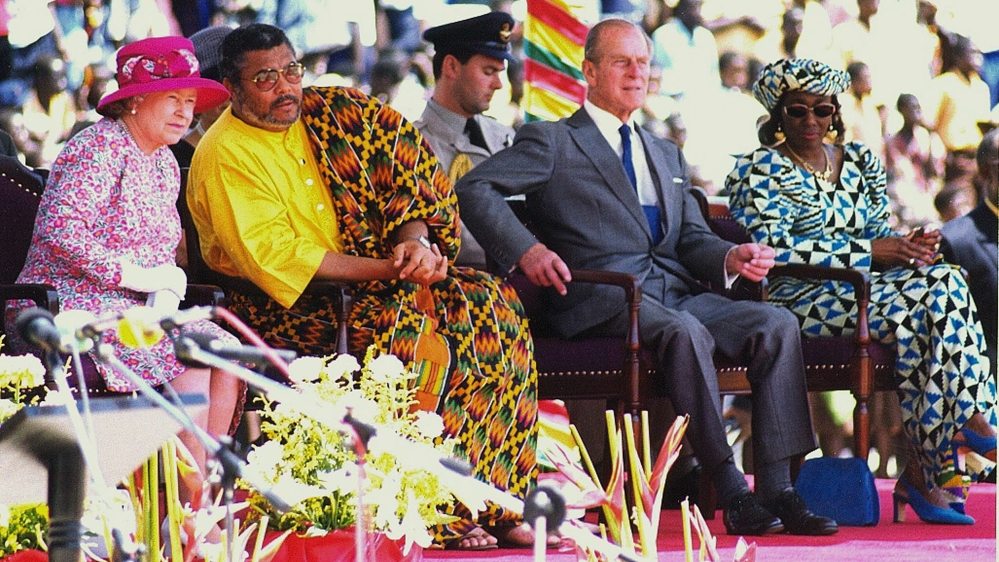 Prince Philip to European aristocracy is what Donald Trump is to American liberal democracy: an embarrassment – the men who flaunt the ugly truth from under the thin veneer of their bourgeois etiquette. The racist provincialism of both Prince Philip and Donald Trump is irresistibly charming to their admirers and embarrassing to their detractors, but identically revelatory to the world at large. Their racism is so against the grain of recently manufactured liberal “tolerance” that they don’t know where to hide it.

Think of the word, the concept, the very idea, of “tolerance” of which liberal democracy is so proud. What does it mean to be “tolerant?”

From John Locke’s A Letter Concerning Toleration (1689) to Voltaire’s Treatise on Tolerance (1763), two towering European philosophers have argued against religious or political bigotry and fanaticism. But today liberal “tolerance” amounts to a fanatical conviction about one’s own beliefs thinly disguised under the veneer of “tolerating”, meaning putting up with, other people’s misguided beliefs and practices.

Until such time that we reach a point when we do not “tolerate” each other but in fact see the truth and the beauty of the world from each other’s perspective, Prince Philip, bless his splendidly racist soul, exposes the hypocrisy of liberal “tolerance”. I love him for it. He screams out loud what other racists like him have learned how to conceal and camouflage in what they think and project as civilised demeanour – as they load their fighter jets with bombs to drop on brown and black people to send them “back to the Stone Age”.

There is a beautiful barbarity of truth to Prince Philip’s racism, exposing the ugly hypocrisy at the very foundation of “Western civilisation”.