North Korea said on Wednesday it is “carefully examining” a plan to attack the US Pacific territory of Guam with missiles, just hours after US President Donald Trump told North Korea that any threat to the United States would meet “fire and fury”.

A spokesman for the Korean People’s Army, in a statement carried by North Korea’s state-run KCNA news agency, said the attack plan will be “put into practice in a multi-current and consecutive way any moment” once leader Kim Jong-un makes a decision.

In another statement, quoting a different military spokesman, North Korea also said it could carry out a pre-emptive operation if the US showed signs of provocation.

Trump threatened North Korea “with fire and fury like the world has never seen” on Tuesday after reports suggested the communist country has mastered one of the final hurdles to the ability to attack the US with a nuclear missile.

The nuclear advances were detailed in an official Japanese assessment and a Washington Post story that cited US intelligence officials and a confidential Defense Intelligence Agency report. The US now puts the North Korean arsenal at up to 60 nuclear weapons, more than double most assessments by independent experts, according to the Post’s reporting.

“North Korea had best not make any more threats to the United States,” said a stern-looking Trump, seated with his arms crossed and with his wife beside him, at his golf course in Bedminster, New Jersey. “They will be met with fire and fury like the world has never seen.”

The remarks appeared scripted, with Trump glancing at a paper in front of him. They evoked President Harry Truman’s announcement of the US atomic bomb dropped on Hiroshima, Japan, in 1945, in which he warned of “a rain of ruin from the air, the like of which has never been seen on this earth”.

Al Jazeera’s Heidi Zhou-Castro, reporting from Washington, DC, said that the missile that North Korea is threatening to hit Guam with was tested in May and South Korea’s intelligence analysts concluded it was capable of flying up to 5,000 kilometres, “which does make Guam well within striking range”.

Guam hosts strategic US military installations – including both a naval and an air force base – and is more than 3,400km from North Korea. Its population is around 160,000 – but only about 6,000 US troops are currently stationed there.

Robert Kelly, professor of political science at Pusan National University, told Al Jazeera that both North Korea and Trump were almost certainly exaggerating in their respective rhetoric, as a conflict would be disastrous – and that Trump was likely stepping up the rhetoric to pressure China into taking action to curb North Korea’s behaviour.

“If the North Koreans were to strike Guam and kill a lot of Americans it would lead to a war which would destroy North Korea, so my guess is this is bluffing on both sides,” he said.

“But it certainly doesn’t help because it raises the possibility of miscalculation and misperception,” added Kelly.

The Trump administration considers North Korea to be America’s greatest national security threat and tensions have steadily escalated this year.

Pyongyang had threatened the US in response to the UN Security Council’s adoption this weekend of new, tougher sanctions spearheaded by Washington. The sanctions followed groundbreaking long-range missile tests last month that showed North Korea could potentially reach the continental US with its missiles. The newly revealed US intelligence assessment indicates those missiles can carry nuclear warheads.

Denouncing the UN sanctions through state media, North Korea warned: “We will make the US pay by a thousand-fold for all the heinous crimes it commits against the state and people of this country.”

For North Korea, having a nuclear-tipped missile that could hit the US would be the ultimate guarantee against invasion by its superpower adversary.

In an annual report, Japan’s defence ministry on Tuesday concluded that “it is possible that North Korea has achieved the miniaturisation of nuclear weapons and has developed nuclear warheads.” Japan, a key US ally, is a potential, front-line target of North Korean aggression.

Last month’s tests of intercontinental ballistic missiles highlighted the growing threat. While those missiles landed at sea near Japan, both were fired at highly lofted angles. Analysts said the weapons could reach Alaska, Los Angeles or Chicago if fired at a normal, flattened trajectory.

Not all technical hurdles have been overcome with the missiles, however. North Korea is still believed to lack expertise to allow a missile to re-enter the Earth’s atmosphere without burning up. Another work-in-progress: the ability to attack targets with accuracy.

Al Jazeera’s Patty Culhane, reporting from Washington, DC, said the Trump administration’s responses to the threat posed by North Korea have been inconsistent.

“We’ve seen the US secretary of state say that he’s willing to negotiate with North Korea. The US ambassador to the United Nations said the time for talk is over. The CIA director hinted that the US was looking for regime change in North Korea,” she said.

“On the campaign trail, [Trump] said that the fact that he is unpredictable was an asset. We’re about to find out in a very high stakes test if he’s right.”

Punishing measures are in ‘violent violation’ of North’s sovereignty, Pyongyang says, as it rejects offers of talks. 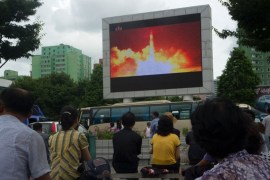 Security Council due to vote on Saturday on a US draft resolution aiming to deprive Pyongyang of $1bn in export revenue.