Read our story on the Iranian election, which is being updated with all of the latest information

Iran is holding its twelfth presidential elections. Political analysts and Middle East specialists are watching these elections very closely, but what impact will they have?

Why do Iran’s presidential elections matter?

Iran is a powerful country in the Middle East, and its stability and foreign policy affect its neighbours and have knock-on effects outside the region as well. Iran is involved in the Syria conflict, is closely tied to Hezbollah in Lebanon, and has interests in countries with sizable Shia populations, such as Iraq and Yemen.

And let’s not forget Iran’s nuclear programme, which earned it pariah status internationally and crippling economic sanctions that have squeezed its economy.

Incumbent President Hassan Rouhani was able to conclude the successful P5 1 negotiations in 2015, and according to this “nuclear deal” Iran would halt work on its nuclear programme in return for a lifting of the sanctions and the unfreezing of billions of dollars in Iranian funds.

ANALYSIS: How will May 19 election shape Iran’s foreign policy?

Who are the main candidates?

Rouhani was involved in secret negotiations with the US over the Iran Contra deal in the 1980s and in the P5 1 negotiations, which were successfully concluded during his presidency.

Raisi has also been named custodian of Astan Quds Razavi, which is in charge of the Imam Reza shrine, the holiest shrine in Iran that controls the largest assets of any charity in the Muslim world.

Up until Monday, there were two other strong candidates in the race, Reformist First Vice President Eshaq Jahangiri and Principlist mayor of Tehran Mohammed Bagher Ghalibaf.

They had strong showings during televised debates and on the campaign trail, but were seen as placeholder candidates and both had withdrawn by Tuesday evening.

Jahangiri announced his full backing for Rouhani and asked all those who supported him to vote for him as well, while Ghalibaf threw his support behind Raisi and asked his supporters to do the same. 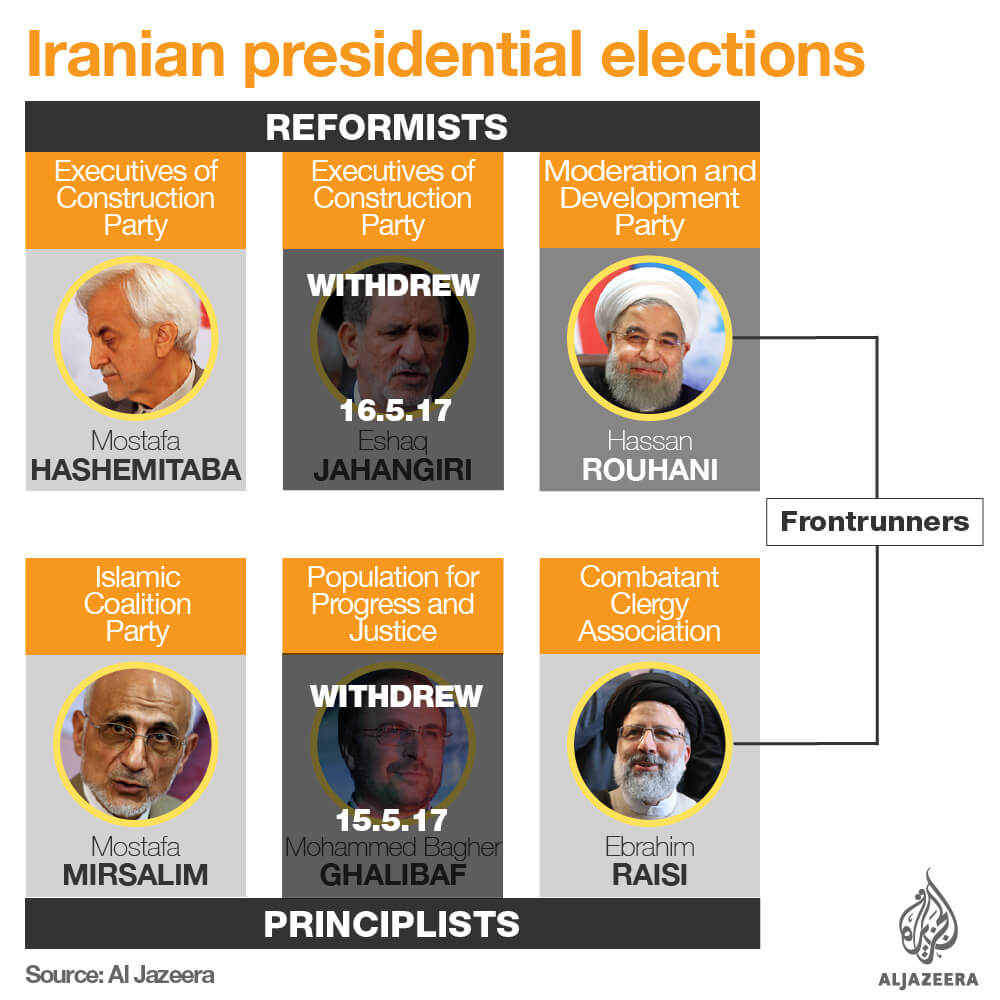 What is the difference between a Reformist and a Principlist?

There are two main blocs in the Iranian political spectrum, Reformist and Principlist. Both, however, have their primary loyalty to the Islamic Revolution and the established order of Iran.

Reformists are the more liberal side, as they believe in opening Iran up to the world, liberalisng economic policy, encouraging foreign investment in the country, and focusing on the rights of Iranian citizens. By extension, this side of the political spectrum is very much pro the nuclear deal and the improvements it can bring to Iran and its people.

Principlists are the conservatives of Iranian politics.They are not in favour of liberalisation or opening up to the outside world, which puts them on the opposite side with regards to the nuclear deal as well, which they think was not the right instrument for Iran to sign on to, but have reluctantly agreed to support it.

During the campaigning leading up to the elections, they [conservatives] mentioned the nuclear deal often as an opening to attack Rouhani for not having delivered any major tangible improvement in the lives of everyday Iranians since the end of 2015.

Can a woman be president?

There has been a lot of dispute in Iran about whether or not a woman can become president. The constitution of Iran uses the word “rejal” [men in persian] to refer to the acceptable candidates, stating in Article 115 that a president is to be elected from among “religious and political rejal”.

The Guardian Council, which is an appointed body, is responsible for vetting all nominees for the presidential election and allowing only those that it sees as acceptable to run. They have so far held to the opinion that the word “rejal” in the constitution refers only to men.

This year, 73-year old Azam Taleghani registered to run for the presidency for the third time (first time was in 1997, second time in 2009). Her candidacy has been rejected by the Guardian Council every time but Taleghani, who is the Secretary General of the Islamic Revolution Women’s Society, has vowed to keep up her fight to demand that the Guardian Council revise their strict interpretation of the constitution, arguing that “rejal” can also be interpreted as “personalities” and does not have to mean “men”

What is the state of Iran’s economy?

Iran’s economy has taken a beating under the sanctions regime, with inflation running rampant, unemployment in the double digits, and no hope on the horizon for a number of years. With the signing of the nuclear deal, billions of dollars of Iranian funds were released and oil sales began to prop up the economy.

So far the improvements have been felt mostly in terms of a reduction of inflation (from 40 percent to 7.5 percent) and pulling the growth rate out of the negative up to 7 percent.

One side of the economy where there hasn’t been an improvement so far is unemployment, as Iran still hasn’t been able to attract the international investment that would mean job creation.

International investors have been a bit skittish with Iran so far, discouraged by the difficulty of doing business in a country where the economy is largely monopolised by enormous government and quasi-governmental businesses and bodies, including the religious endowments and projects run by the Islamic Revolutionary Guard Corps.

In order to open Iran up to investments, the new president would have to continue the effort begun by Rouhani and his administration. This effort would include reducing red tape that strangles new company registrations, and loosening the hold that the big players have on the Iranian economy so that new companies can enter the market and compete.

Can women vote in the elections?

Yes of course. Of Iran’s estimated 81.8 million population, 49 percent are women. Iranian women won the right to vote in 1963 and were allowed to stand for public office. In November 2016, about 6 percent of Iranian parliament members were women.

How many people vote?

About 55 million Iranians are eligible to vote in the elections, and they will be able to do that in any one of 63,000 polling stations, which will be monitored by 1.5 million staffers, 70,00 monitors and a scalable force of 350,000 security personnel. Candidates can assign a monitor of their choice to observe proceeding at each station.

A big turnout on Friday, estimated at more than 40 million out of 56 million registered voters, led to the vote being extended by several hours to deal with long queues.

What time are the elections results?

The minister of the interior has announced that the results of the election will not be announced in stages this year, rather they would be made in one final announcement at the end of counting. He does not predict a second round of runoff voting this year, given that the two leading candidates have been supported by 11th hour alliances that have strengthened their campaigns and reduced the chances of vote splitting.

Will the elections affect Iran-US relations?

This is a big question, but it’s not actually clear that the victory of one candidate or another would change the course of this relationship.

US President Donald Trump has stated repeatedly that he does not agree with the terms of the nuclear deal and that he thinks it was a very bad agreement for the US to sign.

In this, Trump sounds a lot like the Principlist bloc in Iran, who also feel that the nuclear deal was a bad idea for Iran, although they did state during the presidential debates that they would respect it as a national accord.

If either Iranian bloc respects and maintains the nuclear deal, there should be no major irritants to the relationship coming from the Iranian side. Nor will there be any major shift in Iranian regional policy, which is largely guided by the Supreme Leader, rather they will continue as they are today.

All of the above means that any major shift in relations would come from the US side. In a surprise move on Wednesday, Trump passed up a chance to derail the deal, a move analysts said reflected business interests at home and diplomatic relations abroad.

With regards to regional reach and politics, the US is seen to be aligning itself closely with Saudi Arabia these days, which has had and will continue to have an effect on Iran as both countries talk about containing Iran’s reach in the region.

Could the new president turn his back on the nuclear deal?

Given the statements made by the Principlist bloc candidates during the debates, this is not likely to happen unilaterally. If the US were to make moves to back out of the nuclear deal, then Iran may well reciprocate, but that remains to be seen. There is one step before “turning their back” on the deal, namely renegotiation, which either Iran or the US could call for.

Where do the candidates stand in relation to Saudi Arabia and Israel?

No Iranian president will stray from Iranian policy that opposes Israel‘s occupation of Palestine. Last February, Iran hosted the International Conference on the Palestinian Intifada, an event it has been hosting every four years since the 1990s.

During the conference the Supreme Leader called for a new uprising against Israel, and Rouhani expressed Iran’s resolve to continue supporting the Palestinian cause in spite of the “heavy price” paid by the Islamic Republic.

With regards to Saudi Arabia, Rouhani outlined in January the reasons that stood in the way of a more cordial relationship between Iran and the Kingdom, namely the war Saudi Arabia is pursuing in Yemen, and Saudi interference in countries such as Bahrain.

Another reason for tensions between the two countries is Saudi support for the People’s Mujahedin of Iran (Mujahedin-e khalq, or MEK) who are calling for an overthrow of the current government in Iran.

How will the election’s results affect the Middle East?

It’s not likely that the election’s results will change much in terms of Iran’s regional behavior, as its involvement in a number of relationships and conflicts is set.

The Supreme Leader, Ayatollah Khamenei, not the president, has final say in all matters and is commander in chief of the armed forces. This means that Iran will remain on the regional path it is on today, focused on its involvement in Syria and the sectarian tension in the region.

A historical antagonism to anything that seems like the US dictating to Iran also adds to Iranians’ feeling that the government should act in the best interest of Iran and its regional allies. 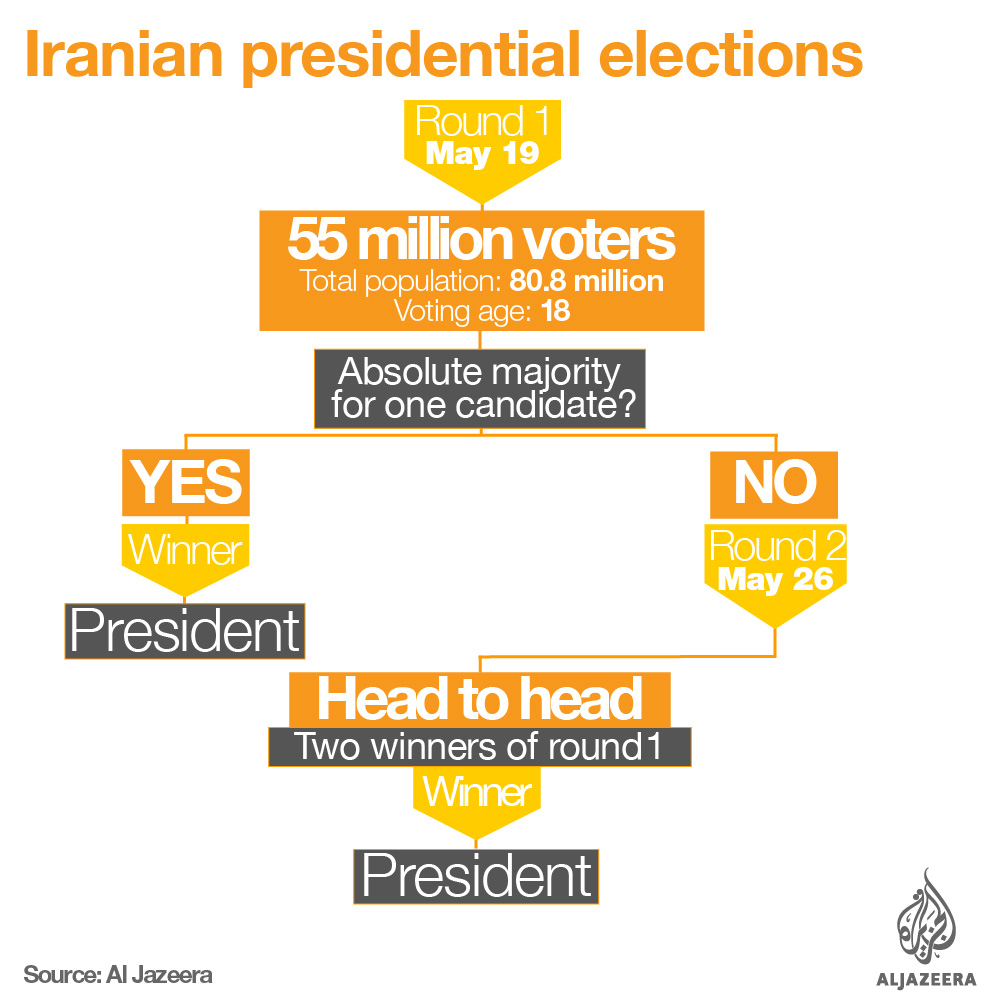