It came as a shock to all of us. A man who seemed invincible could not defeat his own mortality. He was known to be suffering from poor health, but it was no less of a blow. And for many Muslim communities around the world, his death was a particularly scathing event.

Muhammad Ali died on June 3 last year, only a few days before the month of Ramadan began, a holy month within the Islamic calendar observed through fasting, prayer and charity. Ali chose to live his life according to Islam, and he left this world as the holiest month of his religion began. His funeral was a global event full of traditional Islamic rites, so much so that his spiritual adviser and imam, Zaid Shakur was reported to have said at the time that “Muhammad planned all this … and he planned for it to be a teaching moment”.

It was heart-warming to see the outpouring of love, condolence and celebration of the man who “floated like a butterfly and stung like a bee”. The then US President Barack Obama, who kept a pair of Ali’s boxing gloves in his private study remarked that the boxing champion “shook up the world and the world is better for it”.

Actor and rapper Will Smith who played Ali in the 2001 biopic of the boxer said, “He [Ali] was the greatest of all time. When you think about the legacy of Muhammad Ali, what he did in the ring is not what we think about. I got to wear Muhammad Ali’s greatness”.

Ali was not just a boxer or an internationalist, he was also a principled human being. His stance against being drafted for the Vietnam War was arguably a great blight on the conscience of the American polity. But this may still be a simplistic reading of his legacy, as he was by no means free from the complexities of being in the limelight. His personal struggles, such as his extramarital affairs are well known, something he himself admitted to. Beyond the legend, Ali was real. And he was also a Muslim … a black Muslim.

visibility as a poignant, proud “black” Muslim figure, who is proud of his African heritage, offered a positive example to many Black Muslims who can at times find it difficult to assume their intersectional identities.”]

Ali lived his life as an exemplary Muslim and his example had been a matter of pride for the Muslim community as a whole. He was, and still is, the insignia of Islam “done right”. He brought together all the makings of the racial equality espoused by Prophet Muhammad in his example as he transitioned from a black separatist group, the Nation of Islam, to mainstream Sunni Islam – following the footsteps of his once spiritual forbearer, Malcolm X.

Ali’s death was especially meaningful for black Muslims living outside Africa, and especially in the West. His visibility as a poignant, proud “black” Muslim figure, who is proud of his African heritage, offered a positive example to many black Muslims who can, at times, find it difficult to assume their intersectional identities.

Anti-blackness is a reality in some parts of the Muslim community, and this is a struggle which at times can render us, black Muslims, apart from other black communities. And this ongoing struggle was one of the reasons why many black Muslims used Ali’s passing as an opportunity to not only celebrate and promote the importance of racial equality, but also to criticise the lack of racial equity in the form of anti-blackness, colourism and otherness.

A week after Ali’s death, in a piece written by journalist Khalil Charles, provocatively entitled “Asian and Arabs are no friends of Muhammad Ali“, criticism was meted out against those consciously or otherwise “use” great black Muslim figures like Ali for the purpose of shutting down questions around racism and colourism.

He wrote, “It’s one thing to parade Muhammad and Malcolm as symbols of strength when Muslims today need to project courage in the face of oppression, but it is another thing to use these great figures to hide real weakness in the community and the lack of real support for the few Muslims who are vocal and are prepared to stand up for justice and to speak out against oppression”.

After Ali’s death, several other writers also asked, “Why do we have the toxic notion that Muhammad Ali transcended race?” Why is everyone so eager to brush away his “blackness”, whether that be as an American or as a Muslim? The fact that he was a black man whose entire career and demeanour were rooted in black politics and black self-love should not be blighted from his legacy. It is okay to admit that he was black. It does not take anything away from us or him to admit and honour this fact.

The idea held by some Afrocentrist scholars that Islam is an anti-black religion isn’t true. Racial equality is one of the cornerstones of Islam as shown in the Koran and the example of the Prophet Muhammad, but it is true that anti-blackness is prevalent in the Muslim community. And in matters such as these, it is not good enough to sweep dirt under the carpet and call the floor clean.

Some people say that authors and commentators who tried to draw attention to anti-blackness in the Muslim community after Ali’s death were causing unnecessary tension and division.

OPINION: Muhammad Ali – Rumble in heaven as you did on Earth

This year, prolific spiritual leader Hamza Yusuf came under fire at an Islamic conference, for allegedly trivialising the black struggle in America when asked about Muslim alliance with the Black Lives Matter movement. He has apologised and provided clarification on the issue, but shutting down conversation isn’t going to make the matter go away. Ignoring this problem only produces a feeling of isolation and marginalisation at a time when the Muslim community is arguably facing a negative cloud due to external political issues.

Ali’s death started a new conversation about anti-blackness in the Muslim community and since his death, there has been several campaigns – both online and offline – to raise awareness about this issue.

In the year following Ali’s death, an artist, Bobby Rogers, used the #beingblackandmuslim hashtag on Twitter to bring the struggle of Black Muslims, who fight racism and Islamophobia simultaneously, under the spotlight. Nonblack Muslim community leaders, such as Omar Suleiman and Suhaib Webb started to align themselves with the Black Lives Matter movement in the US. International award-winning poet and speaker, Boona Mohammed started a social media campaign dubbed Black Muslim History and produced a series of discussions with African historian Shaykh Abdullah Hakim Quick to demonstrate the centrality of Africa within global Islamic history and other subtexts to end the “otherness” normally associated with black Muslims.

Here in the UK, a wide-scale debate occurred after the BBC series Muslims like us where Nigerian comedian Nabil Obenichie was seemingly “silenced” by an older, white British Muslim woman when he spoke up on race and the distinct black British Muslim experience.

These are all positive steps, and we should continue to honour Ali’s legacy by supporting the fight against the ongoing discrimination and structural racism experienced by black Muslims all around the world. 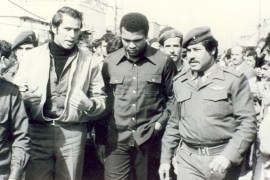 The Greatest was a black man who supported Palestinians

Muhammad Ali supported the Palestinian struggle against Israeli colonialism, including the annexation of Jerusalem.