France heads to the polls in two rounds of voting on April 23 and May 7 to elect a new president who will inherit a country looking for change, and a population that is increasingly intolerant of politicians who fail to deliver on their promises.

Like his predecessor, Nicolas Sarkozy, Francois Hollande’s presidency lasted just one term. The incumbent opted not to stand for re-election amid low approval ratings.

A French president can serve for a maximum of two five-year terms.

Eleven candidates will compete in the first round of the election.

It is widely expected that none of them will win an outright majority of 50 percent in the first round, meaning a runoff vote is almost certain.

The two top contenders will go through to a decisive second round on May 7.

Campaigning kicked off officially on April 10 and ends on the night of April 21.

The final result will be announced at 8pm on April 23.

Opinion polls in France show that only around 65 percent of the electorate are planning to vote in the first round, and up to 50 percent of 47 million voters remain undecided on who to vote.

The 30 percent who are planning to abstain would help set a record low turnout.

It is increasingly difficult to predict the outcome of the election. The race is tight and five of the 11 candidates have been constantly polling at more than 10 percent of the vote.

According to the latest polls, none of the traditional centre-right and centre-left parties, which have ruled France since the 1950s, are projected to make it to the May 7 runoff.

READ MORE: The populist drift of the French election campaign

This election comes within a year of the unexpected Brexit vote in the UK and the election of populist Donald Trump as president of the United States last November.

In France, the possibilities are no less dramatic with the steady advance of the far-right National Front’s Marine Le Pen.

According to pollsters, 48-year-old Le Pen, an anti-EU candidate, is expected to reach the second round but ultimately lose to Emmanuel Macron, 39.

A Le Pen victory would send shockwaves every bit as seismic as events in the UK and US, likely spelling the end of the European Union in its current form.

Her victory would also domestically test the country’s already strained relations with its sizeable Muslim community.

Macron, Le Pen’s main challenger and favourite to win, has campaigned on a pro-EU, pro-status quo, centrist outlook, hoping to secure support from those weary of the disruption an unknown quantity, such as Le Pen, may bring.

But Le Pen is not alone in promising major change.

Along with the conservative Francois Fillon, who is 63, the 65-year-old leftist Jean-Luc Melenchon favours a rapprochement with a Russian government increasingly at odds with the Western order.

Like Le Pen, Melenchon is a eurosceptic who has promised a referendum on the country’s continued membership of the bloc.

While pro-EU, Benoit Hamon, the 49-year-old Socialist Party candidate, is no less radical. He has promised the eventual introduction of a basic income for all French citizens.

The other six candidates include a leftist economics teacher, an anti-American nationalist convinced that the EU is a CIA-backed plot and a conspiracy theorist who has before called for a “thermonuclear corridor” between Earth and Mars.

None of them is expected to win more than five percent of the vote.

Whoever becomes president will be tasked with fixing a number of issues, the biggest of which will be to recover the country’s stagnated economy.

OPINION: Elections in France – It’s all about security

The problem of youth unemployment, tensions involving France’s Muslim and ethnic minority populations and the threat of the Islamic State of Iraq and the Levant (ISIL, known as ISIS) group, will also top the agenda. 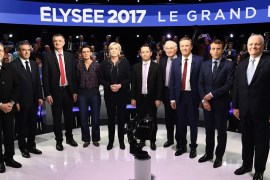