If exile is characterised by an endless feeling of estrangement, seeking political asylum is a perpetual state of anxiety.

When I started the process of claiming asylum in the United States, an apparently safe and democratic country, I assumed it would help seal off the trauma of my life in Eritrea, the country I had fled. I hoped it would open a new chapter.

But as I embarked on the journey of asylum, I realised that there is a comprehensive dehumanisation process at the heart of it all. The deeper you descend into the legal process of escape, the more you are required to prove who you are, prove the horrors of your experience, while all the time revisiting the very things that forced you to flee.

As part of my claim, I had to request testimonies, collect evidence, and continually delve back into the most traumatic moments of my past. I had to re-examine my life in intense detail, checking with friends and former colleagues the exactitude of my own memories.

“So when, exactly, were we taken to the labour camp?”

“Do you remember the exact month the University of Asmara was closed?”

“Do you remember when they rounded us up in the … ?”

All this, only to remain in a limbo state. It took me more than two years and four months to be interviewed by US Citizenship and Immigration Services. For the duration of that time, I was designated as a “pending asylee”. My rights to receive any state help or services, from either my home or host country, were on hold.

READ MORE: How does it feel to be a refugee?

I had a temporary work permit, but as a pending asylee, I did not fit into any clear bureaucratic category, which meant I couldn’t apply for a permanent job, or officially pursue my studies. I was told applications are normally processed within a month when I submitted mine in San Francisco. Two years later, I was still waiting.

After a prolonged period with no news, I went to the asylum office in San Francisco to inquire about my case.

“Speak English?” asked a woman on the other side of the glass. I nodded, yes. Then, I started to explain the dire situation I was in. I told her how I had been waiting for months. I told her how this legal limbo was affecting me.

Neither am I present here, nor in my home. No matter how hard I try, I am forever an outsider who speaks with a heavy accent.

“Go work then. We are here to help you.”

I left the office, to return to my torment where insecurity, fear and uncertainty loomed. I was sure a bleak future awaited me.

In November 2015, I was finally elevated to “asylee” status. My first act as a legal US resident was to go to a bank to open a savings account. But after checking my immigration status and tapping on his keyboard for a while, the bank manager turned and told me: “I am sorry, but you can’t open an account with us as your immigration status does not fit into our categories. You either have to be a permanent resident or a citizen. We do not have a category called ‘asylee’ or ‘refugee’.”

In that moment, it became clear to me: Securing asylum was only the beginning of a life-long journey of a neither-nor state. Meanwhile, my idea of home was becoming increasingly romanticised and I became confused – perhaps I could just return?

READ MORE: An Afghan refugee in Europe: ‘All I can do is pray’

But home is no longer there. It is a surreal dream, a pastiche of images that cascade in my mind without reason. Neither am I present here, nor in my home. No matter how hard I try, I am forever an outsider who speaks with a heavy accent.

But maybe these places are not so different. I fled from a police state where freedom of movement is nearly nonexistent, where official papers and endless checkpoints restrict your travel. I used to think that securing political asylum would rescue me from this world for good.

But even once my place in the US was secure, it seemed I was once again frozen in place. My first attempt to journey abroad – for an international film festival and forum on human rights that was held in Geneva, Switzerland in March 2016 – failed because I couldn’t get my travel documents in time. I had to participate via Skype.

A similar thing happened when I tried to travel to Norway in March 2017 to participate in a congress hosted by my organisation, PEN Eritrea. Because of travel document delays, we were forced to postpone the congress. Meanwhile, I also had to cancel my plans to travel to the UK in June 2017. It was not only a matter of securing a valid travel document, but also dealing with the demanding entry visa applications, where most consular offices have their cautionary notices on their websites, “You are advised to apply at least two months before your scheduled travel.”

In July 2017, five years after arriving in the US, I was allowed to travel outside of US borders for the first time to attend PEN Eritrea’s congress in Norway. Expecting the inevitable hassles and delays by the immigration office at the airport, I arrived at check-in hours before the departure time.

I could clearly read the confusion on the immigration officer’s face as he leafed through the pages of my travel document. After finally making sure that I had secured a Schengen visa, he asked: “Which country’s passport is this?”

“It’s a travel document for a stateless,” I replied.

He grabbed his phone and started to make calls. Each time he read the title of the document, my country of origin, my travel destination and the office that had issued the document.

In between the calls he would turn to me and politely say: “I just want to make sure I’m not missing anything. I have not seen this document before and don’t want to make mistakes.”

After around 30 minutes, I was cleared. I was on my way.

“Where are you from?” the lady over the counter asks me in a bar.

I take a deep breath before answering. “I’m not from here, I’m not from there; I don’t belong anywhere.”

Abraham T Zere is a US-based Eritrean writer and journalist who is serving as the executive director of PEN Eritrea in exile. Among others, his articles – that mainly deal with Eritrea’s gross human rights abuses and lack of freedom of expression – have appeared in The Guardian, The Independent and the Index on Censorship Magazine. 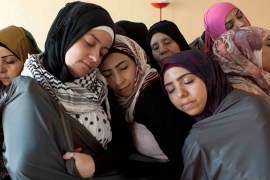 How does it feel to be a refugee?

On exploring the refugee experience through theatre.

Can Eritrea’s Afwerki hold on to power after the Tigray war?

Can Eritrea’s government survive the coronavirus?