Poverty, hunger, suffering. These terms seem inadequate to describe what I witnessed in the Lake Chad Basin, the West African region that is host to the one of the world’s worst – and certainly its most neglected – humanitarian crisis since 1945.

The crisis in the West African region, which includes parts of Nigeria, Chad, Niger, and Cameroon, has left approximately 10.7 million people in need of immediate humanitarian assistance.

The human face of this crisis is devastating. When I visited the region as part of a mission with the World Food Programme in May this year, I saw desperate hunger, displacement, and shocking levels of violence and insecurity facing civilians, especially women and girls. Civilians live with the daily threat of rape, kidnappings, killings and terrorist attacks. Over 2.4 million people have been displaced by the crisis, but there are simply aren’t the resources to meet the most basic needs of these people in the refugee or displaced peoples camps or urban centres where they end up. With little or nothing left to trade for vital resources like food, sexual exploitation (sex-for-food as it is known) has become the norm, even within the camps.

A report released this week by the UN Secretary-General affirms all I witnessed on the ground in the Lake Chad Basin. It underscores the overwhelming scale of the crisis, and the need for urgent and immediate humanitarian responses. But it doesn’t quite go as far as thinking about a long-term solution. In my view, the short-term and long-term responses simply cannot be separated, without being detrimental to both.

In order to tackle this crisis with any kind of sustainability – even in the short-run – there needs to be a thorough understanding of what caused it to spiral in the first place. While the current crisis was triggered by violence linked to armed groups such as Boko Haram, discussions I had with people in the region, and expert consultations convened by my organisation on the issue, agree on some root causes.

Everyone I met agreed that the situation has deep roots in long-standing developmental challenges, namely widespread inequality and decades of political marginalisation of the communities in the region. The lack of investment from national governments in basic services like health and education in the region meant that these communities felt alienated and left behind. In a sense, this is no different from the frustrations felt by certain communities in the UK pre-Brexit, and in the US pre-Trump, pushing them towards extreme alternatives. In the Lake Chad Basin, over time, this has instilled a deep sense of exclusion and lack of trust between communities and the government. Against this backdrop, the region also faces significant environmental stress.

The only effective solutions will be ones that address the underlying causes of the crisis, that are durable and sensitive to the environmental changes brought about by a warming world.

Frequent prolonged droughts in the region mean there is less water and arable land to go around. In a predominantly farming and pastoral society dependent on the mighty Lake Chad for survival, less water means not just fewer jobs but also extreme poverty. I heard many accounts of exacerbated tensions between pastoralists, farmers and fishers. The risk of hunger and unemployment makes young people more vulnerable to recruitment by non-state armed groups such as Boko Haram and illicit employment, and also feeds into armed conflict and contributes to widespread internal as well as cross-border displacement.

To be clear: climate change does not create terrorists, nor does it turn law-abiding citizens into criminals. But a warming world acts as a threat multiplier, worsening existing risks and making it harder to work on solutions.

Social stability demands food and water. As these resources become increasingly scarce, I could see communities become increasingly desperate. What are young people to do when there are no jobs available? Some choose to join a militant group like Boko Haram, which can offer consistent salary and calories when they recruit in farming and fishing villages. Farmers I spoke with explained how the wheat harvest is now a particularly dangerous time for them as Boko Haram insurgents come in to loot the harvest in order to feed their soldiers. Boko Haram also provide access to services such as education, which in the absence of functioning schools and trained teachers, brings eager parents and children into their influence. Not everyone joins armed groups, though the alternatives are still not positive. Others may take up petty crime. Or more violent crime. Women and girls are increasingly pushed into prostitution just to survive.

These ongoing emergencies – the hunger, the violence, the breakdown of law and order – aren’t a tragic coincidence. Rather, there is a complex interplay between many factors that create the conditions for such social collapse and suffering. In considering these factors, climate change cannot be ignored, for it exacerbates the worst catalysts of the crisis and fuels the fragility that has inflamed the region.

As the UN strives to raise funds and coordinate government responses to the crisis, we must recognise that the problems will only be solved if we understand the effect climate change is having on these social stressors. The only effective solutions will be ones that address the underlying causes of the crisis, that are durable and sensitive to the environmental changes brought about by a warming world.

10.7 million people in the Lake Chad Basin urgently need urgent support today. But the emergency relief we provide will be nothing more than a temporary respite if we do not address the vicious accelerant of fragility that is climate change. Just as climate change is part of the problem, so too can it be part of the solution.

Alexander Carius is cofounder and managing director of adelphi. 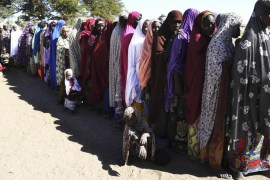 As the humanitarian scale-up in the region continues, governments and donors are urged to do their part. 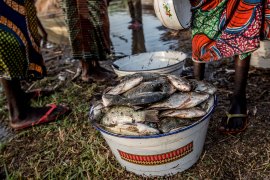 Refugees displaced by Boko Haram take on new life of fishing, but fear all will be lost as Lake Chad slowly disappears.