It was a moonless night in the countryside outside Granada, Spain in 1936. A coded execution order came down: “Give him coffee, lots of coffee!”

Antonio Benavides, part of an irregular volunteer firing squad, obliged. “I gave that fat-head a shot in the head,” he reportedly boasted later.

This is one account of the death of the famed Spanish poet and playwright, Federico Garcia Lorca. There are many others. After all these years, the circumstances surrounding Lorca’s death and the whereabouts of his remains continue to be one of the great mysteries of Spain’s recent history. But after 81 long years can – will – the truth finally emerge?

In response to a request by the Spanish Association for the Recuperation of Historical Memory (ARHM), an Argentinian judge, Maria Servini de Cubria, agreed to investigate the death of Lorca in August 2016.

Lorca is the most famous face of a Spanish phenomenon little known in the rest of Europe: “desaparecidos” (disappeared). In 2014, an investigation by the United Nations Working Group for Human Rights revealed that between the Spanish Civil War (1936–1939) and the end of Franco‘s dictatorship (1939–1975), an estimated 114,226 Spaniards “disappeared”.

In a recent ranking of countries with the greatest number of disappeared, Franco’s Spain came second only to Cambodia under Pol Pot.

“[The Argentinian court’s decision to investigate] is important for Spain, for the Spanish victims, because they have found a court that is listening to them,” Lydia Vicente, executive director of Rights International Spain, told me. “Judge Servini de Cubria is applying international law and norms, which are disregarded by Spanish courts.”

The same Argentinian court has long been trying to help families of the Franco regime’s victims to get closure. In 2013, hundreds of Spaniards turned to Cubria’s court for help in uncovering crimes committed during the war and the subsequent dictatorship by using an international human rights law.

Argentina is pinching holes in the dark closed ball of Spanish impunity.

In 2014, Judge Cubria ordered some of General Franco’s former ministers to face justice as part of the investigation. She issued arrest and extradition warrants invoking “universal jurisdiction”, a legal doctrine that authorises judges to try serious rights abuses committed in other countries. Spanish courts denied the warrants, but activists supporting the victims have nevertheless defined the move as “historic”.

Last year, thanks to the Argentinian court, the first-ever court order to exhume the bodies of Spanish civil war victims was issued and a mass grave in a cemetery outside Madrid containing 22 bodies was opened.

And last month, in an emotional and widely publicised event, Ascension Medienta, a 91-year-old woman who had spent her life and savings searching for her father´s body, was finally able to bury him.“What joy, what joy! Now I can sleep peacefully,” she exclaimed after receiving the news from her lawyer.

So why did the Spanish courts fail to prosecute these historic crimes, including Lorca’s death, after so many years? Because, in 1977, Spain passed an “Amnesty Law,” ostensibly to protect its fledgling “democracy” after four decades of military dictatorship. This law prohibited individuals from being tried for crimes committed between 1936 and 1975.

Of course, laws can be changed, if there is will. But the 39-year silence enforced by the military dictatorship eventually morphed into a collective “el pacto del olvido” (pact of forgetting) in Spain. Amnesty turned in to amnesia. In international law, Spain has come to be known as an example of the “Oblivion model”: a memory law model based on the denial of any investigation, prosecution or reparation related to crimes committed during civil wars or other crucial historical events.

The Argentinian court’s investigation into Lorca’s death is only the latest effort from outside to force Spain to act. In 2014, Pablo de Greiff, UN Special Rapporteur on the promotion of truth, justice and reparation, urged Mariano Rajoy’s Conservative government to repeal the amnesty law and request courts to investigate crimes of Francoism. His call was left unanswered.

“The UN said it clearly. Our democracy is robust and stable enough to do this, to heal our wounds. Because we are a democracy, we owe it to the victims, to all of us,” says Vicente.

In 1936, angered by the global interest in the death of Lorca, Franco dismissed any involvement in his assassination. “The writer died while mixing with rebels,” he declared. Franco’s assumption was that bad “rebels” were responsible for the death of the renowned poet. But the “rebels” he was referring to were, in fact, Republicans: supporters of the democratically elected government Franco’s fascist forces finally succeeded in overthrowing.

And far from being innocent, documents from a 1960’s inquiry into Lorca’s death, released in 2015, showed that Franco’s administration had actually given official orders for his assassination. These documents are now with Servini de Cubria´s court in Argentina, according to Maximo Castex, one of the lawyers working on the case.

As Ian Gibson, the prime biographer of Lorca who has seen the documents, recently wrote: “[These documents] demonstrate that it was not a street killing. He was taken out … to be murdered.”

These documents are the first ever evidence of Franco-era officials’ involvement in Lorca’s death. And by default, they prove the complicity of the regime in thousands of other disappearances. The importance of these documents and the investigation that is now taking place in Argentina is hard to overestimate.

Enforced disappearance is a technique of terror, utilised by oppressive regimes to silence all opposition.

And enforced disappearance is one of the most serious crimes that exist in criminal law: It starts with illegal detention accompanied by torture, leads to murder and concludes with the hiding of the body.

Spain continues to delay or refuse requests by Argentine courts for documentation and extradition regarding forced disappearances. UN bodies have insisted that Spain must cooperate with Argentinian courts, pointing out that it must either extradite or prosecute – a basic principle under customary international humanitarian law. Yet, the government of Spain has done neither.

And now, with the change of government in Argentina from leftist Christina Fernandez Kirschner to centre-right Mauricio Macri, Argentinian courts – which once forcefully prosecuted and imprisoned Argentina´s own war criminals – have started to go quiet.

A request to extradite Rodolfo Martin Villa, former Minister of the Interior under Franco, for homicide and crimes against humanity committed during the dictatorship – crimes which took place within the framework of a predetermined, systematic plan to eliminate all political opponents – was overturned only a few days ago in Buenos Aires.

So, Spain’s “desaparecidos”, including Lorca, may not be able to find justice in Argentina either.

“Forgive me, my country! For my blood is now walking on your asphalt.” These lines were written by Omar Hazek, a young Egyptian poet who came to prominence during the Arab uprising.

Hazek saw an obvious link between Lorca and Saeed. Born 60 years apart, they were both innocent victims of brutal regimes.

As someone who strongly identified with the oppressed of the world, Lorca remains a global icon. The discovery and proper burial of his body would capture the imagination of the world. And it could finally force Spain to confront its past.

Lorca’s body is believed to be buried somewhere along a road between two small villages near Granada. But along this road, and many other roads all over Spain, thousands of other bodies are buried, too. Nearby on a commemorative stone one can read: “They were all Lorcas.“

And they all deserve justice. 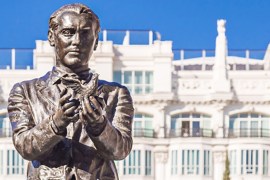 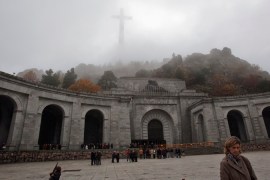