More than 900 Palestinians have been injured in confrontations with Israeli forces in the last 10 days over the al-Aqsa Mosque compound, according to the Palestinian Red Crescent.

They also highlighted that most of the injuries inflicted by the Israeli forces were from rubber-coated steel bullets.

International human rights groups have long condemned Israel’s use of such bullets.

The 39-year-old Mohammed Ismeal, currently being treated at Al Maqassid hospital in East Jerusalem, was apparently shot with a stun grenade in the head, which left him drifting in and out of consciousness.

“He wasn’t disabled. But now look at him. He can’t recognise anyone. It’s like he’s lost his memory,” Muataz Ismeal, the patient’s brother, told Al Jazeera.

Suleiman Turukman, the doctor in charge of Mohammed’s case, said he feared for his patient’s life.

“His condition was serious. He was about to die. He is now improving slowly. But is disoriented and cannot recognise his family due to the trauma.”

The clashes with the Israeli forces that started with the closure of the al-Aqsa Mosque compound have continued since its reopening as Israel introduced metal detectors as a security measure at the entrances of the site.

The Palestinians see the move an attempt by Israel to expand its control at the Muslim-administered compound.

On Sunday, Israel installed new security cameras at the site which also angered the protesters.

“We pray each morning here and the police assaults us. I intend to keep praying here until Israel removes all what is new,” he added, referring to the security measures.

However, the Mufti of Jerusalem, Sheikh Muhammad Hussein, told the Voice of Palestine he demands a complete return to procedures that were in place before the initial attack at the shrine. 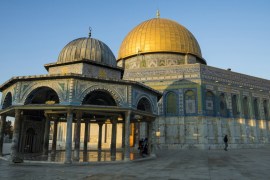