Moscow, Russia – During a surprise visit to the Khmeimim airbase in western Syria, Russian President Vladimir Putin ordered a withdrawal of Russian servicemen – and told them they were “going home victorious”.

They did not just prop up Syrian President Bashar al-Assad‘s regime that controlled an ever-shrinking territory and was nearing collapse when the Russian air strikes began in September 2015.

They defeated Russia’s own mortal enemies, Putin said on Monday.

“By helping the people of Syria to protect their statehood, repel attacks of terrorists, you have dealt a crushing blow, a defeat to those who directly, brazenly and openly threatened our country,” he said in televised remarks played dozens of times on Russian television networks.

For many in Russia, his speech sounded and looked like a well-staged start of an election campaign – a bring-the-boys-back-home pledge that helped countless politicians boost their approval ratings.

Just six days before the Syria speech, Putin said he would seek a fourth presidential term in the March 2018 election.

“Before an election campaign, it is right to announce the return of Russian forces back home,” Sergey Markov, a pro-Kremlin political analyst and former legislator with the ruling United Russia party, told Al Jazeera.

His traditional competitors who ran against him since 2000 – the famously uncharismatic, communist leader Gennady Zyuganov and the eccentric nationalist Vladimir Zhirinovsky, both in their 70s – are widely seen as nominal, insignificant figures whose participation will legitimise Putin’s re-election.

They are part of the so-called “systemic opposition” – a handful of political parties with a presence in the State Duma, Russia’s lower house of parliament, that rarely stand up against the ruling behemoth, United Russia.

Putin’s real rivals are effectively excluded from the campaign.

Anti-corruption crusader Alexey Navalny – who organised some of the largest anti-Kremlin rallies in post-Soviet history – is barred from running because of his suspended jail sentence.

Even such an obscure, marginal figure as Tatyana Sukhareva, a radical, gay feminist whose campaign was limited to a couple of YouTube videos, has been charged with fraud and is awaiting trial behind bars.

Some believe she made a secret pact with the Kremlin, and her campaign is designed to divide the opposition vote.

A 2018 calendar titled “The entire year with the president” featuring Putin’s photos and quotes is sold throughout Russia already.

Yet, Moscow’s triumph in Syria remains one of the most powerful means to electrify voters, amid a deepening economic crisis caused by Western sanctions over Putin’s boldest and most catastrophic political move.

From Donetsk to Damascus

The State Duma moved the election to March 18, 2018, the fourth anniversary of Russia’s annexation of Crimea.

Pro-Kremlin media dub it “Crimea’s return to Russia”, and it has raised Putin’s approval ratings to a stratospheric 88 percent.

But the annexation’s political and economic fallout proved disastrous.

Western sanctions hobbled Russia’s economy that had barely recovered from the 2008 economic meltdown, and the rouble’s value plunged in late 2014 after oil prices collapsed.

Pro-Russian separatists carved out small “people’s republics” in the eastern Ukrainian regions of Donetsk and Luhansk, but soon succumbed to chaotic, dog-eat-dog strife between themselves.

The July 17, 2014 downing of a Malaysian passenger plane over Donetsk killed 298 people, and once again, Russia became the West’s arch-enemy.

It lasted as long as it was supposed to, it ended with the results that were planned.

Alexey Mukhin, head of the Center for Political Information

By 2015, Putin urgently needed a new international “victory” – and found a new playground for his political games, in war-ravaged Syria.

Even the staunchest pro-Putin stalwarts see Moscow’s air strikes as an attempt to divert international attention from Ukraine.

“There was an obvious attempt to isolate Vladimir Putin, to completely isolate the Russian leadership, but after the Syrian campaign began, it became impossible,” Markov said.

Russia’s involvement in the Syrian war was an unexpected game-changer. It reversed the momentum in the conflict and helped Assad maintain a grip on power.

From Russia’s viewpoint, it also put former President Barack Obama’s administration in an awkward position, since it shared the Kremlin’s goal of defeating Islamic State of Iraq and the Levant (ISIL, also known as ISIS) and al-Qaeda, but resisted the larger goal of saving Assad.

Moscow deployed dozens of bombers and fighter jets and thousands of servicemen.

Within weeks, they were conducting up to 60 sorties a day, bombing Assad’s opponents of all stripes – and killing hundreds of civilians with incendiary and bunker-buster bombs.

The videos, coupled with massive propaganda on Kremlin-controlled television networks, kept Putin’s ratings well above 80 percent and boosted the self-esteem of ordinary Russians.

Fifty-seven percent of Russians consider their nation a “superpower” – two times more than in 2016, when only 26 percent thought so, state-run pollster VTsIOM said in March.

In 2003, three years into Putin’s first presidential term and 12 years after the Soviet collapse, only 12 percent of Russians shared the idea.

“The self-esteem of Russians keeps growing and this self-respect is mostly related to the active role and important position of Russia as an international player,” VTsIOM’s head Valery Fedorov said in a statement.

After the disastrous, decade-long Soviet-Afghan war that ended acrimoniously in 1989 and contributed to the USSR’s collapse, the Syrian campaign was Russia’s first major military operation outside the former Soviet Union.

“For Putin, this is an ideal war,” Alexey Mukhin, head of the Center for Political Information, a Moscow-based think-tank, told Al Jazeera.

“It lasted as long as it was supposed to, it ended with the results that were planned and, of course, Vladimir Putin will use the factor during his election campaign,” he added.

The Kremlin also managed to avoid – so far – turning the Syrian operation into a quagmire similar to the Afghan war, where at least 15,000 Soviet soldiers were killed and tens of thousands wounded and psychologically traumatised.

“It showed that Russia can learn its own mistakes of the Afghan conflict,” Georgi Asatryan, an independent Moscow-based expert on the Middle East and Afghanistan, told Al Jazeera.

“Russia learned that modern military campaigns, including counterterrorism campaigns, have to be waged with minimal interaction, without boost on the ground,” he said.

Meanwhile, Russia’s oil-addicted economy was going downhill because of the sanctions, cancerous corruption, an aging workforce, and the Kremlin’s failure to start structural reforms.

Additional US sanctions slapped on as punishment for Moscow’s alleged interference in the 2016 presidential vote targeted oligarchs and companies close to Putin.

As Russians drown in debt and witness dramatic cuts in healthcare and education programmes, amid corruption scandals involving top officials, the Kremlin’s propaganda machine revs up – and needs the Syrian war more than ever.

Television shows create an image of Russia as a “besieged fortress”, and Putin as a global peacekeeper fighting ISIL and maintaining the “legally elected” Syrian government.

Many average Russians buy the idea.

“Honestly, I support Putin because after all, he maintains peace,” Viktor Yegorov, a retired resident of the central city of Tver, told Al Jazeera. 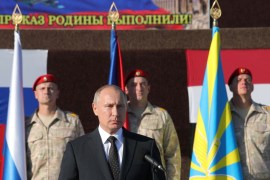 In surprise visit to airbase in Syria, Russian president orders his troops to start pulling out of the war-torn country. 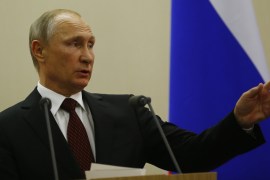