Russia has accused the US-led coalition of bombing the Syrian city of Raqqa “off the face of the Earth,” in the same way the Allied powers bombed Germany’s Dresden during World War II.

Russia’s Defence Ministry said in a statement on Sunday that 200,000 people lived in Raqqa before the conflict, but no more than 45,000 remained.

“Raqqa has suffered the fate of Dresden in 1945 when the city was wiped off the face of the Earth by Anglo-American air raids,” it said in a statement.

“In comparison, Deir Az Zor city, with its vast suburbs along the Euphrates, used to have a population of more than 500,000 before the war. The territory was liberated by the Syrian Arab army supported by Russian forces in 10 days,” it said.

“This makes one suggest that the US coalition is trying to cover its barbarian bombardments that buried thousands of civilians as the coalition was ‘liberating’ them from ISIL.”

The US-led coalition, which operates in both Syria and neighbouring Iraq, says it takes all possible measures to avoid civilian casualties.

However, in August, it acknowledged the deaths of 624 civilians in its attacks in Syria and Iraq since 2014, although rights groups say the number is much higher.

'@mod_russia: Raqqa #Syria🇸🇾 has suffered a fate of Dresden in 1945 when the city was wiped off of the face of the earth pic.twitter.com/UADtP1jP6v

The Syrian Democratic Forces (SDF), an alliance of Kurdish and Arab forces backed by the US, captured Raqqa last week after a four-month operation against the Islamic State of Iraq and the Levant (ISIL, also known as ISIS).

ISIL overran Raqqa in 2014, turning it into the de-facto capital of its self-declared “caliphate”.

Vladimir Sotnikov, a Moscow-based Middle Eastern policy analyst and senior research fellow at the Institute of Eastern Studies, told Al Jazeera that Russia was growing increasingly angry over the role of the US in fragmenting Syria.

“The US coalition has been helping opposition forces gain territory from Bashar al-Assad’s army. Moscow is not happy with Damascus losing ground to rebel groups,” he said. “This latest outburst is a message to the Trump administration that Russia is a major player in the Syrian conflict and will not sit idly by and watch the break-up of the country.”

The Syrian conflict, which began with peaceful protests in March 2011 against Assad, has spiralled into a multisided civil war.

According to UN estimates, the death toll stands at more than 400,000. 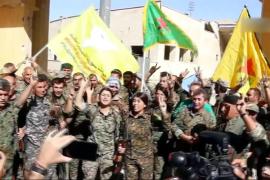 What role will US play in Syria’s Raqqa after ISIL?

US forces played a key role in the removal of ISIL from the Syrian city of Raqqa. US President Donald Trump has claimed credit for changing the attitude of the military.