Two small, uninhabited islands, Tiran and Sanafir, stand guard between Egypt and Saudia Arabia at the mouth of the Gulf of Aqaba. It is Israel’s only gateway to its southern port of Eilat and its vital trade connections to south-east Asia.

Exactly 50 years ago, Egyptian restrictions on Israeli shipping through the Straits of Tiran contributed to the outbreak of the 1967 Arab-Israeli war.

In a highly controversial move, the Egyptian parliament earlier this month approved the handover of the two Red Sea islands to Saudi Arabia. In return, Riyadh is to provide billions of dollars in loans and investments to help Egypt’s ailing economy.

But while the transfer has provoked widespread protests in Egypt, with opponents claiming it amounts to “selling off” Egypt’s sovereign territory, Israel has quietly given the deal its blessing.

This surprised some observers, especially since the movement of vessels to Eilat hangs on a peace treaty signed by Israel and Egypt in 1979. Effectively, Riyadh will now become responsible for upholding the treaty’s clauses relating to Israeli shipping through the Straits.

Riyadh, unlike Egypt, has never signed a peace agreement with Israel and, at least ostensibly, has no diplomatic relations with it. The two have traditionally been seen as regional enemies.

READ MORE – Saudi and the Brotherhood: From friends to foes

But Israeli and Palestinian analysts say that picture of historic hostility between the two states is obsolete, and that Israel has potentially much to gain from the handover.

The benefits include increasingly normalised relations with Saudi Arabia and the chance to bring into the daylight an emerging Israeli-Arab military and diplomatic front against a common enemy: Iran.

But perhaps most importantly, say analysts, improved relations will help Israel further isolate the Palestinian leaderships in Gaza and the West Bank. That will add to the pressure on them to accept final-status arrangements on the best terms possible for Israel.

According to Menachem Klein, a politics professor at Bar Ilan University near Tel Aviv and an expert on Israeli-Egyptian relations, Israel regards Egypt and Saudi Arabia as the region’s two key Arab power brokers.

“Israel wants to deepen security and diplomatic cooperation with both of them,” he told Al Jazeera. “It hopes eventually to use its leverage with them to gain their support for imposing a regional solution on the Palestinians.”

Improved relations with Saudi Arabia will help Israel further isolate the Palestinian leaderships in Gaza and the West Bank. That will add to the pressure on them to accept final-status arrangements on the best terms possible for Tel Aviv.

Israel’s increasingly tight ties with both Cairo and Riyadh, said Klein, have made possible an increasingly relaxed attitude towards the 1979 peace treaty, which required Israel to pull its occupying forces out of Sinai.

In particular, noted Klein, since Abdel Fattah el-Sisi came to power in Cairo in 2013, Israel had turned a blind eye to Sinai’s status as a demilitarised zone. Instead, it has allowed ever-larger numbers of Egyptian troops into the peninsula, on its southern border, to deal with violent Islamist groups there and enforce Egypt’s blockade of Gaza, alongside Israel’s own siege.

“The two are definitely coordinating in Sinai,” Klein said. “Israeli drones fly over the area with Egyptian permission, and they share intelligence.”

Meanwhile, said Klein, there had been widespread reports of the Saudis and Israelis normalising relations on trade, security and intelligence matters. Israel is even reported to be training Saudi army officers.

Israel raised no objections over Donald Trump’s recent announcement of a $110bn weapons deal with Riyadh, even though Israel usually objects to any moves that threaten what it terms its “qualitative military edge”.

In addition, the Times of London cited US and Arab sources last week saying that Israel and Saudi Arabia are forging economic ties that would allow Israeli businesses to open in the Gulf and permit Israeli aircraft to fly through Saudi airspace. The report echoed claims made in the Wall Street Journal last month.

The Israeli media has assumed these are incentives hammered out as part of Donald Trump’s visit to the region last month to help the new US president realise his “ultimate deal” to create a Middle East peace.

READ MORE – Gaza power cuts: ‘This is the worst it\’s ever been’

His son-in-law and adviser, Jared Kushner, arrived in Israel last week. According to the Israeli media, the US administration intends to up the pressure on Israel and the Palestinians to renew peace talks.

And in a further sign of tightening relations between Egypt, Saudi Arabia and Israel, there are reports that Cairo and Riyadh have revived a scheme to build a 10km-long bridge connecting their two peninsulas, at the mouth of the Gulf of Aqaba.

That would create a rail and road link, making it easier to transport goods to Egypt and providing thousands of jobs for Egyptian workers.

The plan was first raised in 1988 but dropped in the face of strong Israeli objections. It now appears that Israel has given the project its backing. Other reports suggest there may be plans to extend a rail line between Saudi Arabia and Jordan to Israel.

Bonds between Israel and Saudi Arabia are likely to become stronger under 31-year-old Mohammed Bin Salman, who was named as Crown Prince this week by his father, the Saudi king.

Writing in the Israeli daily Haaretz, Daniel Shapiro, a former US ambassador to Israel, observed that Bin Salman’s elevation was “nearly a dream come true” for Israel. The newly crowned prince is expected to make targeting Iran and its regional Shia allies his top priority.

“We are seeing a regional realignment,” said Samir Awad, a politics professor at Bir Zeit University near Ramallah. “If Iran is now the biggest enemy, then the Saudis believe they need Israel’s military might and its intelligence to help in that fight.”

He told Al Jazeera: “Israel is not denying the Saudis anything at the moment.”

Shawqi Issa, a Palestinian analyst and former government minister in the Palestinian Authority, said Israel may, in fact, have been the one pushing for the handover of the Tiran and Sanafir islands to Riyadh.

One theory is that Israel prefers Saudi authority over the islands because it will effectively tie Riyadh to the commitments made by Egypt in the 1979 peace treaty.

An unnamed source close to the Saudi royal family told Al-Monitor last month that the islands’ transfer would require closer regional security arrangements in the Gulf of Aqaba between Israel, Saudi Arabia, Egypt and Jordan.

That, in turn, would allow Israel to become more closely involved in surveillance of the activities of Islamist fighters in Sinai.

The Palestinians are at the weakest point ever in their history. They are territorially split between the West Bank and Gaza, the economy is in deep trouble, and Palestinian society is breaking apart. This is Israel’s opportunity to impose any solution it wants.

Issa told Al Jazeera: “What’s new is that Saudi Arabia is now happy to go public with its alliance with Israel against Iran and anyone else it opposes in the region.”

But, according to the analysts, Israel will seek to parlay the diplomatic capital it has gained in approving the handover of the islands into Egyptian and Saudi help on the Palestinian issue.

Israel would try to persuade Cairo and Riyadh to assist in its plans to impose on the Palestinians a potentially disastrous final-status arrangement, said Issa.

The strategy already has a name among Israeli and American officials, who call it the “outside-in” approach.

A regional agreement normalising relations with Israel has long been on the table. Saudi Arabia, with Arab League backing, offered a comprehensive peace initiative back in 2002.

Israel has studiously ignored it, however, because in return Israel was expected to recognise a Palestinian state.

But in the current circumstances, Israel may stand a better chance to realise a deal more to its liking.

“The Palestinians are at the weakest point ever in their history,” said Issa. “They are territorially split between the West Bank and Gaza, the economy is in deep trouble, and Palestinian society is breaking apart. This is Israel’s opportunity to impose any solution it wants.”

Awad said most Arab countries now preferred to focus on Iran over the Palestinian issue. “The Palestinians are mostly seen as a hurdle to their regional strategy.

“If the Americans cannot force the Palestinians to accept a ‘peace deal’ that is good for Israel, they will turn to Saudi Arabia and Egypt to make them do it for them.”

Issa believes the outlines of a US-Israeli-Saudi-Egyptian plan for the Palestinians are starting to emerge.

It would offer Hamas a mini-state in Gaza, under Egyptian oversight, cementing the enclave’s separation from the West Bank, he said. Egypt and Saudi Arabia would use former Gaza strongman Mohammed Dahlan, a rival to PA President Mahmoud Abbas, as their intermediary.

In return, Arab states would pump millions into the economy, while Egypt would open its Rafah crossing to Gaza and increase the electricity supply to the enclave, relieving its current power blackouts.

Ben Caspit, an Israeli analyst, referred to a “secret program” last week that would involve the US, Europe, Egypt and the Gulf states.

He cited an Israeli military source stating that they would seek to pressure Hamas into agreeing to a long-term ceasefire and moves towards demilitarisation in return for aid.

Issad said: “The crisis in Gaza gives Hamas an excuse for signing on to a bad deal, saying its people can’t live like this forever. And Israel will be able to tell the world the Palestinians have a state.”

As for the West Bank, Issa suggested the slivers of territory there currently under nominal Palestinian control would, on the Israeli-US plan, become Jordan’s responsibility.

“The danger is Amman won’t be able to resist the pressure when it comes from Saudi Arabia, Egypt, Israel and the US,” he said. 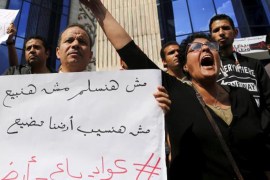 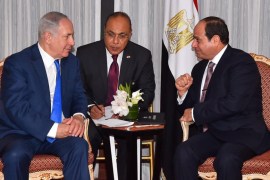