Over the weekend, cross-border violence between Israel and Syria set off an exchange of heated threats between the two countries.

On Saturday, the neighbours traded blame when Israel attacked Syrian artillery cannons, claiming it was responding to what might have been errant rocket fire that landed in the Israeli-occupied Syrian Golan Heights.

However, neither the cross-border violence nor the threats are new. There have been almost routine attacks in the form of rocket fire – as well as assassinations and air raids carried out exclusively by Israel – that have intensified since the war in Syria began in 2011.

However, while the Israeli army has frequently shelled Syrian military positions and bases throughout the war, Syrian government forces have never directly retaliated – although Israel speculates that some of the stray fire is intentional.

What types of attacks take place?

The violence from the war in Syria, which started in 2011, has spilled over the border between the two countries.

Israel’s attacks on the Syrian army happen sporadically and are thought to take place when stray fire – whether by the Syrian army or by rebels – falls within the Israeli-occupied Golan Heights, when arms convoys pass near the border, or when Iran-backed fighters launch rocket fire.

In the case of stray fire, the Israeli army says the Syrian government is responsible and retaliates by firing on government positions, sometimes deep inside Syria.

Following an incident of errant fire last week, Israeli Prime Minister Benjamin Netanyahu said: “We will attack anyone who attacks us. We won’t accept spillover. If they attack us, we return fire. And it doesn’t take much time.”

According to Ofer Zalzberg, the Israel/Palestine senior analyst for the International Crisis Group, there were approximately 20 attempted attacks by Iran-backed fighters on the border.

He believes that Israel also retaliates when there is “intentional ‘spillover’ by rebels who prod Israel to attack the Syrian military”.

Israel usually refuses to comment on attacks it conducts in Syria. However, it is suspected of carrying out the following infamous attacks:

Why are they so frequent?

Syria and Israel have technically been in a state of war since 1948, after the ethnic cleansing of Palestine and the Arab-Israeli war that ensued that year.

In 1967, Israel occupied the Syrian territory of the Golan Heights and continues to occupy part of it to this day.

The two countries signed a disengagement agreement in 1974 following the 1973 war between Israel, Syria and Egypt.

The border region has remained relatively quiet since then, but the eruption of the war in Syria unleashed a new chapter in Israeli-Syrian relations.

The metamorphosis of the war is critical to understanding the increase in such attacks over the past few years.

What started as an uprising against President Bashar al-Assad during the 2011 Arab uprisings, transformed into a civil war between the armed opposition and government forces vying for control of territory.

Though the armed opposition was making substantive gains in the first leg of the war, the intervention of Russia, Iran and Hezbollah on the side of Assad’s forces, tipped the scales in the government’s favour.

The growing power and influence of Iran and Hezbollah in Syria is Israel’s primary concern – a fear that it does not conceal.

In 2006, Israel and Hezbollah fought a bloody 34-day war that resulted in the deaths of more than 1,100 Lebanese, the majority of whom were civilians. An estimated 159 Israelis, including 43 civilians, were also killed by Hezbollah’s rocket attacks.

Worried that Iran is transferring weapons to Hezbollah, Israel has frequently targeted arms convoys, saying it would continue to block any attempts to buttress the Lebanese movement.

Netanyahu has accused Iran of “turning Syria into a base of military entrenchment” and wanting to use “Syria and Lebanon as war fronts against its declared goal to eradicate Israel”.

In August, an Israeli military official admitted for the first time that the country’s army had attacked Syrian and Hezbollah arms convoys dozens of times over the last five years.

“To Israel, security is a red line. Any threat or even any perceived threat is enough reason for Israel to retaliate with air raids, shelling, whether the Syrian army positions, or Hezbollah positions, or the Iran Revolutionary Guard fighters,” Syrian political analyst Omar Kouch told Al Jazeera from Istanbul.

“Israel wants to show the region that it has the upper hand and can strike any target it wants,” he added. “When a shell falls to the Israeli side by mistake, Israel responds by striking the base or the area it came from. This is a show of force and sends a signal to all the parties.”

While the Syrian government says Israel is collaborating with “terrorist groups” inside Syria and uses such attacks as an excuse to target the government, Israel lays blame on the Syrian army for any rockets emanating from areas under its control.

According to analysts, both countries are to blame for any escalation of border violence.

Sobhi Hadidi, an independent Syrian political analyst based in France, says that although the “concept of blame does not exist in international relations”, the two countries play a distinct role.

“If you’re speaking about international law, then Israel is to blame because it is attacking another country. But the Syrian regime is also involved in provoking Israel by encouraging Hezbollah,” Hadidi told Al Jazeera.

Will the attacks lead to a full-blown war?

The likelihood of such tit-for-tat attacks leading to war is very low, analysts say.

“The regime has been hit by Israel over many years, and it has not responded once – not directly,” said Kouch, noting that the Syrian government is in a weak position vis-a-vis Israel.

Despite repeated threats from Assad, including most recently in a letter to the United Nations warning of the “grave consequences of such repeated aggressive attacks”, government forces have been bogged down by the six-year war.

Yet, some say a future escalation should not be ruled out.

“Over the last year, Israel ended its policy of ambiguity regarding attacks it perpetrates in Syria – among other things to underline there are steps it would not tolerate,” Zalzberg said.

“Initially, Assad chose to disregard them, but the more the balance of the fighting in Syria tilts in his favour, the more he feels able and obliged to retort.

“While a major escalation between the sides is unlikely, such a dynamic nourishes a transformation of the Israeli-Syrian relationship from one of de-facto indifference to active antagonism with low-level violence.” 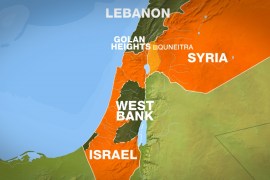 Deaths of fighters reported as government positions in Golan Heights are targeted for second time in recent days.