A draconic Israeli law is currently being challenged in the High Court of Justice. Following a confrontation between police officers who were trying to evacuate settlers from the occupied West Bank colony of Amona last February, the Israeli Knesset introduced the “Regularisation Law”. This law would allow the state to retroactively legitimise the expropriation of private Palestinian land on which settlements have been built.

In an effort to annul the law, in March the Association for Civil Rights in Israel, Peace Now, and Yesh Din submitted a petition to the Israeli High Court of Justice on behalf of 27 Palestinian local councils and 13 Israeli civil society organisations. The petition argued that by passing the Regularization Law the Knesset had exceeded its authority, violating basic property rights while discriminating against the livelihood, dignity and equality of the colonised inhabitants.

The new bill, they claim, breaches Israel’s basic laws and violates international humanitarian and criminal law. The petitioners conclude that it will lead “Israel to commit war crimes, putting each officer or private citizen involved in the implementation of the law at risk of being tried at the International Criminal Court”.

On August 21, the government submitted its official response, asking the High Court to reject the appeal. The government claimed that the law constitutes “a humane, proportionate and reasonable response to the real distress” of all those “Israeli residents” who live under “a cloud of uncertainty” which is “disrupting their lives.” The government added that within the existing reality “the owners [by which it means Jewish settlers] of the land are not benefiting from their rights …”

OPINION: Why is Netanyahu trying to disband the UNRWA?

By portraying the Jewish settlers as the subjects of human rights abuse and as potentially traumatised citizens, the government strives to justify the new law. However, in order to better understand Israel’s effort to legitimise this new chapter in the long chain of Palestinian dispossession, it is vital not only to take note of the structural inversion of human rights violations between Israelis and Palestinians, but also to historicise the government’s claim that colonisation is a form of healing aimed at preventing settler trauma.

The trauma of Sinai and Gaza evacuations

In 1982, as part of the peace agreement with Egypt, Israel evacuated settlements for the first time in its history – a move that was presented to the Israeli public as extremely costly, but as the necessary “price of peace”. Since then, conceding occupied territory has been portrayed as producing traumatic and “painful concessions”. Jewish trauma has thus become the tariff for better neighbourly relations.

In 2012, the Knesset held a ceremony dedicated to the 30th anniversary of Sinai’s evacuation. At the event, Knesset Speaker Reuven Rivlin, Israel’s current president, described the 1982 evacuation as a persisting trauma: “Today too, 30 years after the evacuation of the Sinai region, the memories and sights make our hearts tremble. The State of Israel needs to rectify the injustice of having forgotten you. It needs to remember you as the ones who paid the price of peace and Israel’s commitment to democracy.”

More than 20 years after Sinai, settlers limned the 2005 evacuation from Gaza and a handful of settlements in the northern West Bank using a similar script – namely, as a new moment of trauma – thus connecting it to the history of Jewish suffering. For them, the evacuation was part of the ongoing repetition of the Holocaust.

At the time, the Israeli military joined the bandwagon, distributing a Mental Preparations for the Disengagement Mission kit to the soldiers involved in the evacuation, while providing mental health training so that they could deal with the “traumatised settlers”. The Israeli social worker and psychologist unions also offered assistance to the distressed Gaza settlers, as the Israeli media framed the evacuation as producing a national psychological scar.

Undoubtedly, in both Sinai 1982 and Gaza 2005, settlers, soldiers, and other sectors of Israel’s Jewish population were distressed by the loss of their colony. But, then, the question is why does the loss of occupied land become such an effectively painful moment?

The spectre of Palestinian return

What was at stake in 1982 and 2005 and what is ultimately at stake in the government’s recent response to the High Court in relation to the Regularization Law, is the fear of the potential return of the colonised population to their lands. The stressful “cloud of uncertainty” referred to by the government denotes the possible disruption to the settlers’ lives by Palestinian reclamation of land which had been acquired through conquest, expulsion, and dispossession.

At the root of this permanent state of settler anxiety, then, is the fear of a Palestinian return to the lands that were confiscated from them. This is precisely the fear of the potential reversal of the Palestinian history of displacement.

As a way of managing this anxiety – the anxiety of those who are in a position of dominance and privilege, but nonetheless twist and distort history in order to portray themselves as the victims of permanent trauma – Israel’s settler colonial project simply reproduces itself.

Trauma, then, is not addressed through the abolition of the relationships of domination that produced it, but rather through the repetitive regularisation and legitimisation of conquest and dispossession.

The efforts to overcome this trauma by legalising land theft, however, fail to liberate the colonial perpetrators from their fears. Only decolonisation can disrupt Israel‘s ghoulish repetition compulsion and ultimately heal settler trauma. 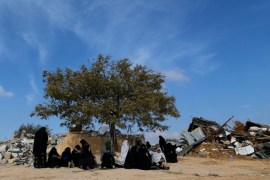 As Israel resumes its settlement expansion with impunity, Palestinians have plenty to protest at this year’s Land Day. 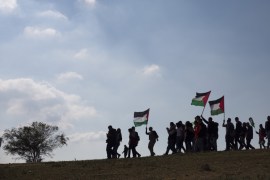 Palestinians are petitioning Israeli courts against a law that forces them to lease their lands to Israeli settlers.