The Palestinian envoy to the UN has told the Security Council that al-Aqsa Mosque compound crisis in East Jerusalem is at a tipping point, urging the council members to help protect Palestinians and their holy sites from Israel’s “reckless and destructive agenda”.

Riyad Mansour warned in his speech to the Council on Tuesday that “the stoking of a religious conflict is rapidly unfolding as Israel persists its illegal actions in occupied East Jerusalem”.

He accused Israel of “aggressive behaviour and provocative violation” of the historic status quo at the Muslim-administered al-Aqsa Mosque compound, referring to a brief closure of the holy site after a deadly shooting there that was followed by installation of CCTV cameras and metal detectors.

“We are clearly at the tipping point,” he said. “We must therefore again warn against the dangers of such provocations and incitement, and fuelling of yet another cycle of violence which will surely have far-reaching consequences.”

On the ground in East Jerusalem, Muslim leaders urged the faithful on Tuesday to keep up their prayer protests outdoors and avoid entering the compound, even after Israel dismantled metal detectors that initially triggered the tensions.

Sheikh Najeh Bakirat, director of al-Aqsa Mosque, said on Tuesday that the move does not fulfil the demands of the Muslim worshippers as the security cameras remain.

Sheikh Raed Saleh, an al-Aqsa official, said that the Palestinians would “never accept the current status, unless everything that was added after July 14 was removed.

“The picture until this moment is not clear. They are doing it in the middle of the night, in the cover of darkness, like bats. God knows what we are going to wake up to the next morning,” Saleh said.

Dozens of Muslim worshippers continued to perform prayers in the streets outside the compound on Tuesday.

Al Jazeera’s Imran Khan, reporting from occupied East Jerusalem, said that as the metal detectors were being removed, hundreds of Palestinians protested against the security cameras that remained in place

Israel said it would replace the metal detectors with new security arrangements based on “advanced technology”, reportedly including sophisticated cameras, but said it could take up to six months to install them.

On Tuesday evening the Israeli security forces used stun grenades and rubber bullets to disperse crowds of Palestinian worshippers outside the compound.

“Just after the evening prayers had finished, the Israeli security forces came out of the al-Aqsa Mosque compound and used stun grenades and rubber-coated steel bullets to disperse the crowd … We don’t know what sparked this latest round of violence but we do know that the Palestinian protesters were unarmed,” said Khan.

“I have counted at least five protesters injured when the Palestinian Red Crescent brought them in through here.” 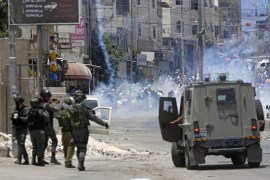