Seizing the 850-year-old Grand al-Nuri Mosque hands a symbolic victory to the Iraqi forces, who have been battling for more than eight months to recapture Mosul, the northern city that served as ISIL’s de facto capital in Iraq.

“The return of al-Nuri Mosque and al-Hadba minaret to the fold of the nation marks the end of the Daesh state of falsehood,” Abadi said in a statement, using an Arabic acronym for ISIL, also known as ISIS.

Iraqi authorities expect the battle to end in the coming days as the Islamic State of Iraq and the Levant (ISIL) group has been bottled up in a handful of neighbourhoods of the Old City.

A large part of the mosque was blown up by the group last week.

The mosque and its famed Al-Hadba (hunchback) leaning minaret were Mosul landmarks and also held major significance in the history of ISIL rule in Iraq.

Abu Bakr al-Baghdadi, the ISIL leader, appeared during Friday prayers at the mosque in 2014, soon after ISIL seized Iraq’s second-largest city, calling on Muslims to obey him, in what remains his only known public appearance.

Three years later, Baghdadi’s fate and whereabouts remain unknown, and ISIL has lost much of the territory it overran in 2014.

The fighters blew up the mosque and minaret on June 21 as they put up increasingly desperate resistance to the advance of Iraqi forces.

The loss of the iconic 12th-century minaret – one of the country’s most recognisable monuments – left the country in shock.

But the destruction had been widely anticipated, with commanders saying ISIL would not have allowed Iraqi forces to score a hugely symbolic victory by recapturing the site.

ISIL claimed on its Amaq news agency that the site was hit in a US air strike, but the US-led coalition said it was the fighters who had “destroyed one of Mosul and Iraq’s great treasures”.

Russia has said it is seeking to verify whether the ISIL leader, whose whereabouts have been unknown for months, was killed when its warplanes hit the group’s leaders in a night air raid in Syria last month.

Al Jazeera’s Bernard Smith, reporting from Erbil, said the recapture of the mosque compound was a significant blow to ISIL.

“What it helps us understand is how slow and how difficult a fight it has been to regain the Old City,” he said.

“Not long after ISIL forces blew up the al Nuri mosque and its minaret, Iraqi forces said they were about 50 metres away. It’s then taken more than a week to advance those 50 metres and to take control of the mosque compound.

“And even though Iraqi forces say they’ve got control of the area around the mosque, they’ve not gone into what’s left of the compound because they believe like everywhere else they’ve captured in the Old City, it’s been booby-trapped.” 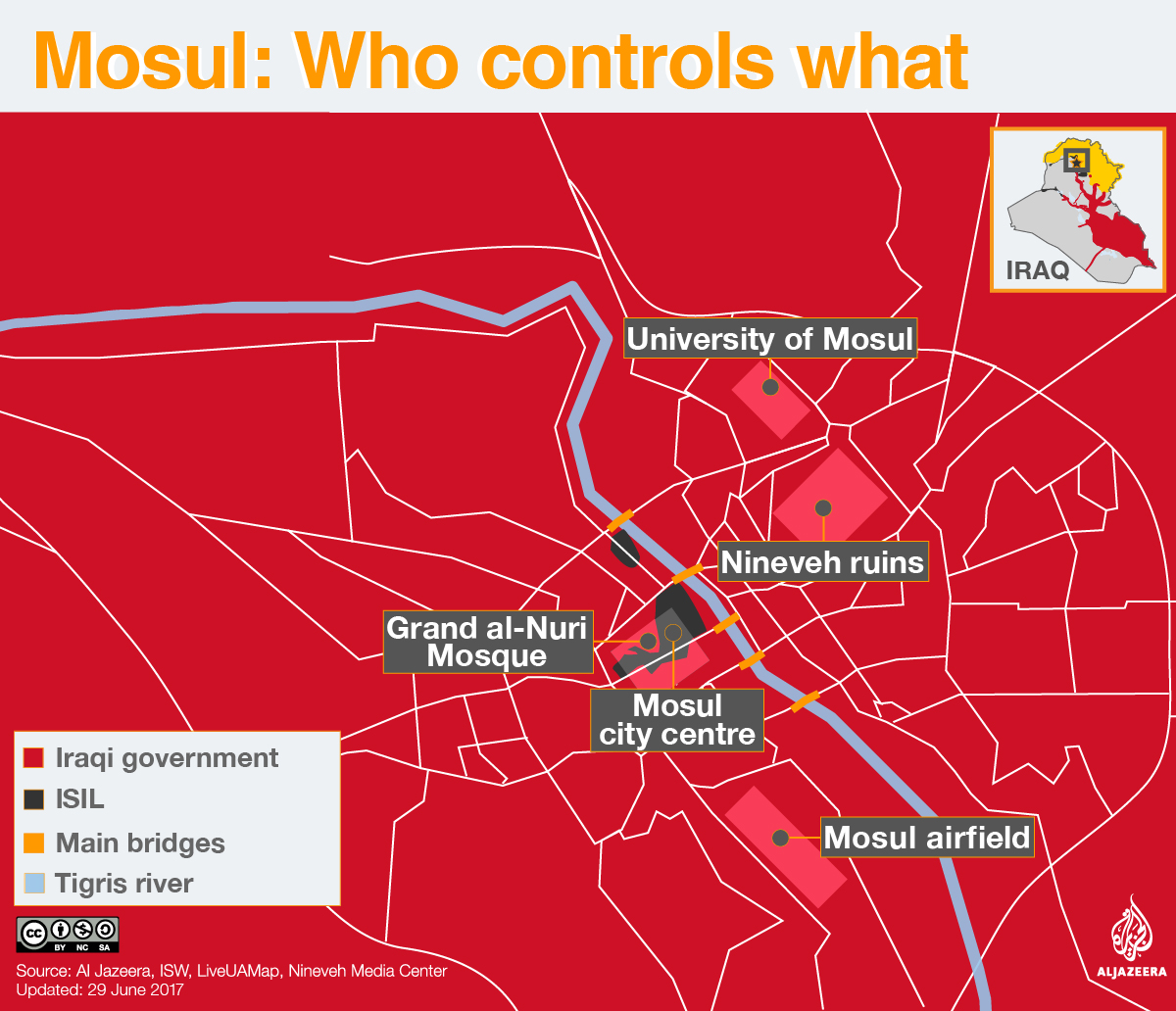 The mosque in Mosul’s Old City was the latest in a long list of priceless heritage and historical monuments destroyed by ISIL during its three-year rule over swaths of Iraq and Syria.

The minaret, which was completed in 1172 and had been listed for centuries, is featured on Iraq’s 10,000-dinar banknote and was the main symbol of Iraq’s second city – giving its name to countless restaurants, companies and even sports clubs in Mosul.

After seizing Iraq’s Sunni Arab heartland in June 2014, ISIL reportedly rigged the Hadba with explosives but was prevented from blowing it up by the local population. The fighters consider the reverence of objects, including such sites, as heresy.

The mosque’s destruction came three days after government forces launched an assault on the Old City, the last district of Mosul still under ISIL control.

About 100,000 residents are believed to still be trapped in the district by ISIL, which has been using civilians as human shields to defend its last redoubt in Mosul.

The area still controlled by the fighters is small but its narrow streets and the presence of so many civilians has made the operation perilous.

ISIL has been offering fierce resistance in the Old City, with barrages of mortar fire and a huge number of booby traps slowing the Iraqi advance.

While Iraqi forces have made good progress to reach the Nuri mosque, Iraqi commanders have warned that the battle for the Old City is far from over.