Qatar has welcomed a statement by the United States questioning the motives behind a series of anti-Qatar measures imposed this month by several Arab countries, according to a report published in state media.

Ahmed bin Saeed Al-Rumaihi, spokesman for Qatar’s foreign ministry, expressed Doha’s “welcome” on Wednesday, a day after the US state department said it was “mystified” that Saudi Arabia, the United Arab Emirates (UAE) and their allies had not released their claimed grievances about Qatar.

Saudi Arabia, the UAE, Bahrain and Egypt severed diplomatic ties and cut off sea and air links with Qatar on June 5, accusing it of supporting “terrorism” – a charge Doha strongly denies.

The UAE said this week the sanctions could last for years unless Doha accepted demands that the Arab powers plan to reveal in the coming days.

Qatar’s Foreign Minister Mohammed bin Abdulrahman Al Thani said Doha would not negotiate with its neighbours to resolve the dispute unless they first lift the trade and travel restrictions. 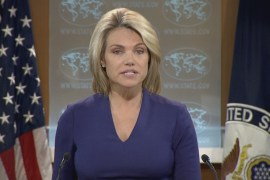