Fifty-eight people who were in London’s Grenfell Tower are still missing and are presumed to be dead, UK police announced on Saturday, raising the death toll in an inferno earlier this week that turned the public housing block into a charred ruin.

Police Commander Stuart Cundy said the latest number, which was based on reports from the public, may rise and includes the 30 deaths that have already been confirmed after Wednesday’s blaze at the west London 24-storey building. He said it will take weeks or longer to recover and identify all the dead.

“Sadly, at this time there are 58 people who we have been told were in the Grenfell Tower on the night that are missing, and therefore sadly, I have to assume that they are dead,” he said.

Cundy said there may have been other people in the tower that police are not aware of, which would add to the final death toll. He asked anyone who was in the tower and survived to contact police immediately.

The first victim has been formally identified as 23-year-old Mohammed Alhajali, a Syrian refugee who lived in Grenfell Tower.

Police say the harrowing search for remains had been paused on Friday because of safety concerns at the blacked tower but has now resumed, with emergency workers reaching the top of the tower.

The identification of the victims is proving very difficult – which experts attribute to the extreme heat of the fire. British health authorities say that 19 fire survivors are still being treated at London hospitals, and 10 of them remain in critical condition.

Cundy said police will investigate the tower’s refurbishment project, which experts believe may have left the building in the North Kensington area more vulnerable to a catastrophic blaze.

The government has promised a full public inquiry, but that has done little to a sense of frustration and anger among residents and neighbours who demand answers for how the blaze spread so quickly and trapped so many of the tower’s roughly 600 residents.

Some Grenfell Tower residents had warned months ago fire safety issues at the building meant that it was at risk of a “catastrophic” event.

They say their complaints were ignored – and fear it was because the tower housed mainly poor people in an extremely wealthy neighbourhood.

British media have reported that contractors installed a cheaper, less flame-resistant type of exterior panelling on the tower in a renovation that was completed just last year.

British Prime Minister Theresa May, facing criticism for the government’s handling of the disaster, on Saturday met a small group of fire survivors at her official residence at 10 Downing Street.

The meeting is unlikely to quell complaints that May has been slow to reach out to victims, despite her announcement of a $6.4m emergency fund to help the displaced families. May was jeered on Friday after she visited the affected community.

Al Jazeera’s Sonia Gallego, reporting from west London, said there has been a lot of distress in the area at the slow release of information and the perceived lacklustre response by the authorities.

“There is also a lot of anger and frustration at the lack of any kind of presence here of the local council. The local community really has been spearheading a lot of the support here to try to give those affected by the fire food, water and shelter,” she said.

The tragedy has provoked a huge response from nearby communities. More than three million pounds ($3.8m) have been raised for the affected families.

Hundreds have been left homeless by the blaze, putting more pressure on officials in a city plagued by a chronic housing shortage. Many of the displaced are living in churches and community centres.

So far, 109 families have been given temporary accommodation by in hotels within the local area, Gallego said.

“But it is still not 100 percent certain if they will be [permanently] re-housed in the borough. That is very controversial here, as it is a place that people have made their homes, have families, and have networks,” she added.

Scuffles broke out near the Kensington and Chelsea town hall offices on Friday as demonstrators chanting “We want justice!” surged towards the doors.

Engineering experts and fire safety specialists believe the building’s exterior cladding may have quickly fuelled the blaze, overwhelming fire protection devices. British officials have ordered a review of other buildings that have had similar renovations.

The use of flammable cladding in tall buildings is banned in some countries, including the United States and Germany. Grenfell residents also claimed that newly installed gas pipes running up the inside of the building were not boxed in with fire-retardant covers, and there was no sprinkler system.

Ronnie King, the UK’s former chief fire officer, told Al Jazeera: “I wouldn’t wish to denigrate those who installed the cladding because – whatever the cladding was – it did not have to be fire resistant under the building regulations,” said King.

“We were seeking a change to the building regulations for that very purpose.”

King also said that there are around 4,000 tower blocks in the UK without automatic fire sprinkler protection systems in place.

Two Underground lines near the fire area were partially shut down on Saturday to make sure that debris did not land on the tracks. 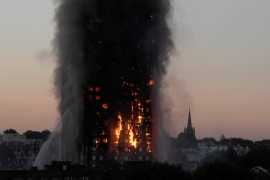 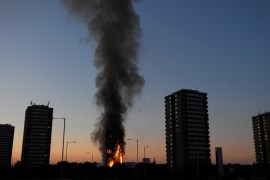 At least 12 dead and at least 68 people taken to hospital after fire engulfs the 24-floor building.