The army chiefs of Russia and Iran have vowed to continue the fight against “terrorists” and their supporters in Syria days after the US Navy launched a barrage of cruise missiles against a Syrian government airbase.

Speaking by phone on Saturday, Major General Mohammad Bagheri of Iran and General Valery Gerasimov of Russia “condemned the American operation against a Syrian airbase which is an aggression against an independent country”, Iran’s state news agency IRNA reported.

The US strikes “aim at slowing the victories of the Syrian army and its allies, and reinforcing terrorist groups”, the two chiefs of staff said in a statement.

They vowed to continue their military cooperation in support of Syrian President Bashar al-Assad “until the total defeat of the terrorists and those that support them”, according to the Mehr news agency.

Iran and Russia are Assad’s closest allies and label all opponents of his government as “terrorists”.

Both governments have defended Assad against Western allegations that his regime carried out a suspected chemical weapons attack on Tuesday on the rebel-held town of Khan Sheikhoun in Idlib province, killing at least 86 civilians.

The Syrian opposition and its backers have dismissed claims by the Syrian government and Moscow that civilians were exposed to the deadly chemicals after a rebel weapons depot was hit in an air raid.

Earlier in the day, Iran’s President Hassan Rouhani criticised his US counterpart Donald Trump for the missile attack the US launched in retaliation.

“This man who is now in office in America claimed that he wanted to fight terrorism but today all terrorists in Syria are celebrating the US attack,” he said.

Also on Saturday, Russian Foreign Minister Sergey Lavrov spoke over the phone with his US counterpart Rex Tillerson, just days ahead of the latter’s scheduled visit to Moscow.

Lavrov said the US “attack on a country whose government fights terrorism only plays into the hands of extremists, [and] creates additional threats to regional and global security,” according to a statement put out by the Russian foreign ministry.

Meanwhile, an air strike killed 18 civilians, including four children, in Syria’s rebel-held Idlib province on Saturday, according to the Syrian Observatory for Human Rights (SOHR), a UK-based monitoring group.

It said the attack on the village of Urum al-Joz was believed to have been carried out by Russian planes.

A separate strike on Khan Shaikhoun, where the alleged chemical attack was carried out earlier in the week, killed a woman and wounded her son, according to SOHR.

The groups Raqqa is Being Slaughtered Silently and Sound and Picture said the attack killed a woman and her six children.

According to the activists, the attack occurred in the Shuaib al-Zeker area, close to where US-backed Syrian fighters have been on the offensive against ISIL.

Activists and state media said a separate coalition air strike on the northern ISIL-held village of Hneida killed at least 14 civilians, including children.

Additionally, a bomb exploded aboard a bus carrying workers near the city of Homs, killing a woman and wounding more than 20, according to state TV and the SOHR. 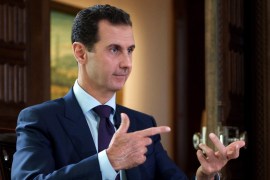 Iran’s interests in Syria will very soon supersede its support for Bashar al-Assad. 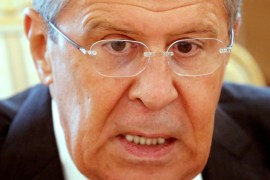 Moscow says use of airbase does not violate a UN resolution that prohibits supplying fighter jets to Tehran.