The Philippines plans to file a “strong” protest against China after it announced preparatory work for an environmental monitoring station on a shoal in the South China Sea, as President Rodrigo Duterte called for regional guidelines governing the disputed area.

Justice Minister Vitaliano Aguirre told reporters in Manila on Tuesday the government would file a complaint against Beijing’s plan to construct a radar station on Scarborough Shoal.

“The case which will be filed is fairly strong, I think,” Aguirre said.

Aguirre said the Philippines would also renew its strong ties with the United States in the face of China’s aggressive action in the shoal, which is 229km from the Philippine island of Luzon.

“As a matter of fact, we’re strengthening the relationship with the United States,” he told reporters.

Presidential spokesman Ernesto Abella also said in a statement that the country would take necessary action to defend and protect its sovereignty and entitlements in the disputed maritime borders.

“President Rodrigo Duterte has repeatedly asserted that the Philippines is not giving up its claims and our entitlements over the area,” he said.

The news comes as Duterte urged Southeast Asian leaders to complete rules on the South China Sea, “to maintain the peace and stability in the region”.

“We recognise too that respect for freedom of navigation and overflight is in the interest of all countries within and outside the region,” said Duterte following a meeting with Thai Prime Minister Prayut Chan-ocha in Bangkok.

Only two days earlier on Sunday, Duterte was quoted as saying the Philippines “cannot stop China” from proceeding with its plan.

“What do you want me to do? Declare war against China? I can’t. We will lose all our military and policemen tomorrow and we [will be] a destroyed nation,” said Duterte.

The president’s statement alarmed Philippine legal scholars, including Supreme Court Justice Antonio Carpio, who said the president has the constitutional responsibility to defend the country’s territory.

Five years ago, China started blockading the Scarborough Shoal, a rocky outcrop within the Philippines’ 322km exclusive economic zone (EEZ), and the United States has warned Beijing against carrying out the land reclamation work there.

Last week, the mayor, who is in charge of the administration of the disputed South China Sea islands and reefs controlled by China, said preparatory work was being planned this year to build monitoring stations on a number of islands, including in the Scarborough.

China until late last year had two to three coastguard ships guarding the shoal and stopping Filipinos from tapping its vast fish stocks.

An international tribunal ruled last year that Beijing violated Manila’s entitlements and no country has sole rights to fish there.

However, just days after Duterte visited China and heralded a new era of ties, Filipinos returned to fish at the periphery of the shoal, unimpeded by Chinese vessels.

China has put missiles and radar on some of its seven man-made islands in another part of the South China Sea, a strategic waterway claimed by Brunei, Malaysia, the Philippines, Taiwan and Vietnam. 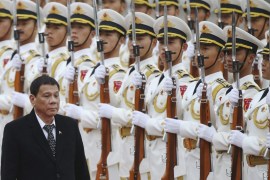 Are US allies in Southeast Asia defecting to China?

Malaysia and the Philippines’ rapprochement with China is the result of temporary alignment of interests. 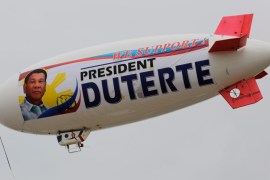 Duterte is questioning the Philippines’ century-old US alliance while ramping up his diplomatic flirtation with China.