Saudi Arabia and three other Arab countries that have imposed a political and economic blockade on Qatar are to drop their demand that the Al Jazeera Media Network be shut down.

The anti-Doha quartet then issued a 13-point list of demands that included shutting down Al Jazeera Media Network, severing all ties with the Muslim Brotherhood and with other groups, including Hezbollah, al-Qaeda and ISIL (also known as ISIS), limiting Qatar’s ties with Iran and expelling Turkish troops stationed in the country.

In an interview published by The Times newspaper on Wednesday, Noura al-Kaabi, the UAE minister for the federal national council, said the Emirates sought “fundamental change and restructuring” of Al Jazeera rather than to shut it.

“The staff at the channel can keep their jobs and Qatar can still fund a TV channel but not one which provides a platform for extremists and where the English channel is a protective shield for the much more radical Arabic one,” Kaabi told The Times.

She also said that the Saudi-led group was ready to negotiate with Qatar.

“We need a diplomatic solution. We are not looking for an escalation.”

The group previously called the list of demands “non-negotiable”.

In response to the concessions expressed by the UAE minister, Al Jazeera Media Network rejected outside intervention.

“Al Jazeera Media Network rejects any external intervention pertaining to its organisational structure or journalistic mission, and reiterates its independence & professional editorial stance,” the Network said in a statement.

“Al Jazeera continues to stand by journalists and media institutions globally for their right to practise journalism without fear or intimidation. One of the cornerstones of free media is ensuring its ability to operate independently, without interference or censorship from governments or any other party.

“Over the past 20 years, Al Jazeera has demonstrated its editorial independence and refusal to bow down to pressures from anyone, serving as a testament to our commitment to the universal values of journalism.

“It’s clear that recent attempts by governments in the region and elsewhere to throttle the independence of the media is being met by condemnation by all international media institutions, with an urgent demand for an end to interference, intimidation, and threats.

Press freedom and human rights advocates, journalists and social media users from all over the world condemned the demand by the Saudi-led group to shut down Al Jazeera and other media outlets in Qatar, calling it “unacceptable”.

“We are really worried about the implication and consequences of such requirements if they will ever be implemented,” Alexandra El Khazen, head of the Middle East and North Africa desk at Reporters Without Borders, said last month.

“This is just an attempted expansion of the cowardly censorship they have inflicted on their own citizens, but it will fail,” said Whitson.

The Guardian newspaper, in an editorial published last month, said the demand was “wrong”, “ridiculous” and “must be resisted”, joining the growing chorus of voices raising concerns about suppression of press freedom in the Gulf. 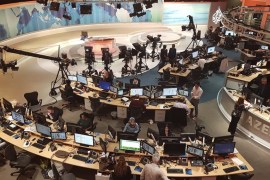 We examine what Al Jazeera symbolises in the GCC political crisis. Plus, a war of buzzwords in South Africa’s media.