Beirut, Lebanon – The Lebanese government intends to request $10-12bn from donors at the “Supporting the Future of Syria and the Region” conference hosted this week by the European Union in Brussels. These sums, requested over 5-7 years, represent double the amount currently received by Lebanon.

While the government is invoking the risks of civil unrest and economic collapse, and threatening to force refugees away if not enough funds are received, the reality on the ground is far more complex and hints at the political opportunism of the country’s ruling class.

Lebanon continues to have the highest share of refugees per capita in the world: An estimated 1.5 million Syrian refugees, almost a quarter of the country’s population. While this large influx has definitely added social and economic pressures to an already fragile country, evidence on the economic and fiscal repercussions of the refugee crisis remain sketchy at best.

The official public discourse, backed by several international development agencies and leaders of the country’s main political parties, pushes the arguments that refugees have negatively affected public services; put public finances and economic growth in the red; and have driven many Lebanese out of their jobs.

Based on this assessment, public authorities have built a case to donors requesting funding to invest in water, electricity, schools, roads and other public services; in order to help the host communities and compensate for the damages inflicted by the growing number of refugees.

In parallel, authorities decided since 2014 to toughen the entry and residence regulations for Syrians, who used before that date to enter the country freely and work in the agriculture, construction and similar sectors with no restrictions (given the lack of Lebanese workers in the low-skilled categories).

Using a populist protectionist rhetoric, the Lebanese authorities required that Syrians obtain residency permits even if they were registered as refugees. These permits were linked to obligatory notarised pledges not to work and to “abide by Lebanese legislation”, and for those seeking jobs, a letter of sponsorship from the employer was mandatory.

All these requirements came with fees ranging from $300-1,000, sums beyond the reach of any refugee family. As a result, only 21 percent of Syrian refugee households had legal residency permits in 2016, compared to 58 percent in 2014.

Restrictions on refugees not only expose them to higher vulnerability and exploitation, but are also at odds with the refugee population’s substantial contribution to the local economy. Refugees spend almost all of their income in Lebanon: Estimated in 2016 at an average expenditure of $106 a person per month, the total yearly internal consumption of refugees reached $1.5bn.

This large sum is spent mostly on food, rent and basic needs purchases, mainly in Lebanese shops and small businesses. Also, most Syrian refugees rent apartments in residential buildings, with an average monthly rent of about $200-300.

More than half of these apartments are below 35 square metres, with poor conditions and inadequate amenities. The rental market for refugees generates every year nearly $50m in revenues for Lebanese landlords.

Refugees have also provided a large pool of cheap (and unfortunately, unprotected) labour for the Lebanese economy. Most Syrians work in sectors that the Lebanese tend to avoid, earning on average $250 a month, much lower than the national minimum wage set at $450.

And since they do not have formal contracts, employers are not obliged to pay social security or insurance contributions. This situation has caused, for several years now, a very low wage bill in substantial sectors of the Lebanese economy, allowing profits to be accumulated and consumer prices to remain stable.

There is also a lot of data that discredit the claim that the Lebanese economy is on the “verge of collapse” because of refugees. The country received since the beginning of the Syria crisis more than $1.5bn every year in aid funds, mostly spent on humanitarian and basic needs assistance, in areas not covered by local public spending.

The number of mobile phone subscribers almost doubled from 2.9 million in 2011 to 5.7 million in 2016. This increase could be largely attributed to Syrian refugees’ subscriptions, as recent survey data has shown that 85 percent of refugee households owned a mobile phone. And while it is true that tourism, foreign investment, and other economic indicators may have declined during the same period, the net overall effect on the economy remains balanced at best, but definitely not negative.

Given this, why would a government that denies the basic rights of a sizeable proportion of a resident population and contributes to its exploitation be given additional funds? Isn’t it the case that a more equitable, sustainable and cost-effective solution resides in legalising the residency and work status of Syrian foreign residents and refugees, and requesting tax contributions from all these residents to cover the cost of public amenities?

Public infrastructure projects should be funded through a well-crafted, long term and self-financing plan, and not be subjected to political profiteering. Knowing that most of the new funds recently requested by the Lebanese government will come in the form of loans, and given the already poor track record of governmental institutions in terms of transparency, efficiency and accountability, these new funds will only benefit the patronage networks of Lebanon’s rulers, and add more liabilities to an already oversized public debt. 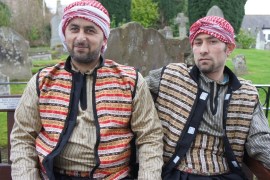 Syrian refugees get a warm welcome in Scotland

Scots and Syrian refugees come together to share their cultures and experiences. 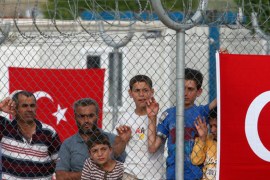 President Erdogan says some refugees who pass screenings will be granted nationality to “make use” of their skills.