Condemnation of the brutal campaign of ethnic cleansing being carried out against the Rohingya Muslims in Myanmar is growing around the world, with the Dalai Lama, the Pope, Nobel Laureates and world leaders from many countries calling for an end to hostilities.

There is no easy way to end the suffering there, but it is imperative that the world speaks out as one against such atrocities, yet the UK government’s voice has barely been heard at all. Of all the countries that should be playing a role in protecting the vulnerable Muslim minority people in Myanmar, the UK should be leading efforts, as blame for the conflict in those lands is very easily traceable back to British Colonial times.

Even without knowing the dark secrets of British involvement, people are horrified about what is happening in Myanmar, with hundreds of thousands of people forced from their homes by violent vigilantes, either led by or with help from the army and stories of rapes and murder commonplace, alongside the dramatic footage of burning villages. The hatred which has been stirred up by nationalists is all too obvious in the TV reports and the Islamophobia that has been created by (among others) Ashin Wirathu, a monk who calls himself the “Buddhist Bin Laden”, is truly frightening.

If the UK and other western countries do not tackle this and condemn the attacks on a Muslim minority people, this inaction will again be seized upon as evidence of the West’s hatred of Islam by extremists with another agenda. They will do nothing to help the Rohingya but will use their name for propaganda and recruiting more fighters for their cause, just as they have with previous examples of Muslims being persecuted.

The Rohingya have been living in those lands for over two hundred years, but resentment over the internal displacement of Buddhists stems back to 1826 when Britain annexed the part of Myanmar where most Rohingya Muslims live today. Bengali Muslims arrived in large numbers to become labourers and administrators for the British, but it is not the colonists who are blamed for this in today’s nationalist narrative, but the descendants of these migrant workers.

Myanmar gained independence from Britain in 1948, but the position of the Rohingya Muslims has become ever more perilous. The United Nations has described the Rohingya Muslims as the most persecuted minority in the world. Attempts at creating an independent state for themselves have failed, and they have been denied citizenship in their own country since 1982 and with it the right to education, healthcare or even property ownership.

Far from speaking out against the violence, Aung San Suu Kyi has hidden behind the same language of having to fight terrorists as was used by Bosnian Serbs in the 1990s, Western leaders in the “War on terror” in Iraq and Libya, Israel’s persecution of Palestine and Saudi Arabia destroying the lives of the poor people in Yemen. Although she is not alone in her hypocrisy, as a Nobel Laureate, expectations of her are much higher. Yet her response so far has been mealy-mouthed, and the British government have not held her to account when they most certainly have the opportunity to do so. Last year the UK sold weapons worth half a million pounds to the government in Myanmar, which could very well be used against the Rohingya now. £250k was taken from the UK’s aid budget to train the army there, which in this climate of violence is completely inexcusable.

Aung San Suu Kyi has personal as well as political ties with the UK, having a British husband and two sons born and raised in the UK. She not only graduated from Oxford University with a degree in Politics, Philosophy and Economics, but returned to live in the UK after working briefly at the UN. She married British scholar Michael Aris in 1972, and lived in the UK until 1988, giving birth to and raising their two sons Alexander and Kim Aris there. Her sons continued to be raised in the UK by their father when she returned to Burma to first look after her ailing mother and then to lead the political opposition, and hence are British citizens.

When the Taliban blew up ancient monuments to Buddha in Afghanistan, there was an immediate angry reaction to the desecration of such important artefacts of cultural significance – rightly so. The problem is that rape, murder, and the destruction of people’s homes in Myanmar has not inspired the same level of reaction.

The UK needs to step up and provide leadership in alleviating the suffering in Myanmar:

1. The Myanmar government is stopping UN aid from getting in: we must demand that blocks are removed immediately so that humanitarian aid can reach people. Charities are raising money already, so we must ensure it gets to where people need it most. There is also a huge humanitarian crisis in Bangladesh where the UK must play a leading role in aid efforts.

2. Our government must acknowledge the UN findings of ethnic cleansing and “slow genocide” and the hate speech being used by the military, Buddhist extremists and nationalists against Rohingya Muslims. We must stop using the language of “ethnic tensions”, as this is misleading and disingenuous; instead, we must join the coalition of genocide charities, Nobel Peace Prize winners, and faith leaders in condemning what is happening in the strongest possible terms.

3. We must demand unequivocal condemnation from Aung Sang Suu Kyi: A UN report has already gathered damning evidence. Its recommendations need to be implemented, and the UK should use its place on the Security Council to more effect.

4. We must demand that citizenship rights be immediately given to Rohingya Muslims, the denial of which over many decades has made this latest persecution easier.

5. UK aid to Burma must be stopped (especially military training) until the situation is acknowledged and a way of measuring the results of any such training is established.

6. We should propose the re-implementation of sanctions which were lifted when “democracy” was supposed to have been introduced. The current human rights violations are not just on a par with, but even worse than those that had been taking place under the military regime.

Salma Yaqoob is an activist, commentator and broadcaster who was named by the Guardian as: “The most prominent Muslim woman in British public life”. Harper’s Bazaar magazine also named her among the thirty most influential women in the country. She appears regularly on Question Time, where she is best known for having given the former Conservative leader Iain Duncan Smith a dressing down over expenses and inequality. Salma has also appeared on BBC Newsnight, Channel Four & ITV news and written columns for the Guardian and others. She has received numerous awards, including an Honorary Doctorate from Birmingham City University for services to public life, having served as an elected councillor in the city. Salma is a qualified psychotherapist with a degree in Human and Applied Psychology, as well as Post Graduate Diploma in Counselling and Integrative Psychotherapy. She works as a Senior Manager in an NHS Mental Health Trust. 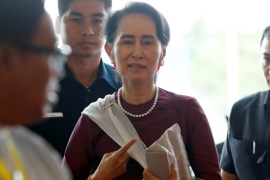