An Argentinian prosecutor began hearing evidence on Monday in a case involving seven people accused of contributing to the death of football superstar Diego Maradona.

Maradona’s nighttime caregiver, 37-year-old Ricardo Almiron, arrived just after midday (15:00 GMT) with his lawyer at the San Isidro public prosecutor’s office on the outskirts of the capital Buenos Aires.

Almiron is one of seven people under investigation for manslaughter after a board of experts looking into Maradona’s death found he had received inadequate care and was abandoned to his fate for a “prolonged, agonising period”.

The seven who face questioning were members of Maradona’s medical team.

A medical review panel of 20 physicians said in May that the accused acted in an “inappropriate, deficient and reckless manner” and with “criminal purpose”, claiming Maradona was not properly monitored before he died.

Maradona, the revered former Boca Juniors and Napoli star who had alcohol and drug addictions for many years, died on November 25 last year from heart failure, after undergoing brain surgery earlier that month.

Almiron is suspected of lying when he claimed the World Cup-winning captain was sleeping and breathing normally hours before he died. An autopsy revealed Maradona was dying at that time, but did not drink alcohol or take illegal substances in the days before his death.

Speaking to reporters after the interview, Chiarelli said Almiron “always treated Maradona as a patient with a complex psychiatric” condition but was never told about “an issue related to heart disease”.

“He was told by his superiors not to disturb the patient. My client had the wisdom to carry out his tasks without the patient feeling encroached upon, which was something he had to deal with the entire time he was there,” Chiarelli added.

The investigation was opened following a complaint filed by two of Maradona’s five children against neurosurgeon Leopoldo Luque, whom they blame for their father’s deteriorating condition after the operation.

The hearings, postponed from last month due to a spike in coronavirus cases in Argentina, will end with Luque, the 39-year-old neurosurgeon, on June 28.

The accused are barred from leaving Argentina while a judge decides if the case should go to trial. The process could take months or years. If found guilty, all seven could face between eight and 25 years in prison.

Luque has repeatedly defended his actions, saying he did his “best” to treat Maradona, the AFP news agency reported.

The death of Maradona, a globally revered football star who was particularly beloved in his native Argentina for leading the national team to its second World Cup triumph in 1986, devastated the South American nation.

Tens of thousands queued to file past his coffin, draped in the Argentinian flag, at the presidential palace in Buenos Aires amid three days of national mourning last year.

He is widely regarded as one of the world’s greatest football players. One Argentinian wrote “God is with God” when Maradona died.

The day after his death, Argentinian mourner Wilson Cisnero told Al Jazeera that “Argentina is Maradona”.

But his fame was not limited to Argentina. Maradona played for Barcelona in the early 1980s and Italian club Napoli, which won its first Italian titles with the Argentinian on its side.

The Indian state of Kerala also declared two days of official mourning for the superstar after he died. Maradona was beloved there, and prawn shells from which he ate during a visit in 2012 were freeze-dried and framed.

Ravindran Veleimbra, owner of the hotel where Maradona stayed during his visit, recalled the day the footballer entered the lobby. “Our god had walked in. He was in front of us,” Veleimbra told AFP in November 2020. 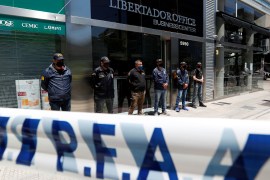 Tearful Leopoldo Luque tells reporters he gave investigators all records of his treatment of the football star. 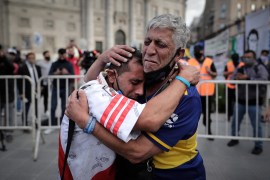 Fans queue in Buenos Aires to pay last respects to Diego Maradona, a national icon who died on Wednesday. 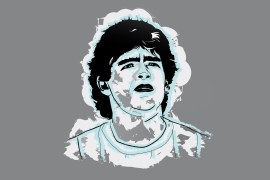 The life and career of Argentine football legend Diego Maradona, who has died at the age of 60.