Buenos Aires, Argentina – The streets of Buenos Aires belong to people like Gabriel Martinez these days, as he searches high and low for scrap pieces of cardboard to turn into cash in the dog days of the pandemic.

His nine-year-old son, Benjamin, dangles his legs over the edge of the cart, as his father returns empty-handed from a pit stop at a gas station.

Martinez has been collecting cardboard for a living since he was 19, and now he is 34.

He lives in the suburbs of the capital city, but he will sleep with his son, in a room they rent in the Buenos Aires depot where he sells his trove of scavenged goods, so that they can start early and repeat tomorrow.

“It’s bad. Because there’s nothing on the streets. We walk for hours and hours, from five in the morning until midnight,” he says. “There are a lot more people trying to survive out here now.”

The roaring metropolis has been muffled again as Argentina tries to tame a second wave of COVID-19 that is worse than the first.

Last year, the country kept contagion relatively low in a strict lockdown that dragged on for months. It allowed the government to bolster its healthcare system, but battered a weak economy and took a harsh emotional toll on society.

Now, following a summer of relaxed restrictions and new COVID variants, the number of infections and deaths have exploded exponentially.

‘The system is collapsing’

Hospital units are overflowing as exhausted healthcare workers plead with the public to heed warnings of distancing and to take precautions. In the province of Buenos Aires, the government has started producing its own oxygen to confront a looming shortage.

Vaccine shipments are arriving, but as with many countries in Latin America, the campaign was slow to get going amid fierce global competition. Some 20 percent of the population have received their first shot.

“The system is collapsing,” Dr Emmanuel Alvarez wrote in an open letter last month he titled “a desperate shout from the conurbano”, the ring of densely populated and mostly working-class municipalities around the capital.

“The collapse is our dead co-workers, the increasingly young patients between 30 and 50 who are intubated and are getting out of hand, the circulating mutant strains, the highest number of hospitalized children,” he wrote.

“They are the ambulances standing at the doors of the clinics waiting for a bed that will not arrive and the oxygen tube that will run out … the dead in the houses, in the streets, the dead who will die without a respirator.”

Three weeks later, on May 19, Argentina recorded a record 39,652 daily cases of COVID-19. Since the beginning of the pandemic, the third-largest country in South America, with a population of 45 million, has recorded more than 3.6 million cases, and more than 75,000 deaths.

“We are dealing with the worst moment since the pandemic began,” President Alberto Fernandez affirmed on May 20 during a national address in which he announced a new shutdown. “The situation is very serious across the country.”

This quarantine is not as severe as the one in 2020. People are allowed to circulate close to their homes from 6am to 6pm to buy essentials or go for a walk. In some jurisdictions, shops and restaurants are open for window service.

But all social gatherings indoors or outdoors have been prohibited – churches, places of entertainment, and school buildings are closed.

Meanwhile, the tension around preserving health and ensuring economic survival is as acute as ever in a country with chronically high inflation – now running at 46 percent annually.

The economy contracted 9.9 percent last year, according to the National Institute of Statistics and Census in Argentina. The number of people living under the poverty line rose to 42 percent.

Mason Helius, 26 and from Venezuela, outlines how the butcher shop he works in on Buenos Aires’s Scalabrini Ortiz Avenue has survived.

The number of employees shrunk from seven to three; his days stretch on for 14 hours, and he bunks in a loft space above the shop. Sales, he estimates, have dropped 50 to 60 percent.

His colleague, Mauricio Quiroz, 48, seethes with disdain. He does not trust the official death toll and thinks the government has failed abysmally. “They should have stabilised the economy,” he says, in between customers who come in to buy bondiola (a meat product) and eggs.

Helius also doubts the severity of the health crisis. “I barely take care of myself. I move around, I work, and I don’t use sanitising alcohol. I haven’t gotten COVID-19. Neither has my wife, or my mom, who lives with us. And I don’t know anyone who has,” he said. “Where are all the dead? It must be happening somewhere I’m not.”

Distrust in the official figures is just one of the sentiments that drove people in cities across Argentina to anti-quarantine protests on May 25 – the day that marks the 1810 revolution that led to the country’s independence.

Shunning facemasks and refusing orders to disperse because of the quarantine, skirmishes broke out with police in some cities and led to arrests.

They were not the first protests of their kind here and were partly fuelled by the right-wing political opposition, gearing up for mid-term elections later this year, and attacking the centre-left Fernandez government about the administration of vaccines and restrictions.

For Angelica Graciano, a teacher in Buenos Aires, the political debate has served to distract from and trivialise the tragedy.

“There are no hospital beds available. We’ve already lost 18 colleagues and there are many more who are hospitalised or in isolation,” says Graciano, 60, and the secretary-general of the largest teachers union in the city of Buenos Aires.

It has been fighting for weeks to return to a virtual model for education as cases skyrocket, something the Fernandez government also sought to impose. But the government of the city of Buenos Aires has maintained that keeping schools open is essential.

“They are using statistics to erase that which is human. A number turns you into something that is anonymous,” says Graciana. “Every life counts and I’m in favour of firm measures of isolation and that the government provide the necessary economic help until we’re all vaccinated. It’s not about confinement – it’s about protecting life.”

Miriam Zambrano, living in the southern province of Chubut, agrees. The retired nurse has seen how people let down their guard in her city of Comodoro Rivadavia as vaccines started to arrive.

The hospitals have been struggling there, too – and children who were in a critical state had to be flown to Buenos Aires for care. Her own seven-year-old granddaughter had the virus. “Poor little one, she still can’t taste chocolate cookies,” says Zambrano.

“No pandemic was around for less than 10 years, so this isn’t for one or two or five years,” she adds. “It’s going to take us at least 10 years, and we have to learn how to take care of each other.” 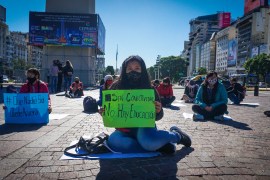 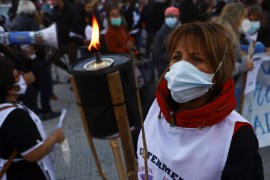 Businesses, schools and social activities will be suspended from Saturday until May 31 as new COVID infections surge. 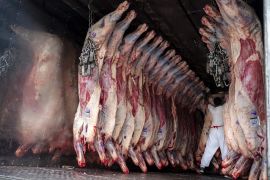 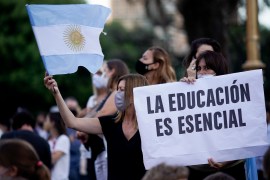