A human rights group has accused Russia and the Syrian government of mounting the “worst string of attacks” on hospitals in Syria since April despite an agreement on “de-escalation” zones.

New York-based Physicians for Human Rights (PHR) said on Wednesday it believes either Russian or Syrian government jets were behind at least five air raids on three hospitals in Syria’s rebel-held Idlib province.

Three facilities came under fire on the same day, September 19, and two of the hospitals were bombarded again separately days later, PHR reported.

“These are the most dramatic, sustained attacks on Syria’s healthcare system since the spring de-escalation agreement in Idlib went into effect,” said the group’s Syria research associate Racha Mouawieh.

An agreement by Russia, Turkey, and Iran to set up de-escalation zones in Syria was signed in May during talks in Kazakhstan’s capital, Astana. But the plan was sharply criticised by the Syrian opposition who rejected Iran’s role as guarantor in any deal.

Physicians for Human Rights and other watchdogs say the Syrian government has intentionally targeted medical workers and facilities throughout the six-year civil war.

The organisation has documented 478 attacks on 323 medical facilities since the start of the war. The vast majority were committed by Russian or Syrian forces.

“What we saw last week was direct hits on hospitals as the start of intensive bombardments of civilian areas,” Marianne Mollman, PHR’s director of research and investigations, told Al Jazeera.

“So what that tells us is that this looks like a strategy to punish the civilian population and take out the hospitals so that healthcare is impossible,” she said.

Following the latest attacks, the UN Security Council met to discuss the humanitarian crisis in Syria on Wednesday.

British and French diplomats described the recent escalation as “unacceptable and appalling”.

UN special envoy Staffan de Mistura said he hopes to convene an eighth round of Syria talks in Geneva no later than early November.

Syrian ambassador to the UN, Bashar al-Jaafari, the government’s chief negotiator, was also present at the Security Council chamber.

“I am calling on both sides to assess the situation with realism and responsibility to the people of Syria and to prepare seriously to participate in the Geneva talks,” de Mistura said in New York.

De Mistura has already hosted seven rounds of largely unsuccessful talks in Geneva, with the fate of Syrian President Bashar al-Assad one of the main obstacles to progress.

Al Jazeera’s James Bays, reporting from the UN headquarters, said while de Mistura did put pressure on the Syrian government, “his toughest words were reserved for the opposition”. 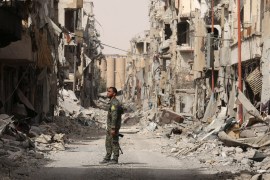