Germany is going to the polls on Sunday for the country’s federal elections, with long-serving Chancellor Angela Merkel looking all but certain to win a historic fourth term in office.

The poll is also expected to see the right-wing Alternative for Germany (AfD) entering parliament for the first time.

Polls opened at 8am (06:00 GMT) and first projections are expected when the polls close at 6pm.

“Voting is a civic duty. Go and vote!” Steinmeier wrote in an opinion piece published in the Bild am Sonntag Sunday newspaper.

“Every vote counts – your vote counts,” Steinmeier asserted. “People who don’t vote allow others to decide the future of our country.”

Opinion polls suggest Merkel and her party are heading for a clear win, which would gift Merkel a historic fourth term.

Al Jazeera’s Laurence Lee, reporting from Berlin, said that Merkel is now regarded as the “mother of 21st-century Germany”.

“There is no other European politician who could remotely match her in terms of her longevity, her credibility among her own people,” Lee said.

“It is impossible to imagine a conservative politician or even one from the left in any other European country taking in a million refugees and surviving politically.”

For Germany and the European Union, Lee added, Merkel is the most stabilising influence that can be imagined.

Merkel’s Christian Democrats (CDU) can hope for a narrow majority with the pro-business Free Democrats (FDP), or the environmentalist Greens, or an untried coalition with both.

Alternatively, the CDU will continue its so-called grand coalition of the biggest parties with the centre-left Social Democratic Party (SPD), which has seen its support erode to a historic low over the past decade.

Martin Schulz, the SPD candidate and Merkel’s main contender, is stuck in polls of about 20 percent support and has been unable to make any headway against the CDU.

The AfD is expected to take at least 60 parliamentary seats in the election, after having narrowly failed to clear the five percent hurdle to enter parliament in 2013.

It would be the first time in 60 years that a far-right party be represented in the Bundestag.

AfD has been saying it will press for Merkel to be “severely punished” for opening the door to refugees and migrants, and attacked Islam by saying it “does not belong in Germany”.

Some 61.5 million people are eligible to vote in Germany. Turnout is expected to be higher than the 71.5 percent of voters who turned up at the polls at the last election four years ago. 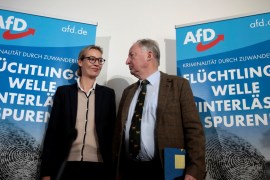 AfD, the first far-right party set to enter German parliament in more than half a century, attacks Islam and refugees. 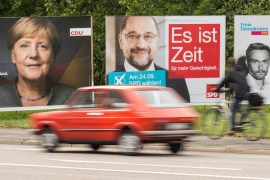 What Germany’s refugees think about the elections

“This election will affect my future … Germany is now my home. I speak German better than my mother tongue.”