Almost 50 refugees are feared dead after their rubber boat sank in the Alboran Sea in the Mediterranean, Spanish coastguards said.

Three “exhausted and disorientated” people were rescued from the deflated rubber boat on Tuesday that is believed to have left Morocco with 52 people aboard.

The “half-sunk” boat was spotted around 50km southwest of Spain’s Alboran Island, which lies in the westernmost portion of the Mediterranean.

When asked if the 49 people left unaccounted drowned, a spokeswoman for the coastguards told AFP news agency: “We suppose.”

Rescue workers were searching for survivors in the water near the Spanish island.

The three rescued men, aged 17 to 25 from sub-Saharan Africa, “explained that more than 50 people were on board the rubber boat which had been drifting for several days after leaving the northern coast of Morocco”, the coastguards said in a statement.

The three people were taken to hospital in Almeria in southern Spain after suffering from dehydration.

If the missing 49 are confirmed dead, this will be the deadliest sea crossing in the western part of the Mediterranean this year.

So far, 60 refugees and migrants have died trying to cross the waters to Spain from North Africa since January, according to the International Organization for Migration (IOM).

The UN’s migration agency said 6,464 people reached Spain after crossing the Mediterranean between January 1 and June 25 this year.

In total, at least 2,247 people have died or are missing after trying to cross the sea into Europe via Spain, Italy or Greece this year, the IOM said. 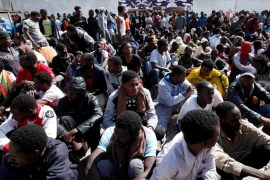 Algeria to give legal status to African migrants 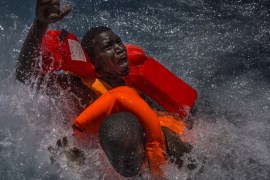 16-year-old Gambian says he’s the only survivor after boat packed with 147 Africans goes down in the Mediterranean.