At least nine people, including an election candidate, have been killed in the past 24 hours in Venezuela as the country voted for an all-powerful new legislative body tasked with reforming the country’s constitution.

Counting of ballots across Venezuela began on Sunday night after the voting was extended by an hour. Preliminary results were expected before the end of the day.

Anti-Maduro activists wearing hoods or masks erected barricades on roads and scuffles broke out with security forces who moved in quickly to disperse the demonstrators.

The president, elected in 2013, has faced months of protests for presiding over a debilitating economic crisis that has seen high inflation rate and shortages of food and other basic amenities.

He has pressed ahead with the vote to create the all-powerful constituent assembly or temporary parliament despite US sanctions and months of violence which has claimed the lives of around 120 people.

The US has condemned the violence, urging governments in “the region and around the world to take strong action to hold accountable those who undermine democracy, deny human rights”.

READ MORE: All you need to know about today’s vote in Venezuela

Al Jazeera’s Lucia Newman, reporting from the capital Caracas, said that it was a “sad and bloody day in Venezuela”. She said that half a dozen protesters with bullet wounds were rushed to neighbouring Colombia for treatment.

Maduro has accused right-wing governments of trying to sabotage “21st-century socialism” created by his predecessor, the late Hugo Chavez. Several regional governments, including the United States, have voiced opposition to the controversial election.

The US envoy to the UN, Nikki Halley, on Sunday called the election a “sham” and “step toward dictatorship”, adding that the US won’t accept “illegitimate government”.

“The ’emperor’ Donald Trump wanted to halt the Venezuelan people’s right to vote,” said Maduro, as he voted at 6am in a low-income area of Caracas.

“A new era of combat will begin. We’re going all out with this Constituent Assembly.”

Supporters of “Chavismo,” the movement founded by Chavez, said they wanted to halt the unrest.

“The [opposition] wants deaths and roadblocks and the government wants peace,” said Olga Blanco, 50, voting for candidates to the assembly at a school in Caracas.

Maduro is gambling his four-year rule on the 545-member citizens’ Constituent Assembly empowered to dissolve the opposition-controlled congress and change laws as it reforms the nation’s constitution.

The voting started at 6am local time with almost 20 million Venezuelans registered to cast their ballots, according to Telesur, a pro-government pan-Latin American media network.

The opposition called for new protests on Monday and Wednesday against the inauguration of the powerful Constituent Assembly (CA).

“We do not recognise this fraudulent process,” senior opposition leader Henrique Capriles said on Sunday at the close of the controversial election, which was marred by violence.

Capriles spoke of a “black day” and blamed what he termed President Maduro’s “sick ambition”.

To show the massive scale of public anger, the opposition earlier this month organised an unofficial referendum over Maduro’s plan. More than seven million voters overwhelmingly rejected the constituent assembly and voted in favour of early elections.

The opposition’s bid last year to hold a recall referendum against Maduro was rejected, regional elections have been postponed and the president has repeatedly ignored the opposition-controlled congress.

READ MORE: All you need to know about today’s controversial vote

Turnout will be key to determining the legitimacy of the election. But that will be difficult to ascertain.

“I am at a polling station in Caracas and there is nobody here. There were a lot more people in the morning, but since then there’ve been just a few people dropping by,” Al Jazeera’s Newman said.

The Al Jazeera correspondent said that it was very difficult to get the exact figures on polling percentage. “The opposition claims only 15 percent went out to vote while the government is claiming it to be a major success,” she said.

“President of the ruling Socialist party said it was historic and the biggest turnout ever, but the opposition members are not even showing at the polling centres.”

Javier Farje, a Latin America political analyst, said that Maduro government is not going to rewrite the Constitution but they are going to “introduce nine reforms in the current constitution”.

“I believe the only solution is to restart the dialogue that was suspended in December 2016 when the opposition abandoned the dialogue because they disagreed with the government,” he told Al Jazeera.

“They have to go back to negotiating table. Constituent Assembly should not be seen as an obstacle for that. It is not going to replace the current National Assembly, let’s make it clear. The National Assemby can still do its job.” 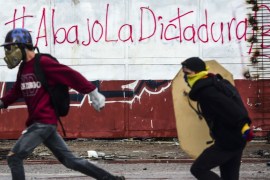 Opposition decries election to decide upon body tasked with reforming constitution as a power grab by President Maduro.