Istanbul, Turkey – Turkish President Recep Tayyip Erdogan has rallied hundreds of thousands of supporters in a gathering in Istanbul, days before a milestone referendum that seeks to grant his office extended powers.

If adopted, constitutional changes proposed in the April 16 referendum will transform Turkey from a parliamentary system to an executive presidency, significantly expanding the powers of the presidential office.

“At this point it is not enough for us to adopt the constitutional changes. We have a much bigger responsibility,” Erdogan told cheering supporters.

“Istanbul should say ‘Yes’ in such a way that the hearts of all who look at the Turkish nation in a malicious way should tremble, starting from the ones who defiled this holy city 99 years ago,” he said, referring to the war fought against occupying European powers after World War I.

Turkish officials have been engaged in a war of words with Germany and the Netherlands since last month after the two European Union member states barred Turkish ministers from rallying at referendum campaign gatherings within their borders.

Erdogan and his Justice and Development Party (AK Party) say the new system will make Turkey more efficient and stable.

The two largest opposition parties and other critics argue that the amendments will give too much power to one individual, undermining separation of powers in the government.

Erdogan said at the rally that Turkey’s current system has created many short-lived governments, adding that government changes have histrorically been far more frequent in Turkey than Western countries.

“The fact that we had 48 governments is not the expression of the strength of our democracy, but the instability of it,” he said.

The AK Party has been carrying out a massive campaign to convince Turks to vote for the constitutional changes.

The party has been ruling Turkey for 15 years after taking over a country in political crisis and economic downturn in 2002.

Erdogan was elected president in 2015, becoming the first Turkish president to be elected by popular vote in line with previous constitutional amendments passed in 2010.

“Erdogan is our hero. He stands tall for his country and people,” supporter Mehmet Koylu told Al Jazeera.

“The changes will make Turkey stronger and make the government serve us better,” the 54-year-old merchant said, without getting into the specifics of the amendments.

Hatice Ozdemir, another supporter, said that the new system will make Turkey less fragile in the face of threats.

“There are powers who want divide this country. We will be more secure against terrorist groups and the West,” the 23-year-old student told Al Jazeera.

Deadly bomb attacks claimed by, or blamed on, Kurdish fighters’ groups and the Islamic State of Iraq and the Levant (ISIL, also known as ISIS) have killed hundreds of security forces and civilians in recent years.

Security concerns were further heightened when members of the Turkish army dramatically tried to topple the government last July until they faced strong resistance from people and the rest of the army.

Turkey accuses Fethullah Gulen, a religious leader who lives in self-imposed exile in the US, of orchestrating the coup attempt, which killed around 300 and led to massive purges and arrests within state institutions.

The government says the purges are aimed at removing Gulen supporters from the institutions. 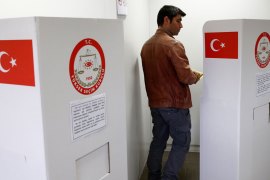