North Korea has warned its army is on “maximum alert” after the US vice president visited the heavily militarised border between the two Koreas and reiterated Washington’s position that “all options are on the table” in dealing with Pyongyang.

“If we notice any sign of assault on our sovereignty, our army will launch merciless military strikes against the US aggressors, wherever they may exist, from the remote US lands to the American military bases on the Korean peninsula, such as those of Japan and elsewhere.”

Sin also said that the six-nation talks aiming to make the Korean peninsula free of nuclear weapons were “throttled at birth”.

“The nuclear weapon in our possession is not illusion; it is not a commodity that may be traded for American dollars – nor is it for sale. So it cannot be put on the negotiating table with the aim to rip it off,” he said.

Tensions between Pyongyang and Washington have soared in recent weeks as a series of North Korean missile tests have wrought ever-more bellicose warnings from Donald Trump‘s administration.

On Monday, US Vice President Mike Pence – visiting the world’s most heavily militarised border that divides the two Koreas – hinted that military options against the North have not been ruled out.

“The people of North Korea, the military of North Korea should not mistake the resolve of the United States of America to stand with our allies,” Pence said, adding: “The era of strategic patience is over.”

“All options are on the table as we continue to stand shoulder to shoulder with the people of South Korea,” he said from the village of Panmunjom, inside the Demilitarised Zone (DMZ).

On Sunday, Pyongyang conducted its latest missile test, which the US and South Korea said crashed in failure only a few seconds after launch.

The Trump administration has indicated it will not allow North Korea to develop an intercontinental ballistic missile capable of delivering a nuclear warhead to the western United States.

Pyongyang insists that it needs a powerful arsenal – including atomic weapons – to protect itself from what it says is the ever-present threat of invasion by hostile US forces.

Speaking to Al Jazeera from Seoul, Korea specialist and author Donald Kirk noted that the rhetoric between the rivals continues to escalate and a “violent confrontation” was a real possibility.

READ MORE – North Korea: ‘Whatever comes, we will handle it’

Tensions between Pyongyang and Washington go back to the 1950-53 Korean War, which ended in an armistice, not a peace treaty. But the heat has been rising rapidly since Trump took office in January.

The USS Carl Vinson aircraft carrier has been diverted back to the waters off the Korean peninsula after heading for Australia, and US satellite imagery suggests that the North could conduct another underground nuclear test at any time. 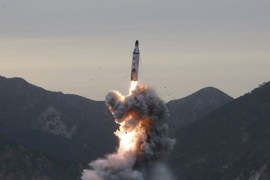 Defiant Pyongyang fires missile despite US warnings, but projectile reportedly blows up on take-off in failure.