Like hundreds of thousands of her compatriots, Anna Lachowska left her native Poland shortly after its accession to the European Union, in the hope of finding opportunity elsewhere in the bloc.

The journey first took her to Ireland, then the Czech Republic, and later to the UK, where she spent a decade living in London.

It was there that she underwent a spiritual transformation, leaving the Christianity of her upbringing behind for a faith few in her native land knew much about.

“Islam showed me God like I had always felt I seen,” she told Al Jazeera, describing how the decision prompted a reaction of disappointment from her mother.

“Whenever she is on the phone with some relatives from Poland, if they say something ‘anti-Islamic’, she bravely argues with them, defends Islam, defends my choice, alhamdulillah (thank God).”

Lachowska’s relatives are not alone in their negative opinion of Islam, and the scale of anti-Muslim feeling in the country was on display at Saturday’s Polish independence day march, which drew around 60,000 people, many of them from far-right groups.

Inside the trojan horse was a stereotyped caricature of a Middle Eastern man with a long nose, wearing a suicide vest and carrying a banner which read “I’m a refugee.”

Fears of Islam and an influx of refugees to Poland, similar to what neighbouring EU countries experienced, have been amplified by politicians and sections of the media, according to Konrad Pedziwiatr of the Cracow University of Economics.

“Most of the information people get about Islam and Muslims comes from the media, and what has been happening over the last few years especially is this tendency to lump together the issues of terrorism, the refugee crisis, and Islam,” he said.

“You always had politicians who had strong opinions against Islam, but the refugee crisis helped jack the cause and helped the Law and Justice party come to power.”

Poland’s largest party came to power in 2015 on a platform of restoring Polish pride and keeping refugees out of the country.

in a super negative way.”]

Pedziwiatr explained that the rise of Islamophobia in political life had been in tandem with increasingly unfavourable coverage of Muslims in the media, especially state media outlets.

“Whenever the issue of Islam and Muslims is there, it’s always (represented) in a super negative way,” he said.

The combined effect of vilified political and media discourse on Islam, he argued, has brought about a “banalisation” of Islamophobia and led to many Poles holding inaccurate perceptions about the Muslim community.

Muslims make up just 0.1 percent of the Polish population, or around 35,000 people, including indigenous Polish Muslims, such as the Tatars, converts, and immigrants from all over the world.

However, the average citizen believes the number is much higher.

“Poles hugely overestimate the size of the Muslim community, the average that people think is seven percent, which is ridiculous because it means over two and a half million people,” Pedziwiatr said, explaining that such perceptions were of “the Polish fear of Islam and Muslims”.

While Poland’s Muslim population is small, Islam has a presence there dating back to at least the Medieval era.

The Lipka Tatars are a Muslim community descended from Mongol conquerors who later served as soldiers for a succession of Polish monarchs.

Though initially thought to have numbered in the tens of thousands, the community now has just over 10,000 members, with just under 2,000 remaining in Poland, due to border changes and assimilation into the wider Polish community.

York University academic Kasia Narkowicz told Al Jazeera that Islamophobia had been brewing in Poland for years, in keeping “with the broader global trend of anti-Muslim sentiments”.

She argued that in that atmosphere the historic contributions made by the Lipkas were largely forgotten.

“When I did research on Islamophobia in Poland in 2011… people spoke about the 1683 Battle of Vienna, which they perceived as a key event where Poles stopped Muslims at the gates of Europe,” she said.

“Now they are using another battle, the 1571 Battle of Lepanto, as example of Polish resistance to Islam that saved Europe from ‘Islamisation’.

“What many … do not realise is that many of the soldiers fighting for Poland at that time were indeed the Tatars, Poland’s Muslim minority.”

Narkowicz was eager to stress that Poland was once home to more Muslims than it was likely to have in the near future.

“Muslims in Poland have practised their religion freely for hundreds of years without any issues … many Poles who are now worried about a Muslim invasion are completely unaware of [this history].”

For Anna Lachowska, while the rise of Islamophobia in her native land is worrying, it is important to put the trend into perspective.

Now a resident of France, she described how she was asked to remove her headscarf while waiting in line for a travel pass, something she said would not have happened in Poland.

“I am a proud holder of a Polish passport with a hijab photo and it wasn’t a problem to make it,” she said.

“It’s not that I am fixated about the scarf, but I cannot agree with the French fixation on this ban.

“Poland is better, more open, more respectful in this matter.” 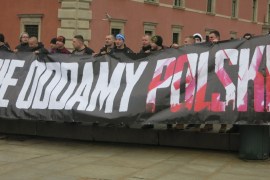