That’s what Tarana Burke wishes she had said nearly a decade ago, when a young girl who had survived sexual violence was trying to connect with her over the pain she was experiencing.

A survivor of sexual violence herself, Burke said she wasn’t equipped to deal with what the young girl was telling her at the time.

“That sat with me for the longest time.”

That’s why Burke – a public speaker and community organiser based in New York – named the movement she founded about 10 years ago to support and amplify the voices of survivors of sexual violence, assault and abuse, “Me too”.

This week, women from around the world began using #MeToo on social media to share their own experiences with sexual harassment and sexual assault.

The posts were sparked by news reports that revealed how Hollywood super-producer Harvey Weinstein had allegedly sexually assaulted and harassed numerous women over several years.

Weinstein, who has denied many of the accusations, was fired as cochairman of The Weinstein Company, and forced to resign from the company’s board of directors this week.

His behaviour was reportedly an open secret in Hollywood, with high-profile actors, journalists and others quietly warning each other about being alone with the prominent producer for fear of sexual abuse.

The public revelations regarding Weinstein have raised other important questions about sexual harassment and assault, especially in the workplace.

Many are asking how Weinstein was able to sustain his alleged abuse for so long, and how prevalent it is for men in positions of power to wield that power in abusive ways.

“Unfortunately, this kind of sexual predatory behaviour is a lot more common than most of us think it is,” said Sheela Raja, a clinical psychologist at the University of Illinois at Chicago and an author of books on how sexual abuse survivors can overcome trauma.

“It’s a positive thing that we are now having some of these larger discussions,” she said.

“Maybe this will be a watershed moment.”

Every year, an average of 321,500 people above the age of 12 are raped or sexually assaulted in the US, according to the anti-sexual violence organisation RAINN.

A vast majority are women and girls, and many survivors experience post-traumatic stress disorder or have suicidal thoughts tied to their assault.

Approximately one in five (22 percent) Black women will be raped in her lifetime in the US, according to a 2010 survey.

More than a quarter (26.9 percent) of women who identify as American Indian or Alaska Native will also be raped, the survey found.

In Canada, one in three women will experience sexual violence in her lifetime, according to the Native Women’s Association of Canada.

More than half (54 percent) of aboriginal women in Canada reported severe forms of family violence, including sexual assault, compared with 37 percent of non-aboriginal women.

Accounts of sexual violence are common, and they aren’t confined to the film or television industry.

Fox News’ Roger Ailes and Bill O’Reilly were recently forced to resign after they were accused of sexually harassing female colleagues; the vice president of the University of Southern California stepped down after an investigation was launched into his treatment of women; innumerable reports have exposed the toxic culture in Silicon Valley and what has been dubbed a “sexual-harassment crisis” in the tech industry there.

Whether you know it or not, you do know a survivor of sexual harassment and sexual violence, and we all need to operate based on that premise instead of necessarily forcing people to come forward with all of their painful stories.

Earlier this week, US Olympic gymnast McKayla Maroney published an open letter on Twitter saying that she had been repeatedly sexually abused by a team doctor since she was 13 years old.

“People should know that this is not just happening in Hollywood. This is happening everywhere. Wherever there is a position of power, there seems to be potential for abuse,” Maroney wrote.

The will to make excuses for abusers, while disbelieving survivors’ accounts of that abuse, is also common.

“There’s a lot of people complicit for this kind of abuse to continue, and it takes a lot of really, really brave survivors to come forward and talk about their story to really help change the culture on these things,” the University of Illinois at Chicago’s Raja told Al Jazeera.

However women shouldn’t feel like the onus is solely on them to share their stories of abuse again and again, since this can be re-traumatising, Raja said.

“Whether you know it or not, you do know a survivor of sexual harassment and sexual violence, and we all need to operate based on that premise instead of necessarily forcing people to come forward with all of their painful stories,” she said.

Educating men so they can recognise situations that are making women uncomfortable, and how they can intervene, is important, as is providing education in workplaces and schools.

“Now we need men to step up and say, ‘How are we going to participate in changing the culture around some of these things?'” Raja said.

‘Bigger than a moment in time’

Burke said she understands the impetus for survivors to share stories of sexual violence or harassment on social media, and to demonstrate the prevalence of the problem.

The hashtag #BeenRapedNeverReported drew attention to the issue of sexual violence after Canadian media presenter Jian Ghomeshi was accused of sexually assaulting multiple women in 2014.

But reading social media posts about this type of trauma has been triggering for many people, Me Too’s Burke said.

She added that she hopes the conversation can shift from focusing on the scope of the problem to finding out what types of support survivors need to begin to heal.

“What happens when these people open themselves up? What happens when they start talking about things that they’ve possibly never talked about in their lives? Where do you point them, what direction do they go in, how do you support them?” Burke asked.

“This is bigger than a moment in time,” she continued.

“I don’t ever try to define what healing looks like for anybody. But I think when we start sharing stories of healing … it changes the conversation.” 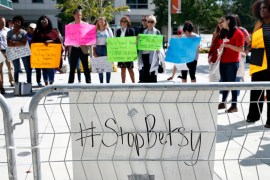 US colleges under the spectre of sexual assault