South Korea rolled out its latest military machinery on Thursday to mark Armed Forces Day as tensions with its northern neighbour continue to rise.

Among the weaponry on display at the ceremony attended by thousands were Hyunmoo-2 ballistic missiles and Hyunmoo-3 cruise missiles.

The latest Hyunmoo-2C missile, with a range of 800km, was shown publicly for the first time.

Tensions on the Korean Peninsula have escalated in recent weeks as North Korea’s leader Kim Jong-un and US President Donald Trump exchanged threats and insults over the North’s nuclear and missile development programme.

South Korea’s national security adviser Chung Eui-yong said on Thursday he expects North Korea to engage in more provocative acts early next month with the anniversary of the founding of the communist party.

The US and South Korea are technically still at war with North Korea because the 1950-53 Korean War ended with a truce, not a peace treaty.

The South’s Armed Forces Day usually falls on October 1 and commemorates the day in 1950 when its forces broke through the 38th parallel border during the war against invading North Korea.

However, this year’s ceremony was held earlier because of national holidays taking place next week. 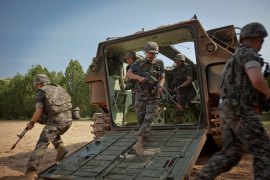