Seoul, South Korea – On a warm spring Sunday morning, the rows of pews inside Seoul Anglican Cathedral were nearly full with congregants singing a traditional hymn accompanied by a blaring organ.

Among the attendees was Park Hyun-jung, a simply dressed woman in her early 30s, currently taking time away from her career to raise her children, aged two and six.

Park comes from a devout Anglican family and attended church regularly while growing up in Seoul. As she entered adulthood and the challenges of completing university, finding a job and marrying came to dominate her schedule, she started going to church less often. She now only goes two or three times a year.

“I’m so busy trying to raise kids and manage our household. I can’t find time to do everything,” Park said.

Her trajectory of straying from religion in early adulthood is increasingly common among South Koreans, and is reflective of a national trend towards increasing secularism, particularly among young people.

Experts say that young South Koreans are too wrapped up in a demanding education system and job market to spend much time on religious activities.

In many South Korean cities, there are more churches than convenience stores. Around 20 percent of South Koreans identify as Protestant, the largest group in the country, followed by 15 percent who identify as Buddhists, and nearly eight percent as Catholics.

The abundance of churches is a legacy of how people turned to organised religion, mostly brought by US missionaries, for structure and guidance after the 1950-53 Korean War devastated the country and tore apart families. But according to Statistics Korea, a government body, the percentage of South Koreans identifying as having no religion rose from 47 percent in 2005 to 56 percent in 2015. This falling religiosity is especially pronounced among young adults: a poll the same year by Gallup Korea found 31 percent of South Koreans in their 20s identifying as religious, down from 46 percent 10 years earlier.

When Park does attend service, she goes to Seoul Cathedral, a 126-year-old Anglican church located on a leafy property in the centre of Seoul.

Seoul Anglican Cathedral is one of a few houses of worship that, facing down the possibility of a slide into irrelevance, are making efforts to retain their young congregants, updating teachings and holding events modelled on typical TV talk shows, where instead of just discussing scripture, young people can speak openly about personal or spiritual matters and seek support from peers and church leaders.

Some have pointed to smartphones as one thing distracting young South Koreans from religious observance. With this in mind, some young South Koreans last year organised a joint prayer event they called “Uprising“, which aimed to get young people off their phones and into an in-person prayer gathering.

Other churches have accepted the primacy of smartphones in how young people access information. SaRang Church, one of South Korea’s biggest, developed a smartphone app with a searchable Bible.

Joo says the church is constantly working to update its teachings to be relevant for young people, and to hold gatherings specifically geared to them. Joo argues that as many long-time members age and become less active in church activities; for the church to remain vibrant, it must continuously be attracting new and younger congregants.

Joo drew inspiration from Theology on Tap, a practice founded in the United States, whereby churches hold lectures and discussions in informal settings, usually restaurants or bars (the “tap” in the name comes from the lever used to pour draught beer).

On the evening of the third Thursday of every month, Joo organises a gathering at a coffee shop, where anyone is welcome, from church congregants and their friends to curious atheists, to discuss not just theology, but personal concerns, as well as social and political issues. Usually, around 20 people attend and participate in spirited conversations, or remain quiet with their beverage, if that is what they prefer.

The church also holds a 13-week educational programme on the basics of the Christian tradition and the church’s mission for new members, roughly two-thirds of whom are in their 20s and 30s, Joo says.

On the last Sunday of every month, he holds a special mass only for young people, where he invites the participants up to the altar, the most sacred space in the church, to receive the Eucharist. During that service, Joo gives a sermon without a lectern. He says he does this to undermine any sense of hierarchy within the church.

“I choose to let the younger generation into this most holy place because they are the most important people for the future of our church,” Joo said. He says that these efforts have made it possible for his church to buck the trend of falling numbers of young congregants.

Francis Jae-ryong Song, a professor at Kyung Hee University in Seoul, has conducted research into the phenomenon of churches attempting to retain young congregants, and argues that churches, like so much else in South Korea, are a competitive ecosystem.

Similar to how businesses compete for customers, churches compete to attract congregants, and larger numbers of worshippers are taken as indicators of health in a church.

Song says that so far, efforts to retain young churchgoers have not been highly successful, as they have not addressed core issues that many young Koreans find unappealing.

“Many Korean churches have authoritarian structures and there is no interactive or democratic communication structure. This prevents young people from participating actively in the church decision-making process,” Song said.

Song adds that the types of live conversation events some churches are using are vital in allowing young members to express themselves in a language they are comfortable using.

In his research, Song described a “mismatch of language of faith between generations” where church leaders still used old-fashioned manners of speech which alienate young people.

Experts say rising youth unemployment, which OECD data shows is now at its highest point in South Korea since 2000, and young people feeling beset by problems to which religion does not provide any direct solutions, are major factors in the falling numbers of young people who identify as religious.

South Korea has a time-consuming process for young job seekers. Applicants often need to sit for tests and fill out elaborate forms. According to data from the Korea Employment Information Service, South Koreans in their 20s spend an average of 111 days looking before finding a job.

“Young people nowadays are caught in this long cycle of studying hard to get into university, then having to get a good job. They also have technology and many options for leisure activities. All these things have brought young people away from churches,” said Andrew Eungi Kim, a professor at Korea University in Seoul.

Kim argues that South Koreans are becoming less trusting of hierarchical institutions and that turning away from religion is part of this.

“Young South Koreans are far better educated than their parents and are more likely to be sceptical of the claims religious leaders make,” Kim said.

Furthermore, as unemployment can carry a heavy social stigma in South Korea, unemployed young people might avoid social settings, such as the church, where they are expected to mingle.

Joo says he regularly counsels young church members, many of whom are anxious about their careers or finances.

“I don’t tell them what is wrong or what is right in their life, I just listen to them and try to educate them about Christian tradition,” he said.

Nevertheless, more South Koreans are feeling like churches, and religion generally, don’t provide answers to their most pressing needs.

“We can’t offer practical assistance when it comes to jobs or financial hardships. All we can do is provide emotional consolation and try to encourage harmony,” Joo added.

Kim Hyun-ah, 27, took time away from her own search for a job at a large conglomerate to attend the Sunday service at Seoul Anglican Cathedral.

“I just come here because it’s an open-minded church. I like the atmosphere,” she said. Kim says she finds occasional church attendance a boost to her spirits during a challenging time.

After the service she said she was planning to move to a nearby coffee shop to resume her online job search, saying: “It’s good to come here sometimes, but finding a job is my real occupation. And going to church won’t help me with that.” 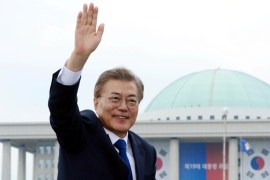 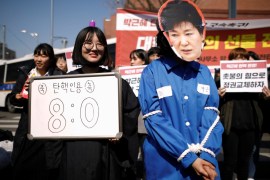