I was there with Montha Chum. Her brother, Chamroeun Phan, was detained a year ago by US immigration officials. He was on the verge of being deported to Cambodia because in 2009 he had broken three windows at a bar. I was documenting her family’s fight to keep him in the US.

I think people question his American-ness because of the colour of his skin and the way he looks. But he's an American. He works full-time, he takes care of his family, he pays taxes just like any American.

As people celebrated around us, Montha was somber. It’s been a tough year for immigrants in the US. The so-called “Muslim ban” is in full swing, raids are being carried out against undocumented migrants and there is talk of building a wall along the Mexican border.

I had moved to the US just weeks before, paranoid that immigration officials would refuse me entry because of my numerous reporting trips to Afghanistan. It wasn’t a good time to be perceived as an outsider here.

“Considering everything that’s happening, I absolutely don’t feel American,” Montha said in her Midwestern twang. “But I am an American. My brother’s an American. That’s all we know.”

Montha’s family came to the US as refugees when she and Chamroeun were babies. They were fleeing the genocidal reign of the Communist Khmer Rouge in Cambodia.

Once here, they didn’t apply for citizenship because they say they never realised they had to.

Now, more than 30 years later, the US government is trying to deport Chamroeun to a country he’s never been to. According to the government, he’s a Cambodian national who needs to be deported because he committed a crime.

“My brother is not Cambodian,” said Montha. “I mean, yes, he is Cambodian ethnically because that’s who we are, but at heart we are American.”

‘Yeah, but where are you really from?’

Even after three decades in the US, Montha still feels the need to remind people that she and her family belong here.

It’s a familiar feeling. My family immigrated to Australia from India when I was eight. We weren’t escaping war, but we did want to build a better future.

When we arrived in the 1980s, immigration in Australia was all about ‘assimilation’. It’s what was casually expected of us, and we obliged because we were grateful.

They said it would help us belong. What they really meant was that if we wanted to be accepted, we had to hide everything that made us different – our language, our history, our food, our face. Like tens of thousands before us, we assimilated.

Across the US, immigrants like Montha got the same deal. But no matter how many football games we watch, or how flawless our accents are, we are regularly reminded that we don’t belong.

“This is happening because we’re different,” said Montha, when I asked her why the US government wanted to deport her brother.

Officially, Chamroeun is being deported because he committed a felony and he’s not a US citizen. But to Montha and her family, it’s yet another sign that as immigrants, they are not equal.

“I think people question his American-ness because of the colour of his skin and the way he looks,” said Montha. “But he’s an American. He works full-time, he takes care of his family, he pays taxes just like any American.”

When people ask about my nationality, I always say “Australian”. And then they ask, “Yeah, but where are you really from?”

The question doesn’t offend me, but it does make me think: What makes you a citizen? Is it by birth? Is it a document? Is it what you feel?

‘We’re here because they wanted us’

Chamroeun has never been to Cambodia because he was born in a Thai refugee camp. He loves ice fishing in the Minnesota winter and wears baseball caps. After living in the US his whole life, is he not American?

I have spent more time out of Australia now than living in it. Am I still Australian?

For immigrants, the question of nationality is complicated. Not because we don’t know who we are, but because other people don’t understand that identity isn’t singular, and that it isn’t written on our faces.

“My husband is a natural-born citizen and so he’s an American, right?” asked Montha. “But people still treat him like he’s not because he looks different.”

“My daughter, she was 10 years old at the time … Somebody drives by and tells her to go back to where she came from. She was born here. There’s so much ignorance in this country.”

Immigrants are responsible for some of this ignorance. We’re too eager to prove our worth and too grateful to our new country for letting us in. What did we have to offer?

We didn’t have money, and they didn’t want the culture that we brought with us. But we have to remember that our countries chose us, as much as we chose them. We’re here because they wanted us.

It’s something that Montha has been thinking about, too.

“I don’t want to say that we’re not thankful or blessed that we’re here, because we are. But we also know that America has gained so much from our people.” 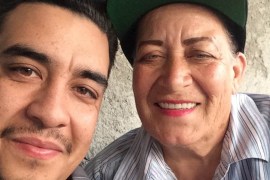 Three deported mothers and their US-born children share their stories of separation.