In recent weeks, the Turkish-led Operation Euphrates Shield has made significant progress against ISIL around the city of Al Bab in northern Syria. Russia, a key ally during the operation, has provided Turkey with military and diplomatic support.

The takeover of Al Bab would effectively prevent Kurdish forces from establishing a land corridor between the two territories they control in northern Syria – one of the main goals of Turkey’s military operation.

It would also provide Turkey with an important strategic advantage in possible operations against the ISIL, the Islamic State of Iraq and the Levant, which is also known as ISIS, and Kurdish forces. But analysts say that Ankara’s plans to push further east and south might face serious diplomatic challenges.

On Sunday during a press conference, President Recep Tayyip Erdogan announced that Turkish troops had entered Al Bab’s city centre and that it was only “a matter of time” before they took it over completely.

According to Can Kasapoglu, a defence analyst at the Centre for Economics and Foreign Policy Studies in Istanbul, Euphrates Shield forces have already broken the first line of ISIL’s defence. However, it will take a few weeks for them to take full control of Al Bab, he says.

I think it's fair to assume that Turkish reluctance to get further involved in the Aleppo fight was linked to its understanding with Russia regarding Euphrates Shield.

“As the Turkish operations go deeper into [fighting] street-by-street, […] there will be more intensified, nastier defence by the ISIS elements,” said Kasapoglu. “We always see this. We saw this in Iraq, we saw this in Ramadi. When ISIS feel that the tide is turning against them they go apocalyptic, but it cannot stop the operation.”

Turkey launched Operation Euphrates Shield in August 2016 with a coalition of Syrian Arab and Turkmen forces, backed by a few hundred Turkish troops. As fighting progressed, Ankara had to send reinforcements and currently, according to Kasapoglu, Turkish troops on the ground in northern Syria are in the thousands.

The Operation Euphrates Shield forces started their advance on Al Bab in November 2016. In early February, ISIL was completely encircled after armed forces fighting for Bashar al-Assad’s regime cut off its last remaining supply route connecting it to the rest of its territories south and east of Al Bab.

This positioned regime forces in close proximity to FSA factions, and according to Kasapoglu, that resulted in minor clashes.

Osama al-Koshak, an independent Syrian researcher and activist, says there is very little risk of more serious clashes happening between FSA affiliates and regime forces in Al Bab. He added that there has been agreement between Turkey and Russia on Syrian regime forces halting their progress at the village of Tadif, just 2km southeast of Al Bab.

Despite these issues, Koshak says Russian-Turkish cooperation in northern Syria has been growing and will continue to grow, as Turkey’s western allies take a step back.

“This pushed Turkey to consider Russia a more suitable coalition partner in the pursuit of its interests. Russia offered air support against ISIL in Northern Syria, as the US retreated,” explains Koshak.

According to Noah Bonsey, International Crisis Group’s senior analyst on Syria, Russia’s support of Turkey’s operation in northern Syria is part of its strategy to “cash in” politically on the significant military progress it has made and also prevent overstretching of its military capabilities by seeking to de-escalate the conflict in certain places.

Aleppo could also have been part of a deal between Turkey and Russia on Al Bab.

“There are steps that Turkey could have taken to improve the rebel defences of Aleppo that it did not take,” says Bonsey. “I think it’s fair to assume that Turkish reluctance to get further involved in the Aleppo fight was linked to its understanding with Russia regarding Euphrates Shield.”

OPINION: The FSA’s demands ahead of Geneva

During Monday’s press conference, Erdogan announced that the next goals for Operation Euphrates Shield are Manbij and Raqqa. The Syrian Democratic Forces (SDF), led by Kurdish People’s Protection Units (YPG), took over Manbij from ISIL in August 2016 with heavy air support by the US.

As an affiliate of the Kurdistan Workers’ Party (PKK), the YPG is considered a terrorist organisation in Turkey. In the past, the Turkish air force has hit YPG positions in Manbij, but a full military offensive on the city against one of the US’ key anti-ISIL allies would put Turkey in a complex diplomatic situation.

According to Kasapoglu, Turkey would not launch such an operation unless there are “favourable diplomatic conditions” to do so. After putting troops on the ground and waging a successful campaign against ISIL, Ankara’s diplomatic leverage within the western anti-ISIL coalition has grown, he notes.

In his opinion, the Turkish military might also focus on an offensive on Raqqa, which would be a much larger operation than the one in al-Bab.

But Raqqa is also a major target for the US that has been supporting SDF forces advancing on the city.

According to Bonsey there are currently discussions in Washington on how to best approach taking over Raqqa.

“Most American officials that I have spoken to and I think the general opinion in Washington is that the YPG and its allies are best equipped to take the city in the short run,” he says. “There are some in Washington who would rather take a more gradual approach and work with Turkey and Turkish backed-forces to take the city.”

Bonsey says that the US in the end is more likely to work with the YPG, but it is still under question. If Turkey proceeds with its operation against the Kurdish forces in Manbij or ISIL in Raqqa, it risks overstretching, he says.

Bonsey points out that if Turkey launches an offensive on Manbij and the Kurds, that could give ISIL an advantage and allow it to attack both the Kurdish and Turkish forces while they are engaged in fighting each other. 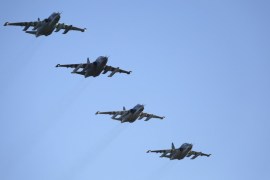 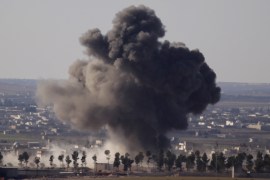 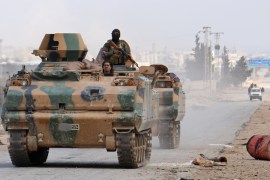