On Monday, August 30 at 19:30 GMT:
Nigeria’s government is struggling to tackle criminal gangs who have stepped up concerted attacks against village communities, schools, and colleges in northern states over the last eight months.

Gang members popularly characterised as ‘bandits’ have kidnapped more than 1,000 students alone since they began abducting civilians for ransom payments in greater numbers in December. While some children and young adults have been freed through mediation, in many cases families and school administrators have paid the attackers to secure their release. In one recent incident, kidnappers looking for ransom seized the negotiator sent to deliver payment.

With the central government of President Muhammadu Buhari and some state governors refusing to pay the gangs and many families unable to meet the ransom demands themselves, hundreds of people remain hostage. And with the gangs now expanding their presence across seven states including Zamfara, Kaduna, and Katsina, the central government is facing a security crisis as urgent as its years-long fight against armed groups such as Boko Haram and Islamic State West Africa Province. The upheaval is exacerbating long-running displacement of people across the north, with some families fleeing to other countries.

Security analysts say many of the gang members are allied with either ethnic Fulani herders or ethnic Hausa farmers who have fought each other for dwindling natural resources. The gangs have launched increasingly bold attacks as central and state authorities try to tackle them. In an unexpected raid on an elite military academy in Kaduna on August 24, suspected gang members killed two officers and kidnapped another.

Buhari has vowed a tough response to the attack. But although the air force says it has “neutralised” hundreds of suspected gang members in raids across northwestern Nigeria, in July gunmen shot down a military aircraft in Zamfara – highlighting that the gangs are well-armed and stand able to repel government efforts against them.

In this episode of The Stream, we will look at how people in northern Nigeria are coping amid the advance of the gangs and what can be done to improve security and safety.

In this episode of The Stream, we are joined by:
Bulama Bukarti, @bulamabukarti
Senior Analyst, Extremism Policy Unit, Tony Blair Institute for Global Change 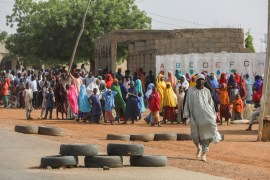 About 30 students kidnapped on outskirts of Kaduna city, in Nigeria’s fourth mass school abduction since December.