Marie Elias Ziade, or May, was a key Lebanese-Palestinian figure in the Arab literary scene in the early 20th century who firmly established herself as a vibrant female voice in what was clearly a man’s world at the time.

She was a journalist but also wrote fiction with strong female characters, poetry, political and cultural books and magazine articles, often on the condition of Arab women.

She questioned the social norms and cultural values of the period; in trying to tackle Arab patriarchy wrote: “We chant beautiful words in vain…words of freedom and liberty. If you, men of the East, keep the core of slavery in your homes, represented by your wives and daughters, will the children of slaves be free?”

“Women’s education was rare, if non-existent,” explains Lebanese poet Henry Zugheib. “When she joined this literary circle, she was highly cultured, not just from what she learned at school but also from the books she read. That’s why educating women was an obsession for her, as she herself was very cultured. That was a first sign of her rebellion against ignorance and her demands to educate girls at an early age.”

May played a pioneering role in “introducing feminism into Arab culture,” according to writer and critic Hossam Aql, who credits her as being “the first to use the term ‘the women’s cause’… She was the first professional writer to take a critical approach to women’s stories or novels written by Arab women.”

With a command of nine languages, “May Ziade was unrivalled during that period of Arabic literature, which was characterised by writing and translating,” says Zugheib. “She translated novels from German, French and Italian. She injected a new flavour, unknown to Arabic literature at the time.”

“The salons were famous for bringing opposites together, people from contradictory intellectual trends,” explains Mahmoud al-Dabaa, an academic and critic. “It was the first salon to gather different intellectual trends and discuss profound intellectual issues relating to Arab culture and literature. May had the ability to host all those contrasts.”

A romantic and idealist from an early age, Ziade exuded depth, femininity and charm – and so naturally won many admirers, both professional and amorous. “She fitted the perception of the ideal woman for those writers and thinkers,” notes art critic Essam Zakaria.

“It was normal they all fell in love with her or admired her a lot.”

Women's education was rare, if non-existent. When she joined this literary circle, she was highly cultured not just from what she learned at school but also from the books she read. That's why educating women was an obsession for her, as she herself was very cultured. That was a first sign of her rebellion against ignorance and her demands to educate girls at an early age.

However, she did not entertain any of these suitors because she was only in love with one man, the Lebanese poet and one of the Arab literary greats, Gibran Khalil Gibran.

The relationship between May and Gibran lasted for 19 years until Gibran’s death in 1931.

Extraordinarily, the two never met – but their relationship enriched Arabic epistolary literature with the most beautiful correspondence.

“Gibran was not only a creative man of literature but also a painter and musician,” contends Dr Hussein Hammouda, a literature teacher at Cairo University. “May also had experience in music and singing, so they had a lot in common. There’s a profound Sufi sense in both Gibran’s and May’s experience.”

Between 1930 and 1932, May suffered a series of personal losses – the death of her parents and above all, her beloved Gibran. She fell into a deep depression and returned to Lebanon where her relatives placed her in a psychiatric hospital to gain control over her estate.

A deeply shocked and heartbroken May painfully describes her torment: “In the name of life, my relatives put me in a madhouse to fade away gradually, and die slowly… a death of which no one could bear hearing the description. Nevertheless, on their rare visits, my relatives listened to me with pleasure as I described my sufferings and misery, begging them in vain to pity me and get me out of the mental asylum.”

A press campaign instigated by the Lebanese-American writer Amin al-Rihani proved crucial in freeing May from the mental institution. She was eventually able to leave thanks to a medical report asserting she was of sound mind. She returned to Cairo where she died on October 17, 1941.

Even though her family conspired against her and most of her literary circle abandoned her, May Ziade’s writings have inspired generations of women as well as male writers and thinkers. 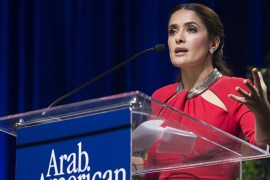 Khalil Gibran for a new generation

Does Salma Hayek’s animation film mark the beginning of a new reception for Gibran and his Prophet?