Trumpty Dumpty sat on US all,

Trumpty Dumpty had a bigly fall.

All the GOP’s foxes and all the Alt-Right men

When I was growing up, I always thought the president of the United States had to be smart, honest, kind and in possession of a higher sense of integrity. Later in the game, during the presidential debates, I was introduced by Hillary Clinton to the mysterious existence of public and private positioning, separated by a membrane of performance and political intelligence.

This is how John F Kennedy could be married to Jackie while having an affair with Marilyn Monroe, and how Ronald Reagan could play grandpa while ambushing affirmative action and keeping silent on apartheid in South Africa. It is also how Bill Clinton could play the saxophone on the Arsenio Hall show, endearing himself to African Americans, while enabling the building of private prisons to warehouse a generation of Black youth, and how Barack Obama could sing Amazing Grace at the funeral of a preacher murdered by the bullet of a racist, but send children-killing drones to Afghanistan and Yemen. These presidents knew how to skate on this icy membrane of contradiction without falling through it because they knew the games of politics, the magical ingredient of timing and the value of emotional restraint.

Donald Trump, as president, knows none of this. And this is why I am glad Trump is president. Let us be very clear; I am not fond of Mr Trump, his politics, his TV show or his ties. I like him as a person as much as I like electoral college democracy, the fake pursuit of American happiness and segregated healthcare. And no, I did not vote for him. But I do like his child-like, knee-jerk, unpolished responses, which Twitter enables and distributes at the speed of electricity.

I like the way he fumbles, gaffes and excretes bad, half-baked first-draft attempts at presidential insight in the midnight hours, revealing the not-so-secret fear and pain of white male angst at losing control to a colourful otherness. I think he may be the best thing that happened to America since super-white Wonder Bread and Mickey Mouse. Here are the top 5 reasons why I am excited Trump is president:

1. He is emotional and has no filter.

Some will confuse this lack of filter with honesty, others with a mental disorder. Whatever it is, I like it. This level of transparency and free expression might forever change the way the American public engages with their public officials. Trump’s raw emotional presentations – however racist, sexist, homophobic or xenophobic – are remarkable assets to understanding the brutish dynamics of power.

Hopefully, this will inspire righteous outrage, creative resistance and an innovative, social-media-driven way of organising quickly and impactfully, especially from the artists, activists and young folks who checked out under previous White House administrations.

Since Trump pushes from an emotional space of fear, he polarises Americans in so many ways. He pounced on Mexican immigrants, China, and Hillary Clinton to stimulate and polarise white working class from the Rust-Belt states to win him the election.

He inspired the Nazis, Neo-Confederates and Alt-Right to come to together to protest the removal of a Robert E Lee statue in Charlottesville, SC, where we saw them in action leaving one person dead. Trump will wake up the Left, the Democrats, independents and students to organise and counter in ways they were not inspired to do under Obama.

3.  He agitates African Americans and People of Colour.

Trump is no fan of Black America. In fact, Trump has repeatedly shown that Black Lives DO NOT Matter to him. Check his response to the Central Park 5 case and his work on the Birther movement. Because he believed he did not need the Black voice to win the election, I suspect he thinks African Americans are irrelevant, hence his decision not to meet with the National Association for the Advancement of Colored People (NAACP) at their national convention.

Perhaps it’s time for Black America, people of colour and other disenfranchised groups to look elsewhere, maybe internally, to move our agendas. His response to Charlottesville should make his racial politics very clear. My hope is that having a White Supremacist sympathiser in the White House will produce a strong, creative and effective counter-response and a new list of leaders ready for serious long-term action.

Trump’s policies and unfiltered self have forced leading CEOs to quit his manufacturing council and army leaders to offer support for transgender soldiers. Internationally, his craziness is beginning to demystify Europe’s romance with all things American. Even Germany and France have publicly shown wincing faces of disappointment.

And perhaps, many enemies of America – who may also be enemies of each other – are trading in suicide bombs for good seats to watch Trump implode, since they might think that the greatest act of terror against America was its own citizens voting him into office. When Trump is done, members of the one percent will be out in the streets protesting with the rest of us.

5. He is not afraid to fire folks.

James Comey, Anthony Scaramucci and Steven Bannon. Remember them? This is quite exciting. My hope is that under the right pressure he will fire the wrong person – which he may have already done – or maybe even fire himself.

I am convinced Trump’s personality, pathological politics and presidency will force threats of international war, domestic protests and social strokes around the issues of race, class, gender and sexuality. While I do not value watching the American presidency and bipartisan politics crash and burn, I am afraid, unfortunately, that this is what might be needed to realign the American people to the promise of the American constitution and inspirational spirit of the American Dream. Perhaps a system-reset (as a result of a meltdown led by President Trump aka Trumpty Dumpty) will not only save us from ourselves, but save us from leading the world into self-destruction through insane greed, gaslighting selfishness and Hollywood grandiosity.

Unstable leadership usually exposes the moral strength and composition of the rank and file.  And sometimes we are more focused, more capable and more organised when we fight against something, to protect something we love. I am convinced that Trump will inspire an interconnected response testing the spirit of the American people, overcoming the blood and sweat-stained divisions of US history and making the country more inclusive, more just, more emotionally intelligent and yes, even more “great”.

Trump started a fight for the heart and soul of America. Now it is time to meet that challenge. I am ready to fight back and I hope Americans who care about liberty, justice and each other are ready to fight back, too. The future of our nation and perhaps the world may depend on it.

John Sims, a Detroit native, is a multi-media artist, writer, producer and creator of Recoloration Proclamation, a 16-year multimedia project featuring a series of Confederate flag installations, The AfroDixieRemixes, the annual Burn and Bury Confederate Flag Memorial Day ritual and a forthcoming memoir. 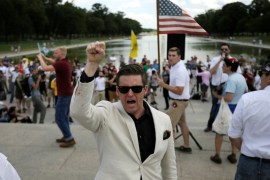 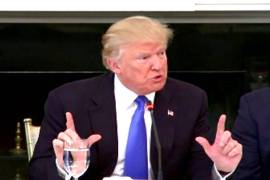 Will Donald Trump last through his first full term?

The US president’s approval ratings hit a new low as he is criticised by his fellow Republicans.