The concept of transactional politics has regained popularity after the election of Donald Trump as the President of the United States. It basically refers to a political practice where governments reciprocate each other’s actions in an equal measure, in other words establish a certain type of give-and-take politics.

The term may also refer to a businesslike attitude of governments when it comes to national spending. The idea is that a government will spend less on what it regards as “non-essential” matters such as arts and culture, foreign aid, etc. Instead it will increase military and defence, health and education budgets.

Moreover, transactional politics may be triggered by various sociopolitical and economic circumstances.

In the case of the US under Trump, it is mainly to address the expectations of his constituency. He promised the Americans that his foreign and domestic policies will embrace an “America first” attitude when engaging with foreign government and businesses.

He has argued for a long time that the US has spent on projects which are not in the best interest of US citizens.

He has used the example of US’ membership and contribution to the sustainability of NATO as an example. The US spends 3.6 percent of its gross domestic product (GDP) on defence, the highest percentage among member states.

The end of moral engagement and expenditure

The rise of Trump and the proliferation of right-wing politics in Europe is affecting the long-held idea of “moral engagement and expenditure” in the least developed and developing countries of the world.

It has also brought into question the inequitable global responsibility on matters that affect humanity, such as climate change. The argument brought forward by Trump is why must a responsibility of what should be a global issue be relegated to the US?

Media is another sector that has been seriously affected, whereas in the past some governments invested in the media to encourage the spread of freedom of expression, democracy and accountability.

More and more governments are investing in the media to pursue a certain political agenda. Trump uses the social media, mainly Twitter, to communicate his policies and his dissatisfaction with the global political status quo. The “effectiveness” and attraction of his tweets is gradually driving audiences away from the traditional media such as newspapers, radio stations and television channels.

He has criticised the media coverage of his administration. As a result, he has resorted to social media platforms to communicate. Social media has enabled many people, including politicians, to communicate with masses without filters, gatekeepers and intermediaries.

Social media is fast, efficient and, in most instances, free of charge. The speed in which news is transmitted through social media had a huge impact on the relevance of traditional media – it has made the once powerful platforms very vulnerable.

Decline of the traditional media

The traditional media is losing its ground and this will, in the long run, affect its revenue and viability.

Should this situation persist – and it looks like it will – many traditional media organisations may be compelled to either shut their doors or compromise on editorial independence. Moving forward, media funding is most likely to come with more conditions to fulfil and expectations to satisfy.

institutions with the main objective of pursuing government propaganda and ‘alternative truths’.”]

Moreover, the global economic slowdown has added strain to the functionality of the traditional media. When it comes to the broadcast media, there has been a widespread downsizing within many institutions, while others are forced to seek alternative funding to supplement their budgets – with most resorting to increases in advertising space.

This unfortunately may affect news and programming, and eventually have a negative impact on the independence of media as they are struggling to survive.

Broadcast media in particular is very expensive to sustain, and only big multinational companies with deep pockets can afford to maintain such projects, often through cross subsidisation of expenses.

The era of ‘quasi-independent media’

The only institutions within the traditional media environment that have managed to keep heads above the water have been the quasi-independent media institutions.

Increasingly governments are investing large sums of money in these institutions with the main objective of pursuing government propaganda and “alternative truths”.

The advent of quasi-independent media institutions could be traced back to governments’ discontentment with the news coverage of the mainstream Western media.

The emergence of institutions such as Russia Today, TRT World and CCTV provide different angles to news, especially when their respective countries are involved, and they have a clear agenda of pursuing certain government positions.

OPINION: Where is diversity in American newsrooms?

Most governments complain about the Western media’s stereotypes and the skewed coverage of their countries. Therefore, the quasi-independent media was meant to counter that narrative to present it as “an alternative narrative”.

Finally, there are certain basic guiding journalistic principles that need to be preserved, among them objectivity and balanced reporting.

The decrease in revenues as social media takes the centre stage, Trump’s demonisation of the traditional media and the pressures presented by quasi-independent media continue to test the commitment of journalists to these principles.

The survival of journalism is dependent on its ability to innovate and adapt to the new media platforms.

Failure to innovate may subject journalism to the trappings of transactional politics, which may have a devastating impact on global democracy. 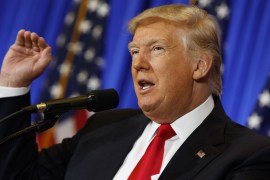