While Western countries swiftly united in a chorus of criticism against Russia’s invasion of Ukraine, Moscow’s allies reacted with milder tones as they find themselves walking a tightrope between security concerns and economic interests.

Ukrainians woke up on Friday to the sound of explosions as Russian troops are pressing deep into the country for the second day of a land, sea and air offensive that has so far killed more than 130 people and displaced at least 100,000 others.

Here is a look at how Russia’s traditional allies reacted to the Russian military action:

It took a day for India’s Prime Minister Narendra Modi to call for “an immediate cessation of violence” after Russian President Vladimir Putin’s announced war against Ukraine. In a phone call with Putin, Modi called for “concerted efforts from all sides”, but failed to take any action against India’s ally.

The two countries enjoy tight economic ties, further strengthened by a landmark meeting in December of last year when the two leaders signed a slew of bilateral defence agreements, including India’s procurement of more than 600,000 assault rifles from Russia.

A statement released on Thursday after the phone call stressed that the diplomatic teams of the two countries would continue regular contact “on issues of topical interest”.

The Indian leader reiterated “his long-standing conviction that the differences between Russia and the NATO group can only be resolved through honest and sincere dialogue”. Modi also expressed his concerns over the safety of the about 20,000 Indian students currently stranded in Ukraine.

Igor Polikha, the Ukrainian ambassador to India, expressed “deep dissatisfaction” with India’s position. “This is not the time for protocol-bound statements,” Polikha was quoted as saying by local media. 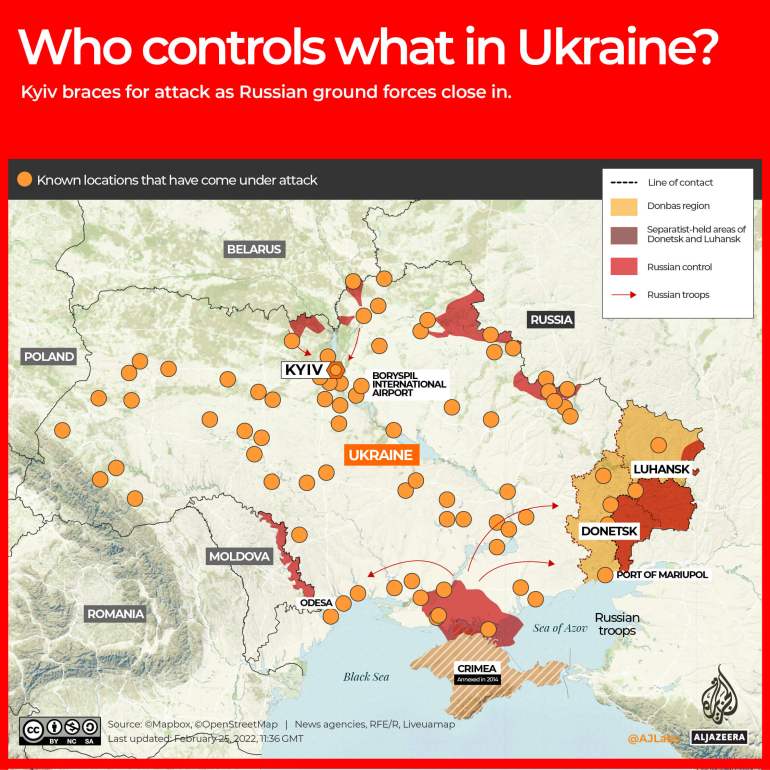 China has not officially taken a side as it enjoys good relations with Ukraine, cares about its business with Europe, and has found in Putin an ally.

The ongoing invasion is taking place just a few weeks after Putin and his Chinese counterpart were parading in Beijing in a great display of unity ahead of the opening of the Winter Olympics.

On that occasion, China reiterated that Russia’s security concerns were legitimate, accusing the United States of exacerbating tensions.

The two countries enjoy great business relations, on top of what observers have called “a personal chemistry”.

China said it will not provide Moscow with military support but it has been bolstering trade such as increasing imports of wheat from Russia on Thursday, a move that critics called an economic lifeline for Putin.

However, China’s foreign minister stressed on Friday that each country’s sovereignty should be respected, calling on parties to return to the negotiating table.

“They [Russia and China] need each other, but for China this [the invasion] is not in line with their idea of a stable world trying to create more trades, but rather that this is going to create more uncertainty,” Einar Tangen, a Beijing-based political analyst, told Al Jazeera.

Israel made a tepid condemnation of Putin’s move. In a short statement, Israeli Foreign Minister Yair Lapid condemned Russia’s move as “a serious violation of the international order”, but also stressed Israel’s “deep, long-lasting and good relations with Russia and with Ukraine”.

“There are hundreds of thousands of Jews in both countries. Maintaining their security and safety is at the top of our considerations,” Lapid said.

Itamar Rabinovich, a senior research fellow at Moshe Dayan Center for Middle Eastern and African Studies in Tel Aviv, said that Russia had allowed Israel “to pursue its war against Iran” inside Syria, while also not blocking arch foe Tehran “from pursuing its own ends” inside Israel’s northern neighbour, where it backs the Damascus regime.

Israel should not “jeopardise the delicate balance in our relationship with Russia”, Rabinovich told the AFP news agency.

Turkish President Recep Tayyip Erdogan has said Moscow’s military actions amount to a “heavy blow” to regional peace and stability and reiterated Turkey’s “call for a resolution of the problems between Russia and Ukraine”.

However, Turkish authorities have not used the words “condemnation” or “invasion” yet as they try to maintain good ties with the two countries – both neighbours via the Black Sea.

Turkey has long pressed for a diplomatic solution in a bid to defuse tensions between its fellow NATO members and Moscow.

While its NATO allies impose sanctions on Russia, analysts say Turkey is not expected to follow suit, similar to the situation in 2014 when it did not sanction Moscow over its annexation of Crimea even though it condemned the seizure of the peninsula, which is internationally recognised as Ukrainian soil.

Leaders of Kazakhstan, Uzbekistan, Kyrgyzstan and Tajikistan did not issue any official statements.

On the contrary, as Russian troops pressed towards the Ukrainian capital Kyiv, Kazakh President Kassym-Jomart Toqaev and Russian Prime Minister Mikhail Mishustin met to discuss how to preserve economic ties and trade amid the barrage of sanctions imposed by the West.

One in 10 citizens of Uzbekistan, Tajikistan and Kyrgyzstan works in Russia. Remittances – mainly from Russia – constitute 30 percent of the gross domestic product (GDP) of Tajikistan, 28 percent for Kyrgyzstan and almost 12 percent for Uzbekistan, according to the latest World Bank data.

Pakistani Prime Minister Imran Khan expressed concern over the economic fallout of the Ukraine conflict on developing countries in a meeting with Russian President Vladimir Putin in Moscow on Thursday, Pakistan’s foreign office said in a statement.

Khan was the first world leader to meet Putin since he ordered the launch of Russia’s attack on Ukraine, having arrived in Moscow for a previously planned visit just hours before the invasion began.

“The Prime Minister stressed that conflict was not in anyone’s interest, and that the developing countries were always hit the hardest economically in case of conflict,” the foreign office said.

Khan had gone to Moscow with the aim of enhancing economic ties with Russia, one of the world’s largest producers of gas, at a time when Pakistan’s energy needs are rising fast.

Myanmar’s military government said on Friday that the Russian invasion of Ukraine was “justified” and demonstrated Moscow’s position as a world power.

Government spokesman Zaw Min Tun said Moscow’s military had “carried out what is justified for the sustainability of their country’s sovereignty”.

“Russia shows its position to the world as a world power,” he added in the statement, which was also released in Russian.

Moscow is a major ally and arms supplier to Myanmar’s generals and has repeatedly shielded the isolated country at the United Nations.

He later told Moscow’s Defence Minister Sergei Shoigu that Myanmar’s army had “become one of the strongest in the region” thanks to his country’s help, according to Russian news agency TASS.

Venezuela blamed NATO and the US for the crisis in Ukraine.

President Nicolas Maduro said on Thursday that his government repudiated “the perverse plans that seek to surround Russia militarily and strategically”.

Venezuela’s foreign ministry said that NATO and the US had violated the Minsk agreements, a 2014 deal aimed at ending a war in Donbas, a separatist region in eastern Ukraine.

“The Bolivarian Republic of Venezuela expresses its worry over the worsening of the crisis in Ukraine, and laments the mockery and violation of the Minsk accords on the part of NATO, encouraged by the United States of America,” the ministry said in a statement.

“The derailment of these [Minsk] accords has violated international law and created strong threats against the Russian Federation, its territorial integrity and sovereignty, as well as impeded good relations between neighbouring countries.”

Translation: “From Venezuela, we repudiate the perverse plans that seek to surround Russia militarily and strategically. All support for President Putin and his people. We are sure that Russia will come out of this battle united and victorious, with the admiration of the brave peoples of the world.”

Cuba sharply criticised the US for imposing “the progressive expansion of NATO towards the borders of the Russian Federation” and called for a diplomatic solution to preserve international peace.

In a statement late on Tuesday, Cuba’s foreign ministry said the US had ramped up threats against Putin, aggravating the crisis. The Cuban statement did not specifically mention Russian advances into the separatist regions of eastern Ukraine.

“The US government has been threatening Russia for weeks and manipulating the international community about the dangers of an ‘imminent massive invasion’ of Ukraine,” the Cuban statement said. “It has supplied weapons and military technology, deployed troops to several countries in the region, applied unilateral and unjust sanctions, and threatened other reprisals.”

We call on the US and NATO to seriously & realistically heed the well-founded demands for security guarantees by Russia, which has the right to defend itself.#Cuba calls for a diplomatic solution through constructive & respectful dialogue.

Daniel Ortega of Nicaragua accused the US and Europe of “using Ukraine to provoke Russia”, which he said was merely “demanding security”.

Ortega was one of the first world leaders to back Russia’s stance over Ukraine. On Monday he said Putin was right to recognise two regions controlled by Moscow-backed separatists as independent.

“I am sure that if they do a referendum like the one carried out in Crimea, people will vote to annex the territories to Russia,” said Ortega, a long-time opponent of US influence in Central America.