Istanbul, Turkey – Shortly after Russian forces invaded Ukraine in the early hours of Thursday, the Ukrainian embassy in Ankara was quick to appeal to Turkey.

“The Russian Federation has started a war against Ukraine. Peaceful Ukrainian cities are being bombed. We call on our strategic partner Turkey and the friendly Turkish people to support us in this difficult time,” the embassy tweeted.

Later on Thursday, Turkish President Recep Tayyip Erdogan spoke to his Ukrainian counterpart, Volodymyr Zelenskyy, and condemned Russia’s invasion of Ukraine as a “heavy blow to regional peace and stability”.

“We reject Russia’s military operation,” he said in a televised speech after convening an emergency security meeting.

On Tuesday also, Turkey’s Ministry of Foreign Affairs had been quick to denounce Russia’s move to recognise the independence of two breakaway territories in the eastern Ukrainian region of Donbas.

“The decision of the Russian Federation to recognise the so-called Donetsk and Luhansk republics, in addition to contradicting the Minsk Agreements, constitutes a clear violation of Ukraine’s political unity and territorial integrity. The Russian Federation’s decision is unacceptable and we reject it,” the ministry had said in a statement.

Zelenskyy at the time thanked Erdogan in a tweet for “supporting [the] Ukrainian position on the latest provocative decisions of Russia”, using flag emojis in place of the names of the two countries, while the Kremlin said differing views on Ukraine will not be an obstacle to ongoing relations between Turkey and Russia. 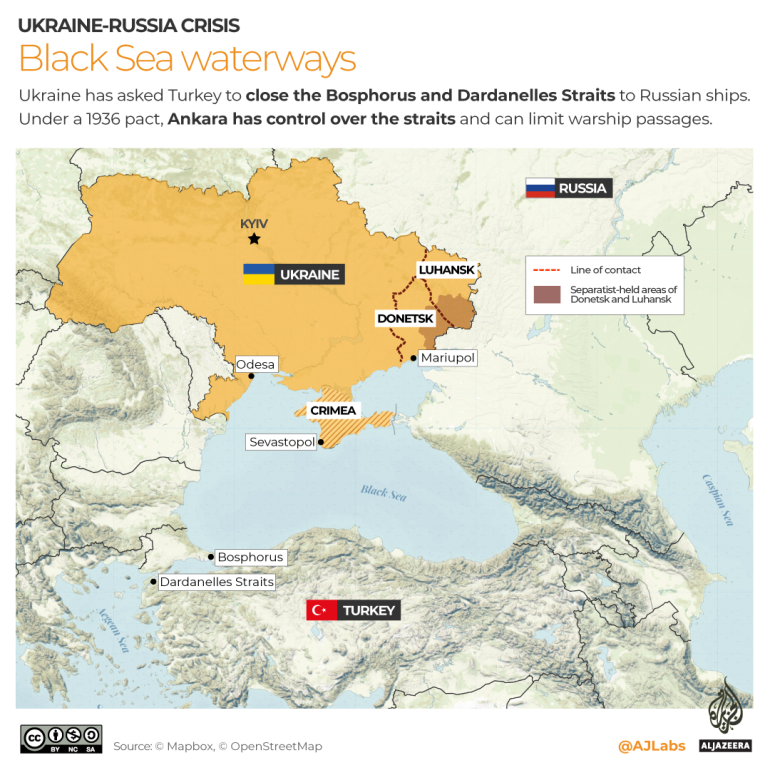 A neighbour to both Ukraine and Russia via the Black Sea, Turkey has long pressed for a diplomatic solution in a bid to defuse tensions between its fellow NATO members and Moscow.

Last month, Erdogan said Turkey was “ready to do whatever is necessary” to avoid a war that would hit close to home and called for “dialogue that will listen to Russia and eliminate their reasonable security concerns”.

But with fighting now raging in Ukraine, it seems unlikely that Ankara will be able to achieve any success in quelling the conflict. Nevertheless, analysts believe that Erdogan is keen to act as a mediator.

“Not surprisingly, Erdogan has been very eager to offer his services as an interlocutor between Russia and Ukraine. He would no doubt be thrilled if he could help resolve this crisis. However his efforts have had little impact on the real diplomacy taking place with the US and Europe – which of course still hasn’t been successful,” said Nicholas Danforth, a non-resident fellow at the Hellenic Foundation for European and Foreign Policy.

Others say that at this stage the Turkish president lacks any sway in the conflict.

“It wasn’t really something Erdogan could have mediated. I think he understands that, and his offer was mostly an expression of regret at what was about to happen,” said Selim Koru, an analyst at the Economic Policy Research Foundation of Turkey.

“Things have gone too far for Turkey to have any direct influence. Erdogan probably wants to get to the point when all the fighting that’s going to happen has happened, and he can see what he can do afterwards,” Koru added.

Erdogan had spoken on the phone with  Russian President Vladimir Putin on Wednesday, informing his counterpart that Ankara does not accept Moscow’s recognition of the breakaway republics. However, he chose his words carefully.

Ukraine and Russia are indeed key trade partners, with the latter supplying 40 percent of Turkey’s natural gas imports and a quarter of its petrol imports. The conflict between the two countries stands to harm Turkey’s already-beleaguered economy.

“The primary impact is economic. It’s touch and go as it is, and the interruption by war, as well as the Western sanctions that will inevitably be called on Russia, are going to make life very difficult in Ankara. After energy, food imports and tourism seem to be two of the most important areas affected. There’s also some strategic imports to the defence industry that are going to be affected, and that Turkey won’t be able to replace easily,” Koru said.

On Thursday, the Turkish lira took a hit following the news of the Russian attack, dropping from about 13.8 to 14.2 to the United States dollar.

Turkey’s position as a crucial NATO ally that also maintains an uneasy, complicated relationship with Russia means that Erdogan has to maintain a keen balancing act, one that may prove harmful to the country’s geopolitical influence.

While its NATO allies impose sanctions on Russia, analysts say Turkey is not expected to follow suit, similar to the situation in 2014 when it did not sanction Moscow over its annexation of Crimea even though it condemned the seizure of the peninsula, which is internationally recognised as Ukrainian soil. This remains a sensitive subject given shared cultural ties between Crimea and Turkey, which is home to a sizable population of Crimean Tatars whose ancestors were exiled by the Soviet Union in 1944.

“Turkey’s fence sitting will likely prove successful in mitigating the most damaging consequences from this conflict, but will come at the expense of the more ambitious role it seeks to play as a global power. If neither Turkish diplomacy nor Turkish drones have any impact on the course of the crisis, little is left of the hype surrounding Ankara’s new, more assertive foreign policy,” Danforth said.