Election Day is less than 24 hours away in the United States, where millions of voters are expected to cast their ballots on Tuesday in key midterms.

The vote to determine the next makeup of Congress comes as the country faces intense political polarisation and amid widespread concerns over a struggling economy, reproductive rights, and the future of democracy itself.

The results will also set the tone for the last two years of Democratic President Joe Biden’s term, as a strong Republican showing could upend his domestic and foreign policy plans.

Here, Al Jazeera lays out all you need to know:

What are the midterms?

The midterms take place two years after a presidential election, midway through a US president’s four-year term. On November 8, all 435 seats in the US House of Representatives will be contested while 35 Senators also will be elected.

While Biden’s name won’t be on any ballots, “the midterms are, at least partly, a referendum on the performance of the current president,” Alan Abramowitz, political science professor at Emory University, recently told Al Jazeera.

Read our US midterms 101 explainer, here.

In the lead-up to Tuesday’s vote, many Republican candidates have focused on the economy as Americans struggle amid rising costs of living. Democrats, for their part, are hoping their defence of reproductive rights and democratic institutions will translate into support at the ballot box.

Overall, the economy, abortion, immigration and democracy have been major topics of conversation ahead of the midterms.

Find a full rundown of the key issues – and where each party stands – here.

What economic issues are on voters’ minds?

For months, people in the US have raised concerns about skyrocketing inflation, spurred in part by global crises such as the war in Ukraine.

A Monmouth University poll from early October found that 82 percent of Americans said inflation was an “extremely or very important” issue for the government to tackle – making it the top issue on their radars ahead of the midterms.

Here, Al Jazeera breaks down the top five economic issues to watch while US voters tell us how soaring costs on everything from petrol to groceries are affecting their daily lives.

What has been said about immigration?

Many Republicans have adopted strong, anti-immigration language throughout the midterm campaign, seeking to blame Democrats for large numbers of asylum seekers arriving at the US’s southern border with Mexico.

Read more here about how the GOP is hoping its tough-on-immigration stance will garner support.

Will the midterm results have implications beyond the US?

The midterm campaigns have largely focused on domestic issues. But the results will affect the remainder of Biden’s first presidential term, including how the president will approach key foreign policy issues such as Ukraine.

More specifically, experts told Al Jazeera last month that Republican gains could exacerbate questions around whether to continue Washington’s robust support for the Ukrainian government in the face of Russia’s invasion.

What races should we be watching?

With 35 Senate seats up for grabs on Tuesday, Republicans are pushing to regain control of the key chamber of Congress.

While many of those seats are in Republican or Democratic strongholds, where each party’s respective candidates are all but guaranteed to win, some contests are expected to be extremely close – especially in so-called swing states.

Have a look at the 10 key Senate races to watch.

Are any other key posts up for grabs?

Arizona, Pennsylvania, Wisconsin: These are just some of the 36 US states that are electing their next governors on November 8.

In some key states, these governors will have outsized influence over key issues that have dominated the election cycle, such as abortion rights and access to voting.

How many people are expected to vote?

Nevertheless, the last midterm contest in 2018 was marked by higher-than-usual turnout, according to the US Census, which recorded an 11 percent increase from 2014. The census bureau said 53 percent of eligible voters participated in 2018, “the highest midterm turnout in four decades”.

Al Jazeera’s US midterms infographics are here to help break it all down. 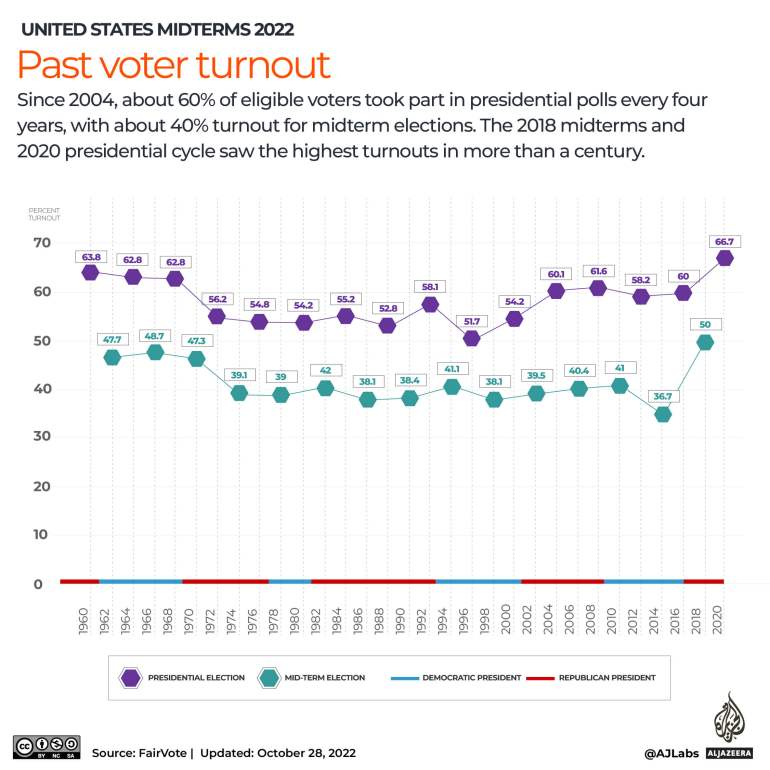 Are there any barriers to voting?

Over the past few years, several US states have enacted restrictions on voting. Those include curbs to mail-in ballots and measures that rights advocates say continue a long history of disenfranchising Black voters.

In the lead-up to the midterms, social justice groups are pushing to expand access to voting and election materials for people held in US jails. Read more about that effort here.

Meanwhile, Al Jazeera recently spoke to Joshua Ang Price, a former election commissioner in Arkansas’s largest district, about how barriers to voting have impacted marginalised communities in the US state.

Will the midterm results tell us anything else about the US political climate?

Democrats say the future of US democracy is at risk, as Republicans have nominated dozens of candidates who dispute the country’s 2020 presidential elections that Biden won over former President Donald Trump.

Al Jazeera recently spoke to experts who said that while the US system makes it highly unlikely these candidates will sway any future contests, election denialism does pose a threat: the erosion of public trust in democratic institutions.

Read all about that here.